Bailey: Sabres Have Reason To Smile For A Change 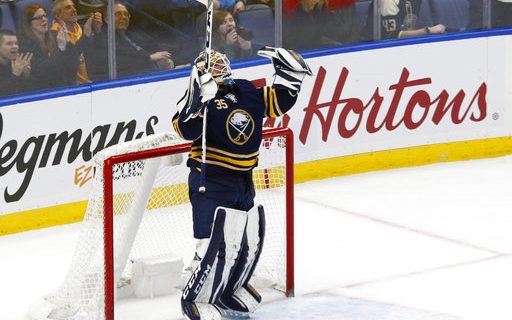 Soap operas don’t pack the drama that the Buffalo Sabres have given to their fans in the past few days.

On Tuesday, the Sabres played a stinker of a game in losing to Winnipeg. It was such a bad night that even coach Phil Housley used some choice words in describing how unsatisfied he was.

On Wednesday, Buffalo lost Zach Bogosian to injury during practice, a fact that was a little overshadowed by a fight between two teammates during the offday workout.

What could they do on Thursday to add to the drama of the week? Win a game.

That’s exactly what they did. The Sabres ended a five-game losing skid with a 3-1 win over the Columbus Blue Jackets before 18,071 at the KeyBank Center.

Buffalo even came up with some surprising guest stars on the night to add a twist to the plot. Linus Ullmark got the start, his first in the NHL, and now he has a win to go with it. Ullmark made 44 saves in an outstanding performance that left him more than satisfied.

“I’m very emotional inside,” Ullmark said. “It’s been my dream since last summer to get here, to come up and play. I’m very humble now. I’m very happy about it.”

Ullmark has earned the clichéd title of “goalie of the future,” especially as he’s been a huge part of what has been a successful season to date in Rochester. There’s no goalie controversy at the moment for the Sabres, but clearly the moment wasn’t too big for him.

Ullmark says he’s grown up quite a bit lately.

“Mostly as a person,” he said. “I come out every day and watch the pros in Buffalo and down there in Rochester, and I try to figure out what works for me.”

Housley added, “Just the confidence he has – he carried it up from Rochester. He fought through traffic, was getting to second shots. He really stepped up his game.”

Ullmark had some help from the team in front of him. Yes, the Blue Jackets piled up some shots at times. But usually, he had good looks at them as the Buffalo defense kept the Columbus attack on the perimeter.

“We didn’t give up many Grade-A chances,” Kyle Okposo said. “They had a few, but we didn’t have many second-chance opportunities.”

END OF THE SLUMP?

Okposo was the other surprise of the night. He scored the game-winning goal in the third period, as a bad bounce from a Columbus standpoint left Okposo with the puck in front of a vacated net.

“The second goal was a fortunate bounce, but we’ll take it,” said Okposo, who is up to 24 points on the season.

Okposo had the lead assist on the first goal of the game, as Benoit Pouliot had an easy time putting home a rebound. He hadn’t scored in a day short of a month, so the kind rebound was appreciated.

“I have to get back to what I was doing,” Pouliot said. “I have to be on the forecheck, and get some hits.”

Jack Eichel added an empty-net goal, and Brendan Guhle added an assist on the Okposo goal for his first NHL point.

The Sabres certainly didn’t want to go into the bye week with six straight losses. It will be back to work next Thursday in New York against the Rangers. The first half of the season was a dreary one, but at least the freshest memories of it will be good ones.

“We needed to get a win here,” Okposo said. “There was a lot of emotion this week.”