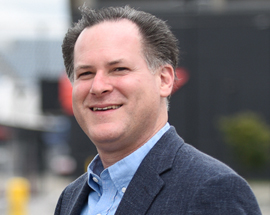 Paul Peck is sports broadcaster with over 30 years experience in TV and Radio. He served as sports anchor, reporter, and producer at WIVB for 24 years. In that role, he covered all four Buffalo Bills Super Bowls, the Buffalo Sabres in the Stanley Cup Finals, the NCAA Basketball Tournament and the Daytona 500. He has been the Voice of UB Bulls Football for 19 seasons, in addition to host of Bulls Athletics TV & Radio shows. Peck also served as the sideline reporter for the Buffalo Bills Radio Network, host of the bowling show “Beat The Champ” and announces college basketball for ESPN 3. He has also been the Master of Ceremonies for the Greater Buffalo Sports Hall of Fame, one of the largest sports banquets in WNY.

Paul is also involved in the local business community, having been a financial advisor at AXA Advisors, and is currently the Vice President of Sports Development at VSP Graphics Group.