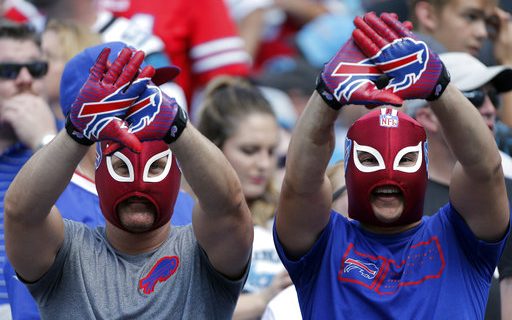 Not everyone in Buffalo is excited about the Bills being in the playoffs. Budd Bailey wonders why. (AP Photo/Bob Leverone)

On New Year’s Eve, my wife and I watched the finish of the Buffalo Bills’ regular season – the most dramatic moment in the past 25 years or so for the National Football League team. When the dust, er, snow had settled, the Bills were in the playoffs and there was fandemonium throughout Western New York.

Except where we went for a New Year’s Eve party. We may have been part of the only social gathering in this part of the state where the Bills barely came up in the conversation. The people didn’t know anything about what had happened in Miami and Baltimore, and didn’t care. That’s fine – I don’t need to give people a “Diner”-like examination on Bills’ history for them to be my friend. But it was a little unusual.

On Tuesday, someone wrote a letter to the editor of The Buffalo News. He wrote, “Professional sports are for the feeble minded. How do ‘we’ win or lose, when ‘we’ didn’t play or have anything to do with their game? Cheer on, people, for overpaid athletes.”

Funny – I know plenty of smart people, and many of them have a favorite sports team. Meanwhile, considering how much money the NFL generates, hardly anyone can be called “overpaid.”

Finally, on Thursday Rod Watson wrote a column for The Buffalo News about how he was sick of hearing about the Bills a few days after their win on Sunday. You can find the column easily enough on line. It’s the one that has a long, long list of comments – mostly from those who respectfully – and not so respectfully – disagreed with that viewpoint.

The sentence that probably got the most attention was “We can’t possibly be so psychologically pathetic that having a football team make the playoffs for the first time in 18 seasons becomes the most important thing in town. Or are we?”

I expected to see many reactions to Sunday night’s events. Apathy and anger were not included.

THE JOY OF ROOTING

Watson’s column deserves the most discussion. Let’s start with a disclaimer. I worked on the same floor of The News as Rod for several years, but I don’t know him at all. Our longest conversation probably was “thank you” when one of us was done with the copying machine.

Yes, a little perspective on life should be a prerequisite to being a sports fan (or anything else). As the late basketball coach Al McGuire said, it’s only important to win in war and surgery. If you’re depressed over a Bills’ loss for days, you need a booster shot of insight. And for those who think a losing sports team is a bad advertisement for a city nationally, consider this: Does anyone judge the virtues of New York City by the play of the Knicks and Nets?

But I think I can make a case for the joys of rooting in sports, and not just because I made a living for four decades in journalism because of that enthusiasm. Many of us started playing sports partly because they are inherently fun, and partly because of the extra joy that comes with victory in a competition. It might be my neighborhood vs. yours, my high school vs. yours, my college vs. yours, or my region (the pros) vs. yours. If you can’t actually participate, and your chances shrink as you go up the ladder, you can still root for an individual or team. What’s more, you can do it for the rest of your life – and share vicariously in the joy.

And that is exactly the point. How many parts of life have definitive outcomes on a regular basis, especially ones that cut across most cultural lines?

Many people follow regular routines, where milestones are rare and progress frequently goes unseen. They go to work, they study in school, they raise families, and so on. “How was your day, dear?” “Same old, same old.”

Sports are different. Every game can put a smile on the faces of exiting fans, and every season offers at least the hope that something magical will happen. The odds are small that lightning will strike in any given season, but it’s worth celebrating when it does. How many people talked to like-minded friends this week when the Bills made the playoffs? Bunches.

It’s all the sweeter when there’s a long wait, no matter how painful it was along the way. The Bills missed the playoffs for 17 seasons, and that was forever for anyone in college or younger. Droughts are no fun while they are in progress but celebrated forever when they end. Ask fans of the Red Sox and Cubs about that, and ask Bills’ fans how they might feel when their favorite football team wins a Super Bowl.

And, is there anything in society that brings a community together like sports? I can’t think of it. A Western New Yorker can be in Clarence or Costa Rica, but if he or she sees someone with a Bills shirt on, that person can be a target for a friendly conversation. Those feelings became even more universal when women joined the chats in large numbers about 50 years ago. It’s not a party unless everyone is invited.

Yes, Rod, we have large problems in our society, and in many cases we’re not even talking with each other about solutions – let alone solving them. But the fortunes of our favorite teams offer not an avoidance of those problems, but rather a temporary escape from them. Most of us are well-rounded enough to know that. And those fans don’t need to apologize to anyone for their interest and enthusiasm. They had a wonderful moment this week; let it linger.

The last word goes to Bob Ryan, the former sports columnist of The Boston Globe, who never saw a game – particularly basketball – he didn’t like:

“So it is an appropriate time for us to pause in silent prayer for those forlorn, pitiable people among us who — yes, I know this is almost impossible for you and me to comprehend — are NOT sports fans. I mean, how sad is that?”