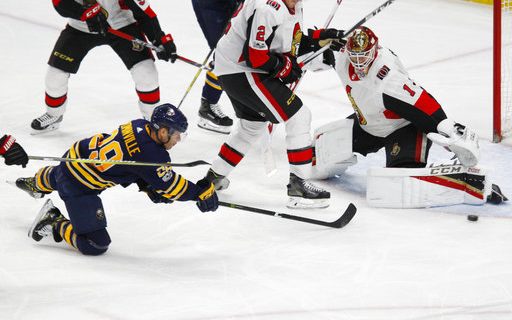 For the time being, Western New Yorkers can wear their “One Buffalo” shirts without irony.
The hockey team joined the winners’ club on Tuesday night with a 3-2 win over the Ottawa Senators. You can say in complete honesty that it’s only the team’s third win in its last 15 starts, and the problems of a terrible start haven’t gone away.

But on the other hand, you can say in complete honesty that the Sabres have picked up a total of six out of a possible eight points in their past four games. That is their best such streak of the season.

No one is ready to claim that the team is has fully turned the proverbial corner. But maybe, for the first time in a long time, there is a bit of a reason for optimism.

“This is something we want to build on, get some momentum,” Benoit Pouliot said.
“We’re sticking to the gameplan better right now,” Kyle Okposo said. “We’re starting to execute better. We’ve been hitting the middle man coming up the ice, and generating some offense.”

The highlight of the game for the Sabres and their fans – the attendance was announced at 17,454, but clearly some of them stayed home to watch on TV under an electric blanket – was a dominant second period. After a scoreless first period, Buffalo broke loose with three straight goals.

Pouliot started the outburst with a rather weak backhander that eluded Mike Condon. There was nothing cheap about the next goal, though. Ryan O’Reilly hit Okposo with a big-time pass through traffic in the slot, and Okposo converted to make it 2-0.

“It was nice to finally get rewarded,” the winger said. “Ryan and I are not where we want to be on offense. We got some chances, and hopefully they’ll start going in.”

Buffalo displayed some good penalty-killing later in the period when Ottawa had about three minutes of power-play time, including a minute of a five-on-three advantage. Robin Lehner made a couple good saves, and the penalty-killers did the rest.

From there, the Sabres added a power-play goal – something that wasn’t turning up on the scoresheet with regularity earlier in the season. Evander Kane did the honors, and the team left the ice after the second period to a relatively rousing ovation.

“It was nice to give the fans something to cheer,” Okposo said. “They’ve been awesome this year. They are just starving for a winner.”

It seemed like a good time to look up the last time the Sabres had won a game by three goals – last March, in Toronto – but Buffalo has rarely done things the easy way this season. The Sabres gave up two goals in the third period, but the Senators couldn’t get one last puck by Lehner to tie the contest.

It’s been that sort of stretch for Ottawa. The Senators were 8-3-5 after 16 games, and they dropped to 9-13-7 after Tuesday’s loss. A 1-10-2 stretch can spoil a season’s hopes in a hurry.
The Sabres aren’t feeling sorry for Ottawa, of course. After a string of home games against mostly very good teams, Buffalo capitalized on an opponent that was ripe for the taking.

“We have to worry about our own team,” Housley said. “We needed this win. It was important for our fans, and for the guys in our room.”

The Sabres head to Philadelphia for a Thursday night game with the Flyers. Then it is back home on Friday to play Carolina.