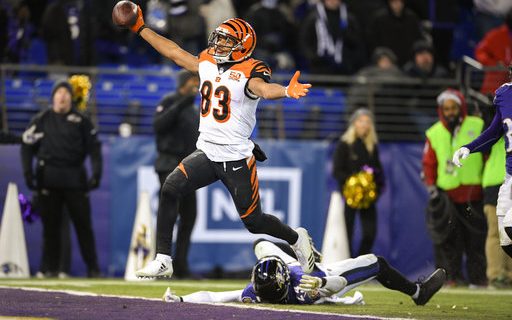 Around 8 p.m. on Sunday, I was on the phone with one of my best high school friends, who was watching the Bills’ game in a bar in Boulder, Colorado. After a couple of minutes of general conversation, there was a pause – and then all I could hear at the other end was bedlam as the Bengals scored their unforgettable touchdown against the Ravens. With that, my friend came back on the phone and shouted, “I just hugged two guys that I don’t even know!”

And the best part of the night is that almost everyone in Western New York has a similar story. What were you doing when the Bills qualified for the playoffs for the first time since 1999?

It was all so unlikely, dating back to August. Remember when people thought that the Bills were tanking when they traded Sammy Watkins and Ron Darby? The Bills started the season well, had a big hiccup with some one-sided losses, but still were alive on the last day of the regular season. Every Bills’ fan would have been happy about the progress the team had shown, and been optimistic about the future, if the team’s season had ended Sunday night with a win over Miami.

And it certainly looked like that was the case after 7:30 p.m., when the Ravens – needing only to beat the Bengals to grab the last available playoff spot – pulled ahead of Cincinnati. It was especially true in the final minute, when the Bengals faced a fourth-and-12 situation on the Baltimore 49. Somehow, Andy Dalton found Tyler Boyd for a touchdown pass, and the Bills could pack for Jacksonville.

The National Football League had moved the starting time of the Bills-Dolphins game back to 4:25 p.m. to line up with the other three games in the wild-card picture. That was to make sure no team had an advantage by playing early or late, but it had the effect of giving all concerned a chance at a memorable moment. Remember in 2011 when Evan Longoria of the Tampa Bay Rays hit a walk-off homer in the last play of the baseball season to send his team to the playoffs? You hope for such moments, but they rarely come. This time it did.

And the television ratings must have been staggering. It’s not as if many people were outside in 4-degree weather if they could help it. I’d guess that some restaurant owners were upset that the Bills’ gametime had been moved back, potentially cutting into their New Year’s Eve plans and profits. Let’s hope for their sake that people bought much more expensive champagne than usual as a result of Sunday’s outcome.

All that was left to do was to figure out where the moment ranked on the all-time list of “Top Five Moments to be a Bills’ Fan.” I’ll drop the two AFL championships from the selection process if only because they are so obvious.

Buffalo had gone 0 for the 1970s against Miami, losing 20 straight. The Bills earned a 17-7 win that was followed by the fans storming the field and tearing down the goalposts. Buffalo had a couple of other memorable wins that season – an overtime home triumph over the Rams, a last-second win to claim a division title against the 49ers – but the Dolphins game was filled with joy.

Considering this was a season-ending game with no playoff implications, this was a very satisfying moment. O.J. Simpson first broke the NFL rushing record, held by Jim Brown, in the game with the Jets on the “frozen tundra” of Shea Stadium. Then he went after 2,000 yards for the year, and reached it late in the game.

It’s interesting that this is the only moment on the list that was prompted by a game that the Bills weren’t playing. And remember – if Joe Webb doesn’t lead the Bills to an overtime touchdown in the snow against the Colts, we’re not having this discussion.

The Bills made quite a statement with their one-sided win over the Raiders in Rich Stadium to qualify for the Super Bowl for the first time. One of the best parts was that Buffalo had a 41-3 lead at halftime. It was one of the most dominating performances in league history, and it let fans think about reaching the NFL championship game for the entire second half. The anticipation was delicious.

It was 35-3, Houston, in the third quarter. The Bills didn’t have Jim Kelly for the entire game, and Thurman Thomas had been sidelined by injury. You know what happened – 41-38, Buffalo, in overtime.