Buffalo Sports By The Numbers: #31

We are counting from 99 to 0 to determine who’s the best Buffalo athlete to wear each number.  It’s Buffalo Sports By The Numbers here on Buffalo Sports Page.

We’ll have a new number and athlete every day this summer.  Each story also includes reaction from the Buffalo Sports Page staff, and a way to catch up on numbers you’ve missed.

After every 10 numbers, a Sylvester & Peck On Sports podcast will feature Budd Bailey and the guys reacting to the selections.  The latest edition, recapping 49-40, is available now.

Bob Lanier, St. Bonaventure. The greatest Bonnie of them all, he led the team to the Final Four of the NCAA basketball tournament in 1970. What if he hadn’t gotten hurt in the Regional? Bob had a great NBA career as well. Others: Daren Puppa, Sabres; Jairus Byrd, Bills; Swen Nater, Braves.

Paul Peck’s Digit Discussion:  The #31 is very significant in Buffalo Bills history, even if no prominent player ever wore it.  On the original logo, when the team was named in 1960 after Buffalo Bill Cody, the Bills player was wearing a #31 uniform.  For that reason, the number was never given out.  No one wore it for the first 30 years of the franchise’s history, other than in 1969 when Preston Ridlehuber wore it for part of one game when his regular jersey ripped. 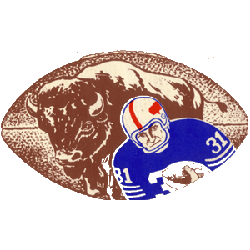 That is until 1991, when the Bills drafted cornerback J.D. Williams from Fresno State.  He had worn #31 in college and asked to wear it with the Bills.  Knowing the number had never been given out, the team’s equipment managers went right to owner Ralph Wilson and asked if it was OK to let Williams wear the number.  Wilson said fine, and that’s why he’s the first regular player to wear the number.

Missed any of the previous numbers from 99 to 32?  Visit the Buffalo Sports By The Numbers section on the home page.