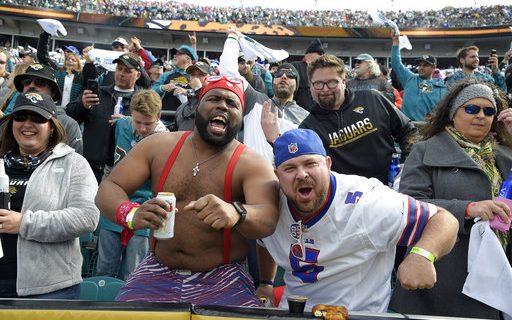 Buffalo Bills fans cheer while surrounded by Jacksonville Jaguars fans in the stands during the first half of an NFL wild-card playoff football game Sunday, Jan. 7, 2018, in Jacksonville, Fla. (AP Photo/Phelan M. Ebenhack)

It seems that there is this assumption out there that the Bills will start a new drought this year. After making the playoffs last year many seem to think the Bills will not do it again this year. In this article let’s break down the Bills chances to go back to the playoffs. Remember the AFC is top heavy and the 6th best team in the AFC doesn’t have to be an elite team.

I see the Steelers running away with this division. Not sure Ben Roethlisberger will play five more years but he does seem motivated after the Steelers drafted Mason Rudolph. The Ravens will move on from Joe Flacco after this year. I see this being his last year and Lamar Jackson taking over after a mediocre season. The Browns will be much improved and I see them winning about six games. Can’t believe the Bengals still have Marvin Lewis as their head coach. Bold prediction Lewis, John Harbaugh and Hue Jackson all get fired after this year. The North plays the NFC South, which is a tough match-up.

I predict two teams come out of this division just like last year. The difference is the two teams this year will be Houston and Jacksonville. I see the Texans as a healthy much improved team. JJ Watt, Deshaun Watson and Whitney Mercilus are all back. The addition of Tyrann Mathieu makes this defense even better. The Titans fall back. I’m not a Marcus Mariota fan. He took a huge step back last year throwing more interceptions than touchdowns. Indy will be better but Andrew Luck’s health is still a question for me.

This division is a crapshoot. The Chargers on paper should win the division. They appear to be the best team. Kansas City’s hopes ride on Patrick Mahomes. I believe he has a bright future but can’t see him being better than Alex Smith in year one. Denver and Oakland could go either way. I thought the Raiders had a horrible draft and didn’t improve their roster much. How good is Denver? How much do you like Case Keenum? What does it tell you about Keenum that the Vikings never gave him a true vote of confidence last year? I could see the Keenum free agent signing being a disaster.

I think the Bills have their best chance of making the playoffs if the go with AJ McCarron this year as their QB. This is best for the organization and Josh Allen. The AFC South takes one of the two wild card spots. The North is out because of tough schedule and other than Pittsburgh I think the rest of the division is poor. This means the second wild card comes down to the Bills beating out the second best team in the West. Let’s assume the Chargers win the West. Is it out of the question the Bills could be better than Denver, Oakland and Kansas City? I can’t see why some fans and media members believe this has to be a step back year. The back end of the AFC sucks! This can never be stated enough. Being the sixth best team in this conference isn’t that hard to do. Making the playoffs clearly is a realistic goal.