Gaughan: Players That Must Prove At Combine 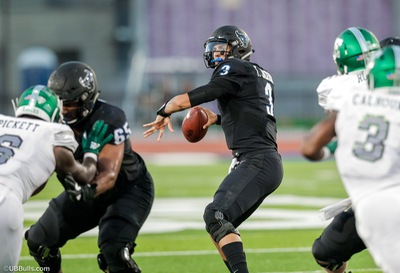 The Scouting Combine starts this week in Indianapolis.  Bob Gaughan takes a look at the players he thinks have the most to prove to the NFL.

To me the QB race after the first three off the board is still up in the air. Dwayne Haskins of Ohio State, Kyler Murray of Oklahoma and Drew Lock of Missouri should go 1,2.3 in that order. After that many people project Duke QB Daniel Jones to go fourth. In terms of pure physical talent I think Tyree Jackson is clearly better than Jones. So what does Tyree have to do? I believe two things. First he has to show it on the field. Accuracy is a concern especially on the short to medium passes. Tyree needs to take away these concerns on the field. The other area all QB’s need to impress is in the interviews. The off camera interviews for the quarterback position is critical. We won’t see his but we will hear the rumors of who impressed on the blackboard and who didn’t. Tyree needs to be one that wins the interviews.

Speed, speed and more speed. First and foremost that what is going to make or break it for Johnson. Everyone is interested in how fast he runs the 40. Right now I see Johnson in most mock drafts going around the start of round 3. If he runs a fast 40 time he will for sure move up. Johnson like all receivers will still need to impress as a route runner and with his hands. Health was a concern this year for Johnson but when fully healthy I felt he was one of the best receivers in college football. This is a big week for him because with a good combine he could move up dramatically.

At this point I think we’ve all seen the pictures going around the internet. Metcalf looks more like a body builder than a receiver. Some are concerned about this. We all remember David Boston that bulked up too much and became less effective as a WR. I think Metcalf will do well. He certainly has the bloodlines. Older readers will remember the Cardinals great Terry Metcalf. I can see this going either way. He could star and people will call him the next Calvin Johnson or he could go way of David Boston.

Nick Bosa has a lot riding on this week. He’s been targeted as a top 3 pick since the beginning of the year. Problem is he missed most of the year. He needs to prove not only is he 100 percent healthy but that he still has the physical tools to be a top 3 pick. We have the numbers that his older brother Joey put up at the combine. Does he match the numbers or even do better? If he matches his brother then he will go top three and make his money.

Here’s a guy that the Bills might be interested in. He is considered by many as the top tackle in the draft. Some mocks have the Bills taking him at nine. Problem for him is arm length. The standard for tackles is 34 inches. Williams is a bit smaller framed guy and some think his arm length will only reach 33 inches. As a result some teams think Williams would be a better guard than a tackle. That could cost him to slip down a little. I still expect him to go in the first round but it will be interesting if he comes out of the combine as a tackle or a guard.