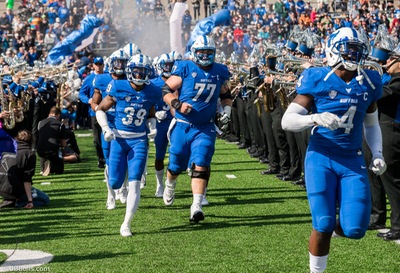 UB at Ohio on Wednesday

Can you say MAC Championship game? The Bulls head to Athens Ohio in search of the MAC East title. It would take a total collapse for the Bulls not to be in the title game. The Bulls would have to lose to Ohio and to lowly Bowling Green. So I would make plans that the Bulls are going to be playing in the MAC Championship on Friday November 30th. The Bulls wrapped up their home schedule with a 48-14 destruction of Kent State. Jaret Patterson ran for 187 yards in the game. All of those yards came in the first half. The Bulls for first time in school history are 9-1 on the season and 6-0 in MAC play. Dating back to last year the Bulls have won 12 of their last 13 games. Ohio is led by legendary head coach Frank Solich. The Bobcats dropped a 30-28 decision this week to Miami-Ohio. Ohio’s offense is led by duel threat QB Nathan Rourke. Rourke has thrown for over 1,900 yards and 19 TD’s and ran for over 600 yards and eight rushing TD’s. Last year the Bulls were able to contain Rourke in a 31-24 victory at UB Stadium. Kick-off is set for 7pm.

The Buckeyes took care of business in East Lansing winning with defense. Michigan State was held under 300 yards of offense. The truth is Ohio State doesn’t look like one of the four best teams in the country. If they win out they might get in the final four but this team still has issues. Running the football is at the top of the list. A showdown with Michigan looks likely for the Big Ten East in two weeks.

The second ranked Tigers took care of business in a dominating fashion. Boston College couldn’t move the ball at all against the Tigers great defense. The Eagles only score came on a punt return for a TD. Clemson held BC to eight first downs and only 113 yards of total offense. BC lost their QB Anthony Brown on its first possession. The loss of Brown doomed their offense. Trevor Lawrence accounted for two TD’s to lead the Clemson attack.

Brandon Wimbush playing for the injured Ian Book threw three first half TD’s in the Irish win. Dexter Williams then took over and ran for a career-high 202 yards. It was a cold day in South Bend with temperatures around 27 degrees. No way a team from down south was winning this one. Notre Dame will have a much tougher task next week when they travel to Yankee Stadium to play number 13 Syracuse.

*West Virginia didn’t lose a step after last week’s emotional victory over Texas. Will Grier took another step forward for the Heisman with 3 TD’s passes in a 47-10 romp over TCU.

*Alabama’s defense hasn’t allowed a point in over 9 quarters after shutting out Mississippi State 24-0. So much for the LSU hangover.

*Pitt rushed for 492 yards in beating Virginia Tech 52-22. The Panthers look like they will face Clemson in the ACC title game. Canisius High School product Qadree Ollison had 235 of those yards.

*Houston defensive star Ed Oliver continues to be sidelined with an injury. The Cougars defense can use him after dropping two straight and giving up 59 points to Temple in a loss.

*It seems like just yesterday I was singing the praise of Kentucky and they were playing for possibly the SEC East title. The 11th ranked Wildcats were awful in losing to rival Tennessee 24-7.

*Northwestern will represent the Big 10 West in the title game after upsetting Iowa 14-10. Wildcats are only 6-4 overall but are 6-1 in the Big 10.

*Oklahoma won the thrilling Bedlam battle 48-47. Oklahoma State decided to go for 2 after scoring a touchdown with a minute to play. I liked the call the way the offenses were playing but a poor pass doomed what should have been the winning conversion.

*Washington State held the ball for over 41 minutes in topping Colorado 31-7. The Cougars are the class of the Pac 12 and are now 9-1.

*Georgia’s offense better get things figured out before the SEC title game vs Alabama. The Bulldogs settle for field goals too much in a 27-10 win over Auburn.

*Two years ago UAB didn’t have a football team. The Blazers are now 9-1 after beating Southern Miss 26-23. Bill Clark has done a wonderful job with that program.