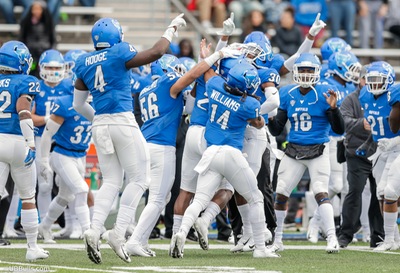 Each Sunday, Bob Gaughan wraps up the college football weekend with the games and teams you need to know about.

UB becomes bowl eligible with this win. This is only the fourth time in school history that the Bulls are bowl eligible. The Bulls have won games with many different offensive players playing the star this year. This game was won by the defense. Akron never got into the redzone all day. Akron only had 235 yards of offense. Tyree Jackson threw a touchdown and ran for another. Jackson for the first time all year used his legs. He threw for 212 yards but ran for 57. KJ Osborn caught six balls for 116 yards. Anthony Johnson did return from his hamstring injury to catch 2 balls for 44 yards. Akron has a tough run defense. The Bulls struggled running in the first half, but kept with it and starting to gain yards on the ground in the second half. Jaret Patterson led the ground game with 91 yards and a touchdown. The Bulls are now 6-1 on the year. This is the first time since 1959 that they are 6-1. The Bulls are 3-0 in MAC play and next week travel to Toledo to take on the Rockets in the Glass Bowl. Toledo comes into the game after being upset by Eastern Michigan 28-26. The Rockets are now 3-3 on the season.

Just when I declare last week that Notre Dame will be in the final four the Irish roll out a stinker at home to Pitt and barely survive. Ian Book hit Miles Boykin for a 25-yard TD pass with 5:43 to go to give the Irish the victory. The Irish were held to 80 yards rushing on the day. Pitt had one long 99-yard drive in the first quarter but were held to 143 yards of offense the rest of the day.

Penn State still had hopes of being in the final four after a tough loss to Ohio State. Call it the Ohio State hangover but the Lions looked out of sorts all day in losing to the unranked Spartans at home. Brain Lewerke threw a 25-yard TD pass to Felton Davis with 19 seconds left to win the game for MSU. This is the second game in a row that Penn State couldn’t hold a fourth quarter lead. This is a bad loss considering the Spartans were banged up coming into the game.

LSU’s offense has struggled at times this year. Who saw them putting up 475 yards of offense against the best defense in the country? Not me. Joe Burrow passed for 200 yards and had two short touchdown runs for the Tigers. Ed Orgeron went for five fourth and shorts during the game and converted on four of them leading to 13 points. The Tigers staying aggressive all day was a key. LSU’s pass rush was a difference maker as well. LSU had only 3 sacks but gave constant pressure all day. Both teams are now 6-1 on the season.

*Nebraska blew a 10-point lead late in the fourth quarter to remain winless. Northwestern tops the Cornhuskers 34-31 to send Nebraska to 0-6 on the season.

*UCF has a comeback from 16 points down to remain unbeaten with a 31-30 victory over Memphis. UCF has now won 19 straight games.

*Oregon should be undefeated if not for blowing a game against Stanford earlier in the year. The Ducks beat number 7 Washington 30-27 in OT.

*West Virginia coach Dana Holgorsen called his offense the worst he’s ever seen in 30 years of coaching. Iowa State held WV to 152 yards of offense in a 30-14 romp over the 6th ranked Mountaineers.

*Ed Oliver is the best defensive tackle in next year’s draft. In Houston’s 42-20 win over East Carolina he had 5 tackles for loss, 2 sacks and a forced fumble.

*Chip Kelly gets his first win as a UCLA coach. The Bruins dominate Cal 37-7.

*Jim Harbaugh got his dominating prime time win. Michigan had been lacking a good win in prime in the Harbaugh era recently. Michigan was all over Wisconsin 38-13 in the Big House.