Photo Essay: The Last Dance at the Aud

The buzzer sounds on the Sabres' win over the Whalers, the season, and the Aud.

I saw a note on Twitter this morning from John Boutet that this is the 25th anniversary of the Sabres’ last game at the Aud.

Twenty-five years? Really? I still miss the place. I once said in an interview that everyone came to Memorial Auditorium in anticipation of having a good time – what with hockey, basketball, concerts, graduations, etc. That has held up pretty well, as the memories are mostly good.

I covered the last game against the Hartford Whalers, brought my camera, and got there early. Here are a few photos of that evening that you might like: 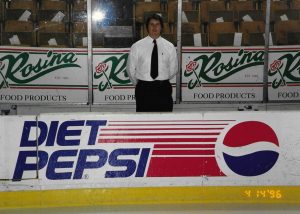 Press box guard Shawn Ryan enjoys the view from the penalty box before the game. I think Rob Ray still has the door. 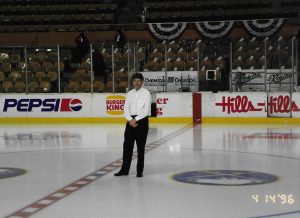 Who could resist the chance to pose at center ice on this particular occasion? 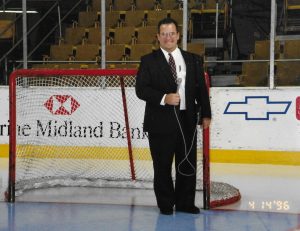 Radio announcer Dave Miller should have tried calling the game from this perspective. 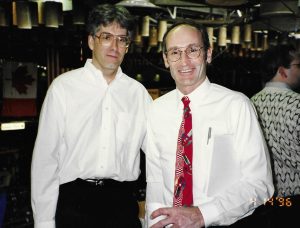 If there was a nicer guy in hockey than Craig Ramsay, I’m not sure I’ve met him. 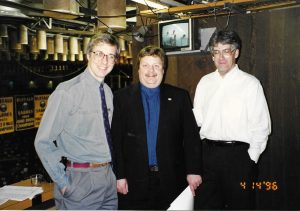 Dave Kerner, Paul Hamilton and I first worked together at WEBR Radio. They always were good company at Aud events. 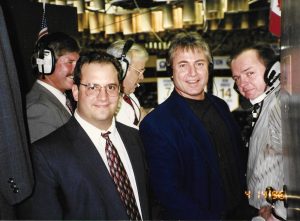 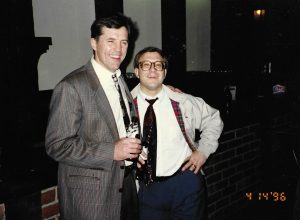 Terry Martin and Mitch Korn celebrate the last game at “The Poor Man’s Aud Club” near the front entrance. 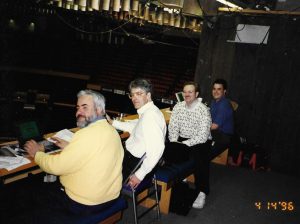 My favorite photo from the night – it’s of the reporters that “turned off the lights at the Aud.” I’m joined by Jim Kelley, Mike Haim and Bucky Gleason.