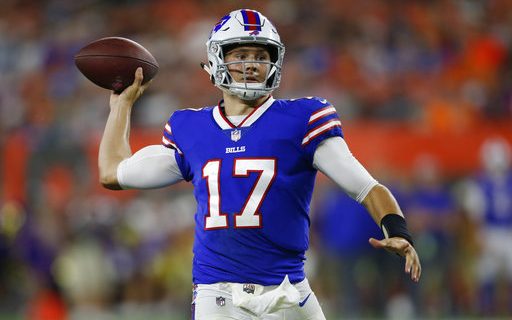 This is a very important year for Bills quarterback Josh Allen. The progression from year one to year two is one that all quarterbacks need to make. So what are some realistic goals for Josh Allen.

This is the area that he will always be looked at. It was the area of concern coming out of college. Allen completed 53% of his passes last year. That is well below the league average of 65%. I don’t think Allen will ever be a 65% passer. Unless he throws more quick screens that help boast your percentage the type of throws he makes lend to a lower percentage. I would be happy with a 60% passer. This year I want to see him boast the number to the 58% range.
A lower drop rate will help Allen this year. Allen had 20 passes dropped last year. His drop rate percentage was 6.3%. That was the second highest drop rate in the league. The addition of Cole Beasley and John Brown should help. Beasley has one of the best hands in the league. The added strength up front in the offensive line will be a welcomed addition as well.

With Allen I believe that you need to add in his rushing touchdowns as well in this category. Last year he had eight rushing touchdowns. It would be unfair to him to not count these in his ratio. I know the Bills would like him to run less this year but his ability to get into the end zone as they get closer to the goal line is still a threat that is a huge asset for Buffalo. Allen last year had 18 touchdowns and 12 interceptions. Not bad when you consider that he had the worst offensive line and the worst receivers in football to go along with no running game. This year I would like to see and improvement to a 2:1 ratio of touchdowns to interceptions. Somewhere in the area of 24:12 or 26:13 would be a nice improvement.

Some of this is dictated on a better running game. The addition of Frank Gore down by the end zone may take opportunities away from Allen. It will be better for the team if the Bills can run the ball into the end zone. This needs to be factored into his numbers at the end of the year.

The Bills were 5-6 with Allen as their starting QB last year. Not bad considering they were 1-4 without him. The Bills have added so many pieces to the roster via free agency. Some of these pieces are minor but the addition of Mitch Morse, John Brown and Cole Beasley should make this offense be able to compete. A easier schedule is on tap for Buffalo this year. Last year’s schedule was brutal. A two game improvement should be a very realistic goal. So let’s make 8-8 the goal for this year for Allen.

How He Looks in Comparison to His Competition

It’s worth noting that many national people believe Darnold is more poised to take a leap this year than Allen. Darnold did have a higher completion percentage and threw for more yards last year. However he had 18 TD’s and 15 interceptions last year. The Jets were 4-9 with him as a starter. The Jets considered benching him at one point. Josh Allen should stand toe to toe with Darnold and look his equal if not better.

It will be nice this year that you will be comparing Allen not just to the quarterback class of 2018 but to all of the quarterbacks in the league. The question will be at the end of the day when the majority of games are complete do you believe that the Bills had the better QB on the field? This ultimately will be how we judge Josh Allen this year.