I’m never going to be able to watch “The Price is Right” again without thinking of Dave Miller.

Dave’s passing has gone unnoticed locally in the media, which is something of a shame. He was one of the great characters in the business, who had elements of fun and sadness mixed together to form a memorably large character and personality. Dave no doubt would be pleased that his television appearance was at the top of a remembrance, because he was thrilled to appear on that show.

Dave always was a fan of “The Price is Right.” At some point he figured out that he might be able to become a contestant when the Sabres traveled to Los Angeles for a game. Somehow, Miller made it work. He found out the Sabres were off when the show was available, registered to be in the audience, was picked to participate, and won the first round of pricing – netting him a refrigerator.  Alas, his luck ended there.  I can still picture him on television, walking off the stage after losing the showcase spin-off. (He proudly showed the episode at his end-of-the-season party later that year.)  The memory of meeting Bob Barker certainly lasted longer than the refrigerator.

David graduated from St. Francis High School and SUNY-Geneseo, and held a variety of broadcasting jobs – including time with the Empire Sports Network – before landing that position with the Sabres in 1995. He worked the pregame, intermissions and postgame sessions, and traveled with the team. That’s when I met him, and found him to be always entertaining – sometimes even intentionally. His hearty laugh, particularly when sweetened by a couple of adult beverages, could have been used on a laugh track.

We settled on one ground rule pretty quickly during a road trip with the Sabres. When the team played badly, which it often did in 1995-96, Dave often started the postgame interview with a softball question for the coach that tried to put a good spin on things. He said he felt obligated to be positive since he was working for the team’s radio station. I pointed out that I was under no such obligation, so we quickly reached agreement for me to ask the first question – which was a variation of “So what went horribly wrong this time?” It was smooth sailing between us from there.

Dave even gave me a scoop once. Dave casually mentioned one afternoon while we walked on a Miami-area beach that Pat LaFontaine was out for the season. I bailed out of the walk as soon as I could, raced back to my hotel, and got that previously undisclosed story out. Thanks, pal.

The swamps of New Jersey

During those years, Dave was in his late Twenties, a man who had plenty of enthusiasm but little discipline. By coincidence, two stories about him centered on visits to New Jersey. One time Dave arrived back at the hotel in East Rutherford via taxi. The problem was that he had spent all his money, and the cab driver wouldn’t accept a Discover card for the fare. Dave started knocking on friends’ hotel room doors late that night, trying to come up with the money.

At another time, Dave was only a few hundred yards from the hotel when he decided it was late and time to call it quits for the night. He had two choices: take the long way by staying on the road, or take a shortcut on the grass directly to the hotel.  Dave chose the latter. The problem was that the shortcut dropped down into something of a swamp. When he walked into the lobby, he was soaked and his pants and shoes were a mess – and of course, he was spotted by someone connected to the team. It’s difficult to keep such stories quiet around a hockey team.

One moment in Dave’s on-air history lives on with the broadcast crew of the time. The team was in Peterborough, Ontario, for an exhibition game. Dave had sent some audio cuts to the engineer at the radio station to play during the pregame show. Miller introduced them, and they were both followed by silence. A good board operator was hard to find, apparently. After the second one, Miller burst out with “Jesus Christ! … And for all I know, we could still be on the air!” Sure enough, he was – and a Sabre executive who was listening to it all in the Bills’ parking lot after a football game was not amused. But Dave was forgiven – it was hard not to forgive him for almost anything.

Some of the stories about Dave in those years were like that – funny, but headshaking. One time the Sabres had started a road trip by landing in Edmonton, where a casino was located a little too close to the team hotel. Dave couldn’t resist a visit, and soon he had gone through his entire per diem payment for the road trip. Dixon Ward and Rob Ray took up a collection they called “The Dave Miller Relief Fund” to get him through the rest of the trip. (The players seem to take to Dave during that era, as did head coach Ted Nolan.)

Pete Weber remembers the time on the road that his phone rang at 1:30 in the morning. “Hi, Pete, it’s Dave. Want to come out for a drink?” Pete answered, “Let me guess – you’re at a casino, and you don’t have money for a cab.” Dave acknowledged that fact, and Pete arranged for a happy ending to the story.

And through it all, Dave kept us updated on Kramer. That was his dog, named after the Seinfeld character. Every so often, Dave would look a little sad, and someone would ask what’s wrong. “I miss my dog,” he replied.  We all thought it was a little odd that Dave would talk that way about Kramer and not his wife (eventually his ex-wife). Then again, one time Kramer came to the Niagara Falls Airport to greet Dave and the rest of the team upon arrival. The dog was so excited to see Dave leave the plane that it started barking and pooping at the same time.  We should all receive such loyalty.

The traveling party ended in 1997. The Sabres opted to stop doing a separate radio broadcast and starting using the television feed on radio. That sent Miller, Weber and Danny Gare out the door. At least they all landed on their feet. Dave picked up a job as the play-by-play announcer of the Cleveland Lumberjacks of the American Hockey League. That was a good gig while it lasted, but it didn’t last for long. Dave eventually returned to the Buffalo area, and I’d occasionally run into him. He did some work on announcing games on cable, and he’d also serve as a DJ at such functions as the Italian Festival on Hertel Avenue in Buffalo. We always had a lot of laughs together during our brief meetings.

At other times, there was always Facebook. We communicated occasionally there – often about sporting events, where he gleefully commented about the latest debacle for the Sabres or the Pegulas. David still loved the games, though, and he loved music as well.

But sometimes, Dave’s problems came out on that part of social media as well. Last year he credited a few close friends for being the reason that he was still alive. There was talk about him changing his last name because of a huge family dispute. And every so often, Dave would check in to ask for prayers before some sort of medical procedure. One time, Dave showed up at a Niagara hockey game when he wasn’t well, and a coworker sent him to the hospital. That person found out later that if Dave hadn’t been examined that night, he probably would have died. I guess it only delayed matters for a too-short period of time.

I guess my best look into Dave’s personality came a little less than two years ago. He had started to write an autobiography as something of a precautionary tale for others, and he wanted an opinion about how an early chapter was constructed. It was a lot like Dave – outsized and funny and disorganized and tragic. I told him to continued to write down his thoughts and memories, and worry about making it coherent later.

Now he won’t have the chance to finish that story. Dave died without any savings or insurance. Friend Kerry Esford has been trying to raise money to pay for his funeral and a memorial service though a GoFundMe website.  If you remember listening to Dave back in the day or are even merely a Sabres fan, I’m sure a few dollars sent that way would be very much appreciated.

Dave packed a lot of living into his too-short life. Things will be a little more boring without him around; I think he’d like that legacy. 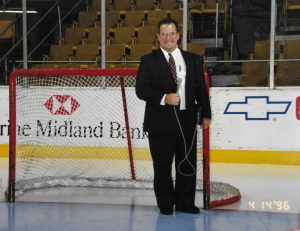 Dave Miller poses in front of the net before the Sabres’ last night in Memorial Auditorium.

Great Story Budd. Anyone that met Dave, loved Dave. He was a unique individual who always seemed to make you laugh and scratch your head at the same time… but in a funny way. Thanks for writing.

Hi. I’m just now finding out about Dave’s passing. He was my housemate in Geneseo and was responsible for getting me a do job at our station WGSU. We lost touch over the years but the sound of his laugh has always stayed with me. I’m sad to see that he had such financial and personal problems. When you’re in college, you have such hopes for the future. I wish his story ended on more of a high note but I’m glad I found your tribute.
Alicia Noonan