It was again my honor and pleasure to introduce the newest members of the Western New York Running Hall of Fame. It came after a race in the Elmwood Village that drew a record number of entrants. Here’s the text of my remarks about the three runners:

Allison Carr is in a class by herself in the field of runners. That not only applies to races, but it also comes to complaints.

One time while chatting with her after a competition, she told me that she didn’t particularly like seeing a photograph of herself in the next day’s newspaper. Her reason was that after running for a few miles, she wasn’t exactly in picture-perfect form. Allison often had a tired look on her face, her running clothes were covered with sweat, and her hair looked like it was going in several directions at the same time.

Speaking for the 95 percent of runners who have never even seen someone else cross a finish line first – let alone win a race, I must say I didn’t have a lot of sympathy for her. My response reflected that attitude: “Maybe if you wouldn’t win so many races, you wouldn’t have this problem.” Allison nodded as if to say, well, that’s probably true.

From there, it was back to winning for Carr. Other runners have gone through a ritual of posting great times, and then walking over to congratulate Allison on another victory. She didn’t win every race she entered, but she collected race medals like the rest of us collected t-shirts.

Allison was one of the endless stream of good runners that have come out of East Aurora High School as if the school had a copying machine. She went to Canisius College from there, setting five different school records. Carr was on the Metro Athletic’s 40th anniversary all-star team for her work. Then it was on to Penn State University, where he earned All-Big Ten honors.

After college, Allison became a regular on the local racing circuit. Her excellence was something like a fine watch, always keeping perfect time. The victory count went past 150 races, including three times in a single week. That’s not good; that’s absurd. And Carr didn’t simply win The Buffalo News Runner of the Year trophy once. She did it eight times in 11 years. That’s not good; that’s historic.

Allison had some help in those years. When her children were small, she’d chase them around when she wasn’t working or racing. That’s a training program that will never appear in Runner’s World magazine. Carr has done some coaching as well.

We all knew that Allison would be honored by this group at some point – it was just a matter of when. That time is now. Please welcome to the Hall of Fame the fast – and photogenic – Allison Carr.

Way back in May, John Grandits was relaxing at home on Friday night when the phone rang. It was someone from the Grand Island Half Marathon, who had just found out that a late cancellation had left the organizing crew short-handed. Would he mind driving out and lending a hand at a ridiculously early hour the next morning?

They called the right man. John got up the next day shortly after sunrise, and crossed over the Grand Island bridge to go to work. He had answered the call for local running, something he had done in so many different ways over the years for so many different people and groups.

It all started innocently enough. Grandits was a runner in high school, if only to keep in top shape while participating in rowing. His interest took a fateful turn one day in May, 1978. The first running boom had led to more races in communities across America, and John took the fateful step of filling out an entry form for the event at Delaware Park. As someone once said, the difference between a runner and a jogger is a racing form. John did the race, and liked it.

As he turned up at other races, he actually noticed the people working behind the scenes to make sure the event ran smoothly. Eventually, Grandits decided he could start a race of his own. In 1981, that race – the Vietnam Veterans Scholarship Run – began. It eventually raised more than $40,000 for the children of local veterans.

Already, that was more than most people do for running. But John wasn’t done with the sport; he was only getting started. Grandits helped runners train for marathons. He’s been on more committees than he can count, and that doesn’t include the informal advice he’s given to other race directors. John measured more than 115 courses for races over the years. And did I mention that he has run 19 marathons?

Every step of the way, John has packed two things with him: his sense of humor, and his smile. That means virtually everyone in the running community looks forward to seeing him. We missed those qualities over the summer when Grandits had some health problems. We may have taken his presence at races for granted at times, but his absence reminded us of the traits that made him one of the most beloved figures in our group. Today he’s back where he belongs – with all of his many friends at a race. They say in one voice, welcome to the Hall of Fame, John Grandits.

One day in the late spring, Bill Maloney checked his cell phone for messages. This particular time, he had one from a number he didn’t recognize. The message said it was from a former running columnist of The Buffalo News, and he wanted to talk to him soon. Bill’s reaction was puzzlement. “Why does he want to talk to me?” he wondered.

When the two finally connected, Bill said he was free the night of September 2 – but asked why it mattered. He was told to keep the date open, because he’d be going into the Western New York Running Hall of Fame. Well, if there was a happier person in the seven adjoining counties at any point this year, I’d like to meet him or her. Maloney said that it was a huge thrill for a “working stiff” to gain such an honor. Yet, his record of achievement was anything but pedestrian.

Bill’s running journey began back in high school. He attended Canisius, and set school records at one mile and two miles. The latter time held up for about 10 years, an eternity as these things go. Maloney also set a cross-country course record at Delaware Park. The event is still taking place, but the course and distance have changed. That means Maloney will have that record forever. Immortality sometimes comes in strange packages. The good Fathers at Canisius eventually decided that Bill’s achievements were worth saluting, and he went into the school’s Hall of Fame.

Maloney took his running talents a few blocks away at Canisius College – doubling up on that particular name. Maybe he just wanted to save money on t-shirts. The school records kept coming on Main Street just like they did on Delaware Ave. In fact, he set one in his very first race among college students. Bill graduated in 1986, and was put in the college’s Hall of Fame in 1998.

His best work, however, may have been on his own – and that’s saying something. Maloney just won almost of all of the major races that were held in the 1980s. That list includes the Shamrock, Run, the Subaru Four-Mile Chase, and the Cole’s Race. For the times that he needed to get a little bit more exercise, Bill finished 10 marathons. He also served as a coach at D’Youville.

If you are wondering, Bill may not be winning any races these days, but he’s enjoys being a part of the local running family. As his working life and running career have shown, there is honor to be found by simply showing up for work every single day, month after month, year after year. Tonight is just another moment in that journey, albeit a sweet one. So welcome to another finish line, Bill Maloney. 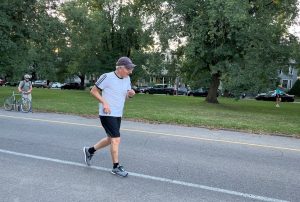 The Hall of Fame race has been taking place since 2011, and Jack Syracuse hasn’t missed one yet. He rebounding from heart problems in the spring to take part in Friday’s event. (Photo by Mike Beato)