The Stanley Cup Final begins tonight and a compelling matchup between two franchises who are normally division rivals in a non-COVID world awaits hockey fans.

The Tampa Bay Lightning, a team that has been among the best squads in the National Hockey League for the last 10 years, are winners of the Prince of Wales Trophy for the third time in seven years and are looking to become just the third repeat Stanley Cup champion in the last 24 seasons (the 2015-16 and ‘16-17 Pittsburgh Penguins and the 1996-97 and ‘97-98 Detroit Red Wings are the others). Thanks to series wins over the Florida Panthers, Carolina Hurricanes and New York Islanders, they are also attempting to win the third championship in franchise history.

The Clarence Campbell Bowl-winning Montreal Canadiens, meanwhile, are in the Final for the first time since winning the Cup in 1993 and have been red-hot in postseason play. They have gotten to this point by coming back from a 3-1 series deficit against the Toronto Maple Leafs, sweeping the Winnipeg Jets and upsetting the Vegas Golden Knights in six games.

This matchup should be quite entertaining. Here’s the low-down on each team going into Game One tonight: 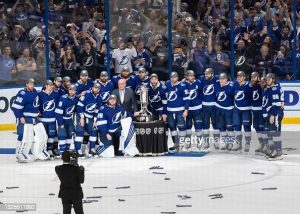 TAMPA, FLORIDA – JUNE 25: The Tampa Bay Lightning pose with the Prince of Wales Trophy after their 1-0 win against the New York Islanders in Game Seven of the NHL Stanley Cup Semifinals during the 2021 NHL Stanley Cup Finals at Amalie Arena on June 25, 2021 in Tampa, Florida. (Photo by Mike Carlson/Getty Images)

The reigning champions and a powerhouse in the Eastern Conference over the last decade, the Lightning are deeper than they have ever been. From top to bottom, Tampa has few weaknesses and have a legitimate chance to bring home the bacon for a second straight year.

Youngsters like Brayden Point, Mikhail Sergachev, Yanni Gourde and Anthony Cirelli and imports like Barclay Goodrow, Blake Coleman and Ryan McDonagh have joined Steven Stamkos, Nikita Kucherov, Ondrej Palat, Tyler Johnson and Alex Killorn to build a juggernaut. Andrei Vasilevskiy is widely regarded as the best goaltender in the NHL and Victor Hedman is the reigning Conn Smythe Trophy winner as the playoffs’ Most Valuable Player.

One longtime criticism of the Bolts is that they were always pretty but not gritty – meaning they were long on talent, but short on toughness. Thanks to moves by general manager Julien BriseBois and coach Jon Cooper in recent years to bring in some sandpaper in the form of Goodrow, Coleman, Pat Maroon and Luke Schenn, Tampa Bay now has a much more complete roster than in years past.

The Lightning’s biggest weapon this postseason has been their power play. Having connected on 20 of 53 chances (a 37.7 percentage rate), only the 1980-81 New York Islanders, who rode a 37.8 conversion percentage to the second of their four straight Cups in the early ‘80s, have been better in league history. 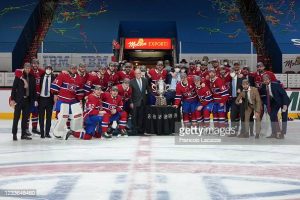 MONTREAL, QC – June 24: The Montreal Canadiens pose with the Clarence S. Campbell Bowl after defeating the Vegas Golden Knights 3-2 during the first overtime period in Game Six of the Stanley Cup Semifinals of the 2021 Stanley Cup Playoffs at Bell Centre on June 24, 2021 in Montreal, Quebec (Photo by Shafique Bakush/NHLI via Getty Images)

After an up-and-down beginning to the year Canadiens coach Claude Julien was let go in favor of Dominique Ducharme and Montreal continued to be so-so in regular season play. However, since the postseason began the Habs have been scorching-hot – resulting in the team becoming the third straight to reach the Final after making an in-season coaching change following the St. Louis Blues’ ousting of Mike Yeo for Craig Berube two years ago and the Dallas Stars’ dismissal of Jim Montgomery for Rick Bowness last season.

Up front Montreal is led by Phillip Danault, Brendan Gallagher, Nick Suzuki, Cole Caufield and Jesperi Kotkaniemi, while the Habs’ headliners on the back end are captain Shea Weber and Jeff Petry. Pickups from outside the organization like Tyler Toffoli, Josh Anderson, Corey Perry and Eric Staal have given the Canadiens some added veteran scoring punch as well.

But what has boosted the Habs’ postseason success is the turnaround of Carey Price. Price, the former league MVP, endured two of the worst regular seasons of his career but has rediscovered his status as one of hockey’s elite goaltenders.

The Canadiens may have the kryptonite to match Tampa Bay’s recent success with the man-advantage. Their penalty killing unit hasn’t allowed a power play goal in their last 13 games while killing off 30 straight power plays (the longest streak in NHL history). Overall in these playoffs Montreal has killed off 43 of 46 man-advantages – a rate of 93.5 percent – and only the 2004 Detroit Red Wings and 2019 Dallas Stars were more successful. To boot, the Habs have also scored four times while shorthanded in these playoffs – no team has ever had a net positive penalty kill in the history of the Stanley Cup playoffs.

Lightning in six. Montreal will give the Bolts all they can handle, but Tampa Bay will come out of the series as back-to-back champions.