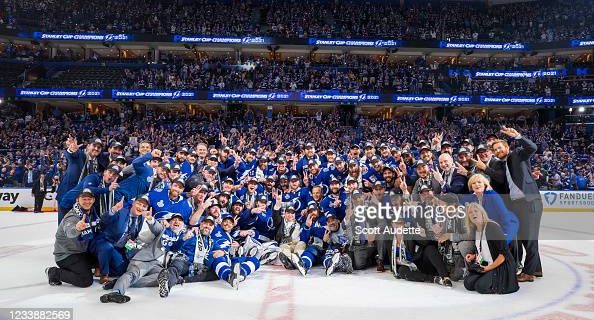 TAMPA, FL - JULY 7: The Tampa Bay Lightning celebrate winning the Stanley Cup after the defeating the Montreal Canadiens in Game Five to win the best of seven game series 4-1 during the Stanley Cup Final of the 2021 Stanley Cup Playoffs at Amalie Arena on July 7, 2021 in Tampa, Florida. (Photo by Scott Audette/NHLI via Getty Images)

The 2022 Stanley Cup Final kicks off tonight and – at least on paper – this year’s edition is shaping up to be one of the best matchups in league history.

The Tampa Bay Lightning, a team that has been among the best squads in the National Hockey League for more than a decade, are winners of the Prince of Wales Trophy for the fourth time in eight years and are looking to become the first NHL team since the 1980-83 New York Islanders to win three consecutive Stanley Cups. Thanks to series wins over the Toronto Maple Leafs, Florida Panthers, and New York Rangers, Tampa is also attempting to win the fourth championship in franchise history (2020-21, 2019-20 and 2003-04 are the other years in which they won the Cup) and are coming off a season in which they reached the Eastern Conference Final for the seventh time in the last 12 years.

Meanwhile the Clarence Campbell Bowl-winning Colorado Avalanche are in the Final for the first time in 21 years. Ending the 2021-22 regular season with the best record in the Western Conference, the Avs are aiming to take home the Cup for the third time since they moved to Denver from Quebec City (1995-96 and 2000-01 were their first two title seasons). They got here by sweeping the Nashville Predators and Edmonton Oilers and upending the St. Louis Blues in six games, and appeared in the Western Conference Final for the first time in 20 years – ironically, that 20-year drought came after the Avs got to the NHL’s final-four round six times in their first seven seasons in the Mile High City.

It doesn’t get much better than this. Here’s the scoop on each team going into Game One tonight: 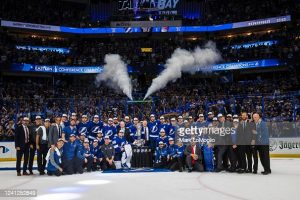 TAMPA, FL – JUNE 11: The Tampa Bay Lightning celebrate the series win against the New York Rangers with the Prince of Wales Trophy after Game Six of the Eastern Conference Final of the 2022 Stanley Cup Playoffs at Amalie Arena on June 11, 2022 in Tampa, Florida. (Photo by Mark LoMoglio/NHLI via Getty Images)

The two-time reigning champions and a powerhouse in the Eastern Conference over the last decade, the Lightning are deeper than they have ever been. From top to bottom, Tampa has few weaknesses and have a legitimate chance to be the NHL’s first threepeat champion in nearly 40 years.

One criticism of the Bolts in recent years is that they were always pretty but not gritty – meaning they were long on talent, but short on toughness. Thanks to moves by general manager Julien BriseBois and coach Jon Cooper in recent years to bring in some sandpaper in the form of Goodrow, Coleman, and Pat Maroon, Tampa Bay now has a much more complete roster than in years past. The losses of Johnson, Gourde, Coleman and Goodrow this past summer were made up by BriseBois bringing in veterans with Cup Final experience like Corey Perry and Pierre-Edouard Bellemare and younger pieces in Brandon Hagel and Nick Paul – resulting in coach Jon Cooper’s bunch not missing a beat. 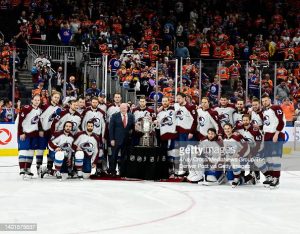 Few teams in the NHL had such a dichotomy on their team between their offensive and defensive talent for years like the Colorado Avalanche did. Blessed with studs at forward like Nathan MacKinnon, Mikko Rantanen, Andre Burakovsky, Nazem Kadri and captain Gabriel Landeskog, the Avs certainly lit up scoreboards. But Colorado didn’t have much on defense, nor much depth up front.

That has changed in recent times with Cale Makar, Devon Toews and Samuel Girard (out for the rest of the postseason with an injury) arriving, allowing coach Jared Bednar to push rearguards like Erik Johnson, Jack Johnson and Bowen Byram into ideal roles on the back end. Valeri Nichushkin, Artturi Lehkonen, Darren Helm, Andrew Cogliano, J.T. Compher and Josh Manson have become reliable supporting characters and the underrated duo of Darcy Kuemper and Pavel Francouz are the Avs’ starters in net.

Lightning in seven. The Avs have the one of the most explosive offenses in the league and are pretty solid defensively, but the Bolts can match Colorado in their skater depth – especially now that Brayden Point has returned from injury. They also have the advantage in net and behind the bench, as Vasilevsky and Cooper are the league’s cream of the crop. Either way it should go down to the wire.