TONY’S TAKE – A PREVIEW OF BILLS-JAGUARS 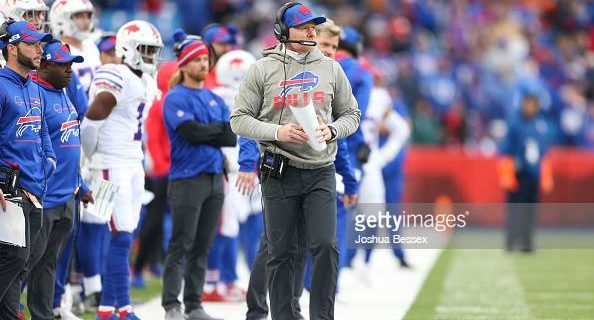 Welcome to Week Nine of the 2021 NFL season. Here at Buffalo Sports Page, we will attempt to inform and educate our readers about the Buffalo Bills’ upcoming opponent and what each team might do to emerge victorious.

The Bills’ eighth game of 2021 will take place at TIAA Bank Field in Jacksonville, Florida as they face the Jacksonville Jaguars. Here’s what you should know: 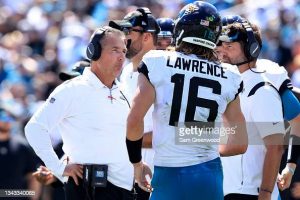 Before the beginning of the 2021 season, the Jacksonville Jaguars made a bold coaching hire in Urban Meyer. Meyer, who possesses the third-highest winning percentage among coaches in NCAA history, rolled into Duval County owning three national championship rings from his days with the University of Florida and Ohio State, and had garnered respect within the coaching community for his spread-based, power-running offensive approach.

The problem with Meyer, however, is twofold – he had never coached in the NFL prior to this season, so it was going to take time for him to get used to, as he has been fond of saying this season, “playing against Alabama every week”. Unlike college football where there are some pushovers, every team in the NFL possesses good players. Secondly, infamy seems to follow Meyer around, as he has dealt with numerous off-the-field scandals everywhere he’s been, and they’ve carried over to the pros – so much so to the point where there are rumors that he’s already lost credibility within the Jaguars’ locker room and that he might head back to the NCAA in 2022. It also didn’t help that Jacksonville has started the season by losing six of their first seven games.

On the field the Jags’ offense has been stuck in neutral. Trevor Lawrence, the rookie quarterback taken from Clemson with the first overall selection in April’s draft, was touted as the most pro-ready signal caller in years. While talented and intelligent enough to execute offensive coordinator Darrell Bevell’s schemes – which are a mix between Meyer’s preferred style of football and the West Coast offense Bevell has used in stops at Minnesota, Seattle and Detroit – Lawrence has been going through growing pains at the NFL level, as he has thrown for just eight touchdowns, completed 59.6 percent of his passes and tossed nine interceptions while losing three fumbles in seven games (Lawrence has cut down on the turnovers recently as he’s thrown just two picks in his last four outings).

It also doesn’t help that the Jags are bereft of talent and speed. Fellow rookie and former college teammate Travis Etienne was taken by Jacksonville to add some explosiveness to their backfield, but his dfoot surgery in August plus the loss of wide receiver D.J. Chark to a broken ankle has compromised Bevell’s offensive gameplans.

Etienne would have been a good “lightning” to running back James Robinson’s “thunder”. Robinson, whose game is based off a powerful running style (as is sbackup Carlos Hyde’s) is averaging 5.5 yards per carry, one of the best marks in the league (and is the biggest reason why Jacksonville is second in the NFL in that statistic). Robinson’s also eighth among all players in rushing yards.

The Jags have an offensive line that isn’t very athletic or powerful – save for the left side where guard Andrew Norwell and tackle Cam Robinson reside. The rest of this unit is composed of Tyler Shatley at center, Ben Bartch at right guard and Jawaan Taylor at right tackle. 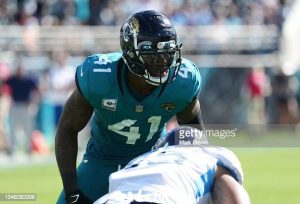 JACKSONVILLE, FLORIDA – OCTOBER 10: Josh Allen #41 of the Jacksonville Jaguars lines up against the Tennessee Titans at TIAA Bank Field on October 10, 2021 in Jacksonville, Florida. (Photo by Mark Brown/Getty Images)

Defensive coordinator Joe Cullen, a longtime defensive line coach with the Jags, Baltimore Ravens, Tampa Bay Buccaneers, Cleveland Browns and Detroit Lions, is finally getting a shot to run an NFL defense in 2021. Cullen, like colleague and longtime NFL assistant Bob Sutton, wants his system to primarily operate out of a base 3-4 and feature man coverage and matchup zones. It’s also notable for having exotic blitz packages with just one down lineman and other linemen and linebackers walking around until the opposition tipped its hand – and then those front seven players would decide who rushed from where (the system is similar to what Sutton learned from his former boss in New York, Rex Ryan).

Unfortunately for Cullen, this roster doesn’t have the manpower to run his schemes the way he wants at this time (the Jags have produced just two takeaways so far in 2021, the worst mark in the NFL). Former Seahawk Shaquill Griffin usually travels with the opposition’s best receivers but isn’t quite talented enough to do so on a consistent basis. His teammates on the back end include rookie Tyson Campbell, journeyman Nevin Lawson, slot corner Rudy Ford, rangy safety Rayshawn Jenkins and Andrew Wingard.

The Jaguars boast a speedy linebacker corps with some potential that includes Myles Jack, Josh Allen, K’Lavon Chiasson and Damien Wilson. Their defensive line leaves a lot to be desired, and is manned by veteran Malcom Brown, Davon Hamilton and Roy Robertson-Harris (former first round draft pick Taven Bryan has been relegated to third string duties). 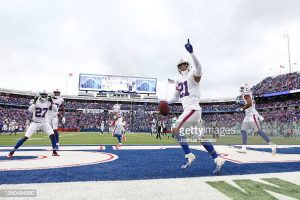 ORCHARD PARK, NEW YORK – OCTOBER 31: Jordan Poyer #21 of the Buffalo Bills celebrates after making an interception in the fourth quarter against the Miami Dolphins at Highmark Stadium on October 31, 2021 in Orchard Park, New York. (Photo by Joshua Bessex/Getty Images)

BUFFALO’S DEFENSE IS GOOD AGAIN – AND GOT REINFORCEMENTS

In 2021 the Bills decided to heavily invest in upgrading their pass rush. Rookies Gregory Rousseau and Carlos “Boogie” Basham, along with second-year defensive end A.J. Epenesa and free agent signing Efe Obada have injected a shot of youth behind the aging Hughes and Mario Addison, and defensive tackle Star Lotulelei is back to clog gaps against the run after opting out of 2020. These additions have assisted the team tremendously, as evidenced by Buffalo currently ranked first in pro football in points allowed, total yards allowed, passing yards surrendered and second in takeaways. They’re also fifth against the run and tied for ninth in sacks.

Schematically, the Bills’ defense mostly relies on basic zone coverages after the snap but before the snap it is complex – safety rotations to disguise their coverages keep opposing quarterbacks guessing, selective pressure looks at the line of scrimmage and coverage exchanges at the snap are Sean McDermott and Leslie Frazier’s calling cards (those blitz looks are usually in the A-gaps from their linebackers to confuse opposing offensive lines and quarterbacks). These blitz schemes plus their offseason acquisitions have allowed 16 different Bills to record a hit on a quarterback this year (third-best in pro football), 10 different players to notch a sack (second-most) and seven different defenders to intercept a pass (third).

The Bills’ defense is usually among the top units in the National Football League in usage of Cover Two, Four and Six, and are also in blitz rate. They mainly utilize nickel personnel, as evidenced by Buffalo using five defensive backs on 90.4 percent of their plays in 2020, the most in the league. 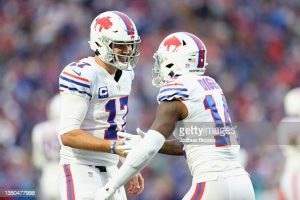 ORCHARD PARK, NEW YORK – OCTOBER 31: Josh Allen #17 and Stefon Diggs #14 of the Buffalo Bills celebrate after scoring a touchdown in the fourth quarter against the Miami Dolphins at Highmark Stadium on October 31, 2021 in Orchard Park, New York. (Photo by Joshua Bessex/Getty Images)

Allen – last season’s runner-up for the NFL’s Most Valuable Player – set Bills’ team records for completion percentage, completions, passer rating, passing yards and passing touchdowns in 2020. His improved processing skills, ball placement, patience within the pocket and touch on passes allowed Buffalo to become one of the most explosive attacks in pro football, and that success has continued into 2021 as the Bills have averaged nearly 33 points a game, the best mark in the NFL.

His core of targets is deep and extremely talented. Stefon Diggs is an exceptional route runner (much like the rest of his teammates), excels in making contested catches and operates well out of bunch and stack formations. His presence along with physical youngster Gabriel Davis has balanced out Buffalo’s wide receiver corps already boasting veteran Emmanuel Sanders and crafty slot receiver Cole Beasley. Third-year tight end Dawson Knox is also enjoying a breakout season with five touchdowns in his last five games but will miss a second straight with a broken hand.

Buffalo’s offense is a Patriots-style system built upon concepts involving option and crossing routes from the slot, downfield routes from the outside, designed quarterback runs to take advantage of Allen’s mobility, deep dropbacks and alignments that create favorable matchups (and some trick plays with jet/orbit motion and sweeps with Isaiah McKenzie). They also used more pre-snap motion and expanded upon their play-action and screen game greatly – mostly out of “11” personnel groupings (one back, one tight end and three wide receivers) and “10” personnel (one back, no tight ends, four receivers).

In fact, the Bills used multi-receiver sets so often that they lined up in “11” personnel on 71 percent of their offensive snaps and “10” personnel on 14 percent of their plays in the regular season. In 2020, they used four wide receivers or more 155 times – the second-most in the NFL – and they utilized someone in pre-snap motion 43 percent of the time, a huge increase from their 25 percent rate in 2019. Offensive coordinator Brian Daboll also called for a passing play on first down 64 percent of the time, according to ESPN Stats and Information – no team with a winning record in the last 20 years did it more often than Buffalo (so far that number is close to 60 percent in 2021).

The Bills’ offensive line isn’t made up of slouches either. Composed of Dion Dawkins, Mitch Morse, Daryl Williams, Jon Feliciano and rookie Spencer Brown (who will both miss Sunday’s contest with back and calf injuries), this unit can hold their own in pass protection and mainly execute outside zone runs almost exclusively to the left side of the line, along with zone read-options, pin-and-pull concepts, draw plays and split inside zone sprinkled in for running backs Devin Singletary and Zack Moss.

One area where the Bills have been surprisingly below average is in the red zone. Although they are among the NFL leaders in touchdowns scored and red zone possessions, once they do get inside the 20-yard line they only found paydirt 55 percent of the time going into their game with Miami last week – which was tied for 26th in pro football (they did convert three times on four red zone opportunities last week).

The book on slowing down the Bills’ offense – as evidenced last season in losses to Kansas City and Tennessee and in Weeks One and Six against Pittsburgh and the Titans – has been to rarely blitz, lean on zone coverage with a lot of stunts from defensive lines with mixed fronts and late movement in secondaries before the snap. This approach can hold Allen in check, will the Jaguars attempt a similar gameplan? 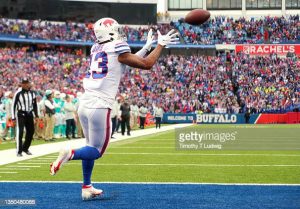 ORCHARD PARK, NEW YORK – OCTOBER 31: Gabriel Davis #13 of the Buffalo Bills makes a catch for a touchdown in the third quarter against the Miami Dolphins at Highmark Stadium on October 31, 2021 in Orchard Park, New York. (Photo by Timothy T Ludwig/Getty Images)