TONY’S TAKE – A PREVIEW OF SAINTS-BUCCANEERS 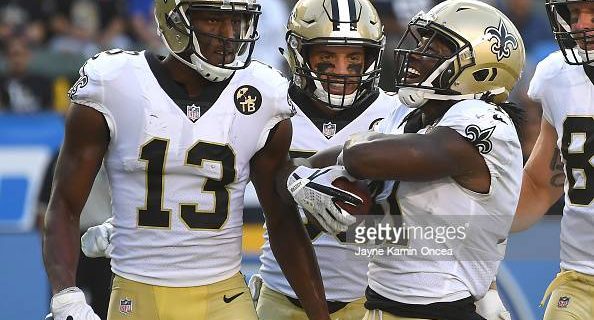 CARSON, CA - AUGUST 25: Austin Carr #80 and Michael Thomas #13 celebrate after a touchdown by Alvin Kamara #41 of the New Orleans Saints in the second quarter of the pre-season game against the Los Angeles Chargers at StubHub Center on August 25, 2018 in Carson, California. (Photo by Jayne Kamin-Oncea/Getty Images)

Welcome to the 2020 NFL season’s Divisional Round Weekend. Here at Buffalo Sports Page, we will attempt to inform and educate our readers about the upcoming playoff games and what each team might do to emerge victorious.

One of the NFC’s Divisional Round games will take place at the Superdome in New Orleans, Louisiana, as the New Orleans Saints will face the Tampa Bay Buccaneers. Here’s what you should know: 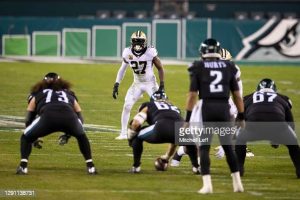 PHILADELPHIA, PA – DECEMBER 13: Malcolm Jenkins #27 of the New Orleans Saints in action against the Philadelphia Eagles at Lincoln Financial Field on December 13, 2020 in Philadelphia, Pennsylvania. (Photo by Mitchell Leff/Getty Images)

SAINTS’ DEFENSE HAS REBUILT INTO A LEAGUE-LEADING UNIT

Ever since their Super Bowl win in 2009 the Saints’ defense had been in a perpetual rebuilding mode. Save for one season in 2013, New Orleans ranked at or near the bottom in many categories virtually every season.

That is no longer the case. In 2019 the Saints’ defense began to ascend, finishing 11th overall, fourth against the run and third in the league in sacks. This year New Orleans took the next step by ending 2020 with 45 sacks (eighth-best in the NFL), 3,472 yards yielded through the air (fifth-best) and 1,502 yards given up on the ground (fourth-best).

Savvy veteran Cameron Jordan, on the rise gap-stuffer Sheldon Rankins, former Patriot Malcom Brown, third-year defensive end Marcus Davenport and breakout star Trey Hendrickson – who had a career-high 13.5 sacks – have all contributed to New Orleans’ upper-echelon pass rush and all anchor well against the run. Linebackers Demario Davis, Alex Anzalone and Zack Baun are tackling machines and can defend sideline-to-sideline with great speed (Anzalone is replacing Kwon Alexander, who is done for the year with a torn Achilles tendon).

Dennis Allen, the Saints’ defensive coordinator and former Raiders coach, has a very multiple defensive scheme. He uses a lot of personnel groupings and front-seven alignments, but nowhere is he more versatile than in his post-snap coverage rotations and usage of both man and zone. This fits perfectly with someone like cornerback Marshon Lattimore, who has become one of the NFL’s best shutdown defenders and can execute his many coverages. Malcolm Jenkins, Janoris Jenkins, Patrick Robinson, C.J. Gardner-Johnson, Ken Crawley, P.J. Williams and Marcus Williams make up the rest of their secondary. 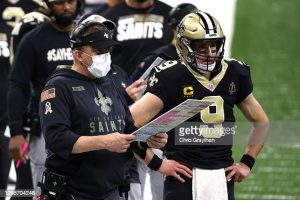 Drew Brees is still playing at an elite level, even in his 20th season and with declining arm strength. His footwork and pocket presence are impeccable, his accuracy is deadly (as evidenced by his holding the NFL record for completion percentage four different times), his experience gives him a leg up against most coverages and he is great at influencing pass defenders with his eyes, pump fakes and shoulder rolls.

For the most part the Saints’ passing game has been built through having big, physical targets who can get open over the middle of the field, especially on deep in, or “dig” routes. Head coach Sean Payton has employed such players before like Marques Colston and Jimmy Graham, and he has another such specimen in Michael Thomas. Thomas, the record-setting nephew of former NFL wide receiver Keyshawn Johnson, isn’t just athletically gifted but also possesses strong hands and the knowledge of how to find holes against certain coverages.

Trying to work the middle of the field helps Brees due to his lack of height, but Payton isn’t adverse against throwing the ball deep either. 11-year veteran Emmanuel Sanders is a crafty route runner, Tre’Quan Smith is a vertical threat and tight end Jared Cook is both a red zone target and New Orleans’ best mismatch-creating threat at the position since Graham roamed their sidelines six years ago.

The Saints like to line up in base personnel with a fullback and tight end split out wide with their top two wideouts in the slot to create mismatches against linebackers and safeties. New Orleans will also use post-wheel route combinations (or any type of vertical routes) to clear out zone defenders deep while Alvin Kamara picks apart linebackers underneath on option routes. Look for that to continue on Sunday.

New Orleans isn’t averse to running the ball though. The Saints love using Kamara on inside runs, misdirection plays, screens and draws, and lining him up at wide receiver – both out wide and in the slot. His speed, route-running ability and reliable hands make him a threat no matter where he aligns, and backup quarterback Taysom Hill is reminiscent of Kordell Stewart – athletic enough to make a play at any position.

The Saints’ offensive line is made up of the talented Terron Armstead, run-blocking extraordinaire Andrus Peat, maulers Erik McCoy and Cesar Ruiz and the ascending Ryan Ramczyk. They are one of the best units in football.

Another tactic the Saints are fond of is throwing out of run-heavy personnel. According to former MMQB/SI writer Andy Benoit, “No NFC coach uses formations with six offensive linemen more than Sean Payton, who loves to throw from that grouping. Also, its tight ends and running backs often help with chip blocks. This slows those players as they’re getting into their routes, but that’s fine because they can serve as check-down options, and Brees’s eyes don’t reach them until late in the play.” 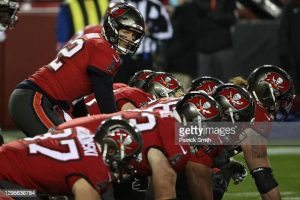 LANDOVER, MARYLAND – JANUARY 09: Quarterback Tom Brady #12 of the Tampa Bay Buccaneers looks on against the Washington Football Team at FedExField on January 9, 2021 in Landover, Maryland. (Photo by Patrick Smith/Getty Images)

Six-time Super Bowl champion Tom Brady has played in a bunch of different types of offenses in his career. From a power-running team featuring Antowain Smith and Corey Dillon in his early years, to a spread, pass-happy team with Randy Moss and Wes Welker, to an offense revolving around tight end Rob Gronkowski, Brady has seen and done it all with fantastic results.

For the better part of the last 20 years, the future first-ballot Hall of Famer was the triggerman for this attack with the New England Patriots. Until now. Brady, seeking a new chapter elsewhere, departed over the offseason to the Tampa Bay Buccaneers and has adjusted to head coach Bruce Arians’ downfield, vertical passing scheme quite well. Brady, even at age 43, has shown little signs of slowing down – accumulating 4,633 passing yards (the fifth-most of his 21-year career) and 40 touchdowns, the second-most he has had as a pro behind his 50 in 2007.

Helping Brady out is a plethora of dangerous options in the passing game. Before he signed in Tampa, wide receivers Mike Evans and Chris Godwin – a pair of fast and big-bodied red zone targets – were productive, but it seemed as if they had potential to do more damage in the NFL than they had with former signal caller Jameis Winston. Evans has responded with a career-high 13 touchdowns and Godwin was on pace to tie his career-bests in receptions and touchdowns despite playing in only 12 games.

Bolstering the depth of this high-flying offense beyond deep threat Scotty Miller and tight ends Cameron Brate and O.J. Howard (who was lost for the season with a torn Achilles’ tendon) were a pair of veteran imports – Gronkowski and Antonio Brown. Brown, the enigmatic former All-Pro, is still as dangerous of a route-runner as ever and posted 45 catches and four touchdowns in just eight games (a projected rate of 90 receptions and eight scores over a full season).

Gronkowski – one of the league’s best to ever play tight end – can do it all, including blocking at a high level, and can execute almost any route and catch any ball that Brady throws to him. The wear and tear of nine NFL seasons, plus a myriad of injuries, forced him to take a year off in 2019 after winning a third Super Bowl with the Patriots, but came out of retirement to team up with his former quarterback again. “Gronk” got off to a bit of a slow start in 2020 while trying to get reacclimated to pro football, but ended the season tied for second on the team in touchdowns.

The Bucs also boast many options at running back. Ronald Jones had a career-high 1,143 yards from scrimmage and is backed up by short-yardage specialist Leonard Fournette and former All-Pro LeSean McCoy. They run behind an underrated offensive line composed of Donovan Smith, Ali Marpet, Ryan Jensen, Aaron Stinnie and Tristan Wirfs, who had an impressive rookie year at right tackle.

Since Tampa Bay lost to New Orleans in Week Nine – the second time the teams faced one another, with the Saints emerging victorious twice – the Bucs’ offense has become more productive, with a notable uptick in usage of 12 personnel (one running back and two tight end packages) and more pre-snap motion. That has helped Tampa become more productive as of late, but will they continue to utilize it the third time around against New Orleans? 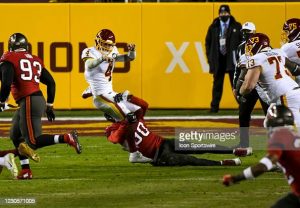 TAMPA DEFENSE IS AGGRESSIVE AND COMPLEX

Coordinator Todd Bowles – one of the NFL’s best defensive minds – runs a 3-4 scheme that is characterized by multiple fronts and blitzes, and uses plenty of stunts and slants at the line of scrimmage to apply pressure on opposing quarterbacks. On the back end, Bowles prefers man-press coverage to take away quick throws and disrupt timing between wideouts and pass distributors – a stark contrast to the old “Tampa Two” zone coverage that the Buccaneers leaned on for nearly 25 years.

Up front, Tampa Bay has an excellent front-seven. Veterans Ndamukong Suh, William Gholston, Rakeem Nunez-Roches and trade deadline pickup Steve McClendon – McClendon came over from the New York Jets in a trade after starting nose tackle Vita Vea was knocked out for 2020 with a broken ankle – are the team’s main defensive linemen. Shaq Barrett and Jason Pierre-Paul are a scary one-two punch at outside linebacker and have had much success as pocket disrupters throughout their careers, and inside linebackers Devin White and Lavonte David might be the fastest pair at their positions in pro football.

While the Bucs were the best defense in the league against the run and fourth in sacks, they were just 21st against the pass and could probably stand to add some talent in their secondary. Beyond promising safeties Antoine Winfield Jr. and Jordan Whitehead, their cornerbacks – Carlton Davis, Jamel Dean, Sean Murphy-Bunting and Ross Cockrell – leave a lot to be desired.