TONY’S TAKE – A PREVIEW OF TITANS-BENGALS 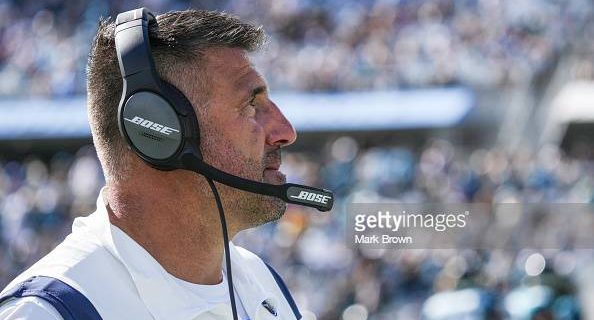 JACKSONVILLE, FLORIDA - OCTOBER 10: Head Coach Mike Vrabel of the Tennessee Titans coaching during the game against the Jacksonville Jaguars at TIAA Bank Field on October 10, 2021 in Jacksonville, Florida. (Photo by Mark Brown/Getty Images)

Welcome to the 2021 NFL season’s Divisional Round Weekend. Here at Buffalo Sports Page we will attempt to inform and educate our readers about the upcoming playoff games and what each team might do to emerge victorious.

One of the AFC’s divisional round games will take place at Nissan Stadium in Nashville, Tennessee as the Tennessee Titans will face the Cincinnati Bengals. Here’s what you should know: 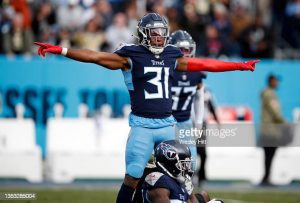 NASHVILLE, TENNESSEE – NOVEMBER 14: Kevin Byard #31 of the Tennessee Titans reacts after breaking up a pass against the New Orleans Saints in the third quarter against Nissan Stadium on November 14, 2021 in Nashville, Tennessee. (Photo by Wesley Hitt/Getty Images)

THERE IS A DECIDEDLY PATRIOT FLAVOR IN “SMASHVILLE”

Titans coach Mike Vrabel has taken bits and pieces from his former coaches as a player (Bill Belichick, Romeo Crennel, Dean Pees and Jim Haslett) and his current and former colleagues (Haslett, Pees and Crennel) to build his own sound defensive scheme. Vrabel’s a bit more blitz-intensive than the rest of the Belichick coaching tree but he also likes to rely on a four-man rush with twists and stunts from time to time.

With stalwarts like Denico Autry, Bud Dupree, Rashaan Evans, Harold Landry, Zach Cunningham and Jeffery Simmons at his disposal, Vrabel typically wants to turn his pass rushers loose and have defensive backs who can hold up in man and zone coverage long enough for his front-seven to get to quarterbacks. But after a downturn in their pass defense a year ago, Vrabel and company decided to revamp their secondary.

Out went guys like Malcolm Butler, Adoree’ Jackson, Desmond King and Kenny Vaccaro, and in came rookie Caleb Farley (injured with a torn ACL), gambling ballhawk Janoris Jenkins (who is susceptible to getting beat on double moves) the well-traveled Buster Skrine and internal options like Kristian Fulton and Amani Hooker. The linchpin of the Titans’ back end is the multi-faceted Kevin Byard, who can patrol centerfield as a single-high safety, drop down into the box to stop the run, cover tight ends and blitz.

The many changes on this side of the ball helped the Titans improve in many areas. They finished the 2020 regular season allowing the fourth-most passing yards in the NFL, accumulated just 19 sacks (the third-worst mark in the league), gave up a shade over 27 points a game and were just 19th against the run. 2021 was much better, as Tennessee was just three yards shy of being the NFL’s leader defending the run (second), 10th in interceptions, ninth in sacks and sixth in points allowed. However they were only 25th in passing yards given up.

The Titans utilize a lot of dime personnel and zone blitzes with cornerbacks rushing from the boundary, and they especially like to pair those blitzes with Cover Two principles and coverage rotations (with cornerbacks dropping to safety depth and safeties dropping down to replace corners underneath). Tennessee also loves using man coverage with a single high safety (Cover One) in the red zone – where they have struggled mightily the last two seasons. Will Vrabel change things up or will they remain true to themselves? 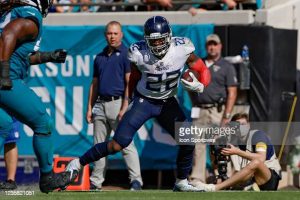 JACKSONVILLE, FL – OCTOBER 10: Tennessee Titans running back Derrick Henry (22) during the game between the Tennessee Titans and the Jacksonville Jaguars on October 10, 2021 at TIAA Bank Field in Jacksonville, Fl. (Photo by David Rosenblum/Icon Sportswire via Getty Images)

Prior to his time in the Music City, LaFleur was Sean McVay’s offensive coordinator for the Los Angeles Rams. McVay and LaFleur go back even further than that too, with both spending time working for Mike Shanahan in Washington and for his pupils – Gary Kubiak in Houston and Kyle Shanahan in Atlanta.

Like his former colleagues, Downing has used a playbook that emphasizes a running game built around zone-blocking (especially to the outside on “stretch” plays) and passes that are created off the threat of run-action. It’s a West Coast-style of offense that can create a lot of big plays down the field from craftily designed routes that work off one another, and the skill position players often line up in reduced splits to the line of scrimmage to become both extra blockers on runs and to have more room to run routes on the field.

Two years ago former Miami Dolphin Ryan Tannehill replaced the inconsistent Marcus Mariota as the Titans’ man under center and promptly responded with career-highs in completion percentage (70.3 percent), yards-per-attempt (9.6), touchdown-to-interception ratio (22 to six) and quarterback rating (117.5). After signing a contract extension Tannehill’s results were more of the same in 2020, completing 65.5 percent of his passes with 33 touchdown passes, seven interceptions and a passer rating of 106.5. Those numbers saw a dip in 2021, however, as Tannehill had a touchdown-to-interception ratio of just 21:14.

Tannehill has some good weapons to work with. Even though he lacks great quickness, running back Derrick Henry boasts an abundance of speed, power and strength in his game – allowing him to become just the eighth tailback ever to rush for 2,000 yards in a season last year. But after accumulating 937 yards in only eight games in 2021 (nearly on pace for last year’s total) Henry suffered a fractured foot, ending his regular season. His backups – D’Onta Foreman and Dontrell Hilliard – have been serviceable in his place and Henry may be able to return this weekend.

Third-year standout A.J. Brown and five-time All-Pro Julio Jones (acquired in a trade with Atlanta in the summer) give Tennessee perhaps the most physical one-two punch at wideout in pro football, and tight end has become a revolving door in recent years as the combination of Geoff Swaim and Anthony Firkser currently man the position once held by Delanie Walker and Jonnu Smith. Yet the Titans didn’t have much continuity among their pass catchers in 202 as Brown and Jones each dealt with various ailments and missed playing time.

Tennessee’s offensive line is made up of three-time Pro Bowler Taylor Lewan, former Ram Rodger Saffold, Ben Jones, Nate Davis and David Quessenberry. The group – and the offense as a whole – has come under fire a bit this year for their downturn in pass protection, as they gave up 47 sacks (the seventh-most in the NFL).

The Titans usually align in 12 personnel (one back, two tight ends) to give the opposition the threat of a run on every play, and one of their staple concepts out of that grouping is a play-action pass with a slant on the backside of the play (usually executed by Brown) and an option route being run on the other by Jones. Depending on the type of coverage he might see in front of him, Jones will execute either an out or a corner pattern. The read by Tannehill is an outside linebacker – if he reacts hard to the illusion of a run, Tannehill will throw to Brown, if not he’ll throw to Jones. Will we see this and their patented bunch formations more given the aggressive nature of Cincinnati’s defense? 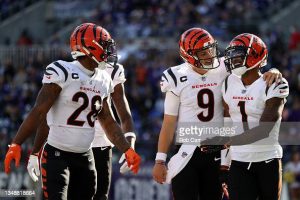 BALTIMORE, MARYLAND – OCTOBER 24: Joe Mixon #28 and Joe Burrow #9 celebrate with wide receiver Ja’Marr Chase #1 of the Cincinnati Bengals after Chase scored a second half touchdown against the Baltimore Ravens at M&T Bank Stadium on October 24, 2021 in Baltimore, Maryland. (Photo by Rob Carr/Getty Images)

BENGALS’ OFFENSE A BREAKOUT UNIT IN 2021

The Cincinnati Bengals’ head honcho is former Rams quarterbacks coach Zac Taylor. Taylor employs a version of his former boss Sean McVay’s offensive system, which relies on smaller, quicker linemen who can work in unison and push defenders horizontally on outside zone stretch plays, while leaving cutback lanes for running backs. Countless tailbacks have had success in it, and most of the runs are executed out of “11” personnel (one tight end, one back). The idea behind this is to spread defenses out and create more room to run against nickel and dime defenses.

Passing-wise, the Bengals are aligned with the West Coast offense’s principles. A ball-control passing game that can eat up clock while stretching teams horizontally rather than vertically, this version of the system features mobile quarterbacks who can move within the pocket, especially on bootlegs, rollouts and play-action. It also will have its skill players line up anywhere on the line of scrimmage to try and get defenses to declare their coverages, and aligns wide receivers close to the offensive line in order to give them more space to operate and to block on running plays. Their passing game makes excellent use of intertwining route combinations, especially ones involving posts, crossing patterns and flood concepts with pass options at the deep, short and intermediate levels.

At the helm of this attack is former first overall draft choice Joe Burrow. Burrow not only possesses a strong arm and high football I.Q., but also has a high sense of rhythm and timing for a young quarterback and is consistently accurate. He’s also aggressive attacking one on one matchups outside the numbers and has excellent movement within the pocket.

Those movement skills have come in handy within his first two seasons in the NFL as Burrow has operated behind one of the league’s worst offensive lines. Despite the left side of their line being serviceable (and held down by Jonah Williams and Quinton Spain), Trey Hopkins, Hakeem Andeniji and Isaiah Prince have not – thus putting Burrow under duress, taking a lot of sacks and sometimes anticipating pressure when there isn’t, which has led to hurried throws and interceptions.

While pass protection isn’t the Bengals’ strong suit, their run blocking isn’t all that bad, and Joe Mixon – one of pro football’s better running backs when healthy – took advantage by having the best season of his five-year career in 2021 with over 1,200 yards on the ground and 13 touchdowns. His solid vision and good cutback ability have meshed well with Taylor’s scheme.

Burrow also has plenty of weapons at his disposal in the passing game. Rookie Ja’Marr Chase, his former college teammate at LSU, finished the season with the second-most receiving yards and touchdowns ever by a first-year player and has done most of his damage as the boundary ‘X’ receiver on three-by-one trips formations and slant patterns on slant-flat combinations. Tee Higgins is a red zone target and excels on comeback routes and shifty slot receiver Tyler Boyd is a nifty option on short routes. C.J. Uzomah is the tight end. 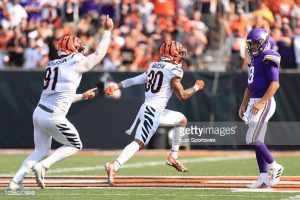 CINCINNATI, OH – SEPTEMBER 12: Cincinnati Bengals defensive end Trey Hendrickson (91) and free safety Jessie Bates (30) react after a turnover during the game against the Minnesota Vikings and the Cincinnati Bengals on September 12, 2021, at Paul Brown Stadium in Cincinnati, OH. (Photo by Ian Johnson/Icon Sportswire via Getty Images)

Cincinnati’s defense is mainly zone-based and coordinator Lou Anarumo is their play-caller. Although they do have some chess pieces to work with (as evidenced by being the fifth-best run defense in the NFL and tied for 11th in sacks) they don’t quite have enough talent on this side of the ball – resulting in being in the middle of the pack or near the bottom in many other categories.

Free agent pickup Trey Hendrickson, formerly of the New Orleans Saints, has lived up to his big contract with a career-high 14 sacks and his cohorts on the Bengals’ defensive line include Sam Hubbard, D.J. Reader and Larry Ogunjobi. Logan Wilson and Germaine Pratt are their starters at linebacker.

The Bengals have plenty of cornerbacks with experience in zone defenses like Eli Apple, Chidobe Awuzie, Trae Waynes, Tre Flowers and Vernon Hagreaves III, and slot corner Mike Hilton isn’t just one of the game’s best nickelbacks – he’s also an elite blitzer off the edge. At safety is the undersized and underrated Jessie Bates and Vonn Bell.