It’s important to be resourceful when your wife says she’ll be busy all Saturday with events – without you.

Sitting home and watching the Sabres play didn’t seem like the best alternative. I’ve done that a lot lately and, well, you know how that’s been going. But there are other sports entertainment options out there, and I filled my day with them.

Why don’t you come along?

ONE STEP AT A TIME 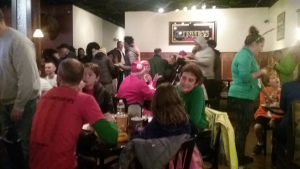 “Everyone was a winner when it came to the post-race party of the Holly Jolly 5K in Orchard Park Saturday.”

10 a.m. – The horn sounded, and about 200 friends and I were off through a supermarket parking lot for a 5-kilometer race through the streets of Orchard Park. It was the “Holly Jolly 5K.” I won’t bore you with the details. But I will say this: I didn’t win, and Orchard Park has some good-sized hills.

I finished in a reasonable time, had a pizza-and-water postrace refueling stop, and headed home for a quick shower. Next stop: The University at Buffalo’s Alumni Arena.

1:35 p.m. – The basketball game between the UB and St. Bonaventure was supposed to start at 2pm. I figured I was in good shape to make it, but then I saw something I hadn’t seen very often at a UB game – traffic. There was quite a line going down Millersport Highway from the North Entrance.

In the big picture, that was the biggest story of the afternoon. There were more than 6,000 fans in attendance. There have been a few bigger crowds at Alumni Arena, but not many. I parked the car (no charge, thank you) and took a good-sized walk – making it in time for the introduction of the starting lineups.

I’ve been around Western New York long enough to hear a great deal about college basketball in the “good old days.” That’s when the Little Three teams of St. Bonaventure, Canisius and Niagara used to play double-headers regularly before packed crowded. If the teams weren’t playing each other, they were taking on good teams from the East or other squads on their way to or coming back from the Mecca of college basketball at the time, Madison Square Garden of New York.

Those days died in the 1960s, and the explosion of college basketball – especially on TV – took a toll on the game locally. But on Saturday, the elements were there for a good crowd. These were two good teams, with both having a chance to qualify for the NCAA Tournament in March if things go well. Bona has plenty of alumni here, naturally, and it was rather warm and tranquil for December.

As an added bonus, they saw a good game. The purists in the audience were happy that Jaylen Adams returned to the Bonnies lineup after a preseason injury. The guard is one of the best players in the country, and you don’t get many of those with a home base of Western New York.

Adams was a little rusty, and UB pulled away just a bit to lead, 34-32, at halftime. Still, UB hung around. With 8:37 left, CJ Massinburg scored on a drive to cut the lead to 55-54. Anyone’s game. But that was the Bulls’ last field goal for the next eight minutes, and that would prove to be fatal.

“We played hard throughout the game,” Bona coach Mark Schmidt said. “We did a good job on the ball, and we had a good effort to keep the ball along the line.”

St. Bonaventure slowly pulled away down the stretch a 73-62 win. But a bigger winner was local college basketball. Maybe some of those 6,212 will come back for a game in the near future.

“It was terrific,” Schmidt said about the atmosphere. “We had a lot of Bona fans here. It was a great environment.”

“It was one of the better crowds since I’ve been here,” UB coach Nate Oats said. “We play a style worth watching, but we need to win games. Winning attracts fans. Hopefully we’ll come back from this.”

After a short stop at home, I headed to a fast-food restaurant for a chicken pot pie. No time to waste – I had one stop left.

7:35 p.m. – I had never seen a Canisius College hockey game … until Saturday night.

And this was one worth seeing, at least from the perspective of the quality of the opponent.

Clarkson came in ranked either third or fourth in the country, depending on the poll. That means the Golden Knights have a chance to go to the Frozen Four in the spring. That was a good enough reason to head to HarborCenter.

Canisius received some bad news before the game when top scorer Dylan McLaughlin was suspended for the game. Still, the Golden Griffins figured to be fired up for the chance to see how they played against the nation’s best.

Canisius held Clarkson off the scoreboard in the first period, but eventually the Golden Knights wore them down. Clarkson – which from the back has uniforms resembling the defunct Minnesota North Stars – scored three straight goals in the second period to break things open.

It wound up as a 5-1 win for the Knights. Still, first-year Canisius coach Trevor Large was happy to see how his team would do against a national powerhouse.

“Absolutely,” he said. “That’s why every team plays college hockey. You want to go up against the best. We get another chance to play them in a month or so at their place. It will be an environment similar to tonight. I thought the energy was great in the rink, when Buffalo’s college hockey team went up against one of the best teams in the country.”

A few other observations about my visit:

• Think the KeyBank Center is cold for Sabre games? Yes, it is. But HarborCenter isn’t far behind. Bring warm clothing.
• The building was rather close to full, in part because Clarkson travels quite well in terms of fan support. Still, most of the seats were filled, and the standing room area that rings the rink was crowded too. It figures to be one of the best crowds of the season.
• One advantage to a small building – the game seems to speed up. There is plenty of pace, and you are close enough to hear talking between players and almost feel the hits. There are only nine rows of seats, so no one is too far from the ice. It’s a different experience than the NHL, but a hockey fan should like it. And the prices are a bargain – $15 or $10, depending on the seat, and cheaper for kids.
• Canisius and Niagara play home-and-home next weekend, and they are the top two teams in Atlantic Hockey. Might be a good time to see them play.

All in a day’s work.