Doug Smith's memory can be an inspiration to the Niagara Power baseball team.

I’ve been thinking a lot this week about Doug Smith, the late Buffalo journalist who went by the nicknames of “The Cheap Gourmet,” “The Fun Ranger,” and “Base Paths” in his long career. Well, “Doug Smith” is a relatively common name, and writers like to stand out from the crowd.

Doug is mostly remembered for his work with the Courier-Express and WIVB-TV, although like most of us in the profession he contributed to any news outlet that would pay him. I remember him on a personal level as about the only person who ever wrote to me at The Buffalo News more than once to say how much he enjoyed a story I had written. Coming from an old pro like that, it meant a lot.

Therefore, I jumped on the computer recently when I heard that Doug’s son, Joseph W. Smith III, had put together an anthology of his father’s work. I ordered, received, and read a copy of it in near-record time, enjoying it thoroughly along the way. The book is filled with stories about traveling, food, entertainment, baseball and trains – so it’s fair to say that we had a lot in common. Doug and I first met as opposing pitchers at a softball game in the Media League around 1980, and stayed friends until he moved away about 35 years later. I didn’t encounter him often, but he always had a smile on his face when I did – which was hardly uncommon for him.

I thought while reading the book that some sort of gesture of salute was in order, and quickly figured out what to do. I had heard about the Perfect Game Collegiate Baseball League, a summer haven for players who are looking to sharpen their skills over the summer. Doug spent 10 years as the statistician, reporter, and public address announcer for the team, when it was part of the New York Collegiate Baseball League. The loop underwent some changes when the local professional group, the New York-Penn League, was killed off recently by Organized Baseball in a silly attempt to streamline the minors. So the PGCBL is the closest thing we have to the old Class A grouping. For example, the Batavia Muckdogs are now in the circuit instead of the NY-P league.

I grabbed another baseball-loving friend, who after a trip to Erie the week before had grown accustomed to my spur-of-the-moment travel ideas, and we drove to Niagara Falls. Actually, we drove to Niagara University first, because the website listed the team’s address as the ballpark there. It turned out that the College of Hospitality, Sport and Tourism Management at Niagara University is the owner of the team. The team president therefore is Bridget Niland, the dean of the school and a heck of a runner in the day. Students receive good, practical experience working on game operations for the team.

Happily, we eventually figured the game must be at Sal Maglie Stadium in Hyde Park – a short hop away. That was better anyway, since my last visit there was in 1991 when the Niagara Falls Rapids were playing. There were signs of baseball life in Hyde Park, thankfully. We paid $5 each for the best seats in the house, and saw the big sign on the press box saying that area was dedicated to Smith. Clearly we were in the right place.

Since it was a hot Saturday afternoon, our first task was to find shade. That’s not an easy task at “The Sal.” Luckily, the top row of seats behind home plate at 1 p.m. was covered by the shade of the press box – the only seats in the place that didn’t require sunscreen. Thanks for looking out for us, Doug.

Once we became comfortable in our comfy chairs (most of viewing locations have bleacher seating without backs), we took in the game and its atmosphere. What became obvious quite quickly is that this was a unique level of baseball. The players are all college level, of course, so it’s probably better than a high school all-star game. Several of the league’s players over the last decade or so have been drafted by major league teams, and it’s nice that the participants have a place to work on their skills during two months of games in June and July.

Still, there’s little extra money available beyond expenditures for bats, balls, uniforms, umpires, etc. Information about the league is more or less only available at the league website (pgcbl.com), so it’s difficult to figure out what’s going on without a little prep work.

Our knowledge of the teams upon arrival was limited to the names; the Elmira Pioneers are descendants of the Double-A teams I used to watch as a kid in the late Sixties. They also provided the opposition for the Rapids for the game I saw in 1991. The Pioneers came into the game at 20-19, while the Power was well down the standings in the West Division of the league at 14-25. The rosters are somewhat in flux, as some of the players have gone home already. So it’s a little tough to keep score.

The game description can wait; the atmosphere of the day can’t. It was an unusual afternoon at the ballpark, featuring a number of oddities that won’t happen on a typical baseball day at other levels of play.

* It was Military Appreciation Day at the ballpark, offering free admission to anyone who served in the armed forces. Nice thought – although it didn’t come up during the entire game itself, even during the National Anthem.

* All fans received a game program with their tickets. I did think it strange that the opening page, which featured an introduction to the league, was obviously left over from 2019. In fact, the included list of league teams did not include the Power. The publication also mentioned that a barber’s chair was located on the concourse as a tribute to Sal, who had the nickname of “The Barber” for his “close shaves” of batters. Never did find it.

* If you were wondering, we counted about 40 people at the game. That meant you had a good chance at a foul ball if you were willing to move around a bit. The Power offered to trade a candy bar at the concession stand for a foul ball; it’s tough to say how many people took advantage of that proposal. No dentists seemed to complain about it.

* There was a souvenir stand near the main gate. I noticed that there were a few t-shirts on sale, including one of the gone-but-not-forgotten Rapids. I’m not sure how the licensing rights work on that, but it’s a nice touch.

* Some of the plays were sponsored by local businesses with a plug on the public-address system. In other words, someone didn’t just hit a triple. They hit “a Western New York Strike Zone triple.” That’s a fun idea, but I did wonder how thrilled NU was to be mentioned for a “Niagara University foul ball.”

* Speaking (once again) of foul balls, early in the game a boy about seven years old got one in the area behind home plate. He walked over to a 4-year-old sitting near him, and offered him the ball. An older generation would describe that moment as precious; I would add the word “unprecedented.”

As for the game itself … the nicest thing I could say is that there was a great deal of activity taking place. One of baseball’s truisms is that the basics need to be handled adequately for the game itself to go smoothly. In this case, the Power started badly with a pair of walks and a wild pitch. That led to grooved pitches, and that led to runs. Elmira jumped out to a 5-0 lead, and the game was essentially headed toward an easy Pioneers’ victory. You gotta throw strikes.

Elmira didn’t let up during the course of the game. Nine of the team’s 10 batters scored runs (the league uses a designated hitter and an extra hitter). Meanwhile, stolen bases were plentiful. The Pioneers stole 12 bags, which almost drew a flag for unsportsmanlike behavior considering the one-sided nature of the game. Throw in a couple of wild pitches, a passed ball, and four hit batsman, and Elmira baserunners were constantly in motion. The Pioneers scored in all seven innings, a neat trick.

All of that running around the bases wasn’t enough to please someone on the Pioneers’ bench, who complained loudly about an umpire’s strike zone during a Niagara late-game at-bat. That was in spite of a 12-5 score at the time. The criticism earned a warning from the ump, who said plainly and loudly that he’d heard enough.

Elmira scored six times in the top of the seventh, and blanked Niagara in the bottom of the inning for an 18-6 lead. We then received our last lesson about the league – there’s a 10-run mercy rule. In other words, the game was over after three hours and nine minutes. That was plenty for us.

Doug wouldn’t have liked the game or its outcome, but he no doubt would have appreciated the fact that we went searching for a unique baseball experience … and succeeded in finding it. 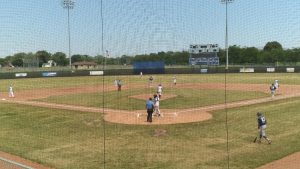 The view from behind home plate at Sal Maglie Stadium.