The seats behind home plate in Erie are close enough to call balls and strikes ... and to see balls headed to the outfield in a hurry, like this one.

I received most of my baseball education as a child watching games on the Double-A level. Elmira had a team in the Eastern League during the late 1960s, and Dad’s company had season tickets that were rarely used. So I got to take them … a lot.

I still have a fondness for the Eastern League. When my calendar opened up on Saturday night, it was clearly time for a drive to Erie for a game. Luckily, I have a friend that didn’t need much convincing to take such a trip, and he even drove. So we headed down Interstate 90 on a beautiful evening for baseball or anything else.

The first surprise came when we arrived in the area of the ballpark. It is located right on the edge between the residential and commercial areas of the city. UMPC Park obviously was squeezed into some land next to the Erie Insurance Arena (mostly used for junior hockey) next door – more on that in a moment. That means that parking is not in the usual place like a big lot in the vicinity. Yes, there is a parking area and a ramp nearby, but most people seemed to simply park on the street and walk a couple of block to the gates. That’s what we did, and it did give a small-town feeling to the start of the evening – in a good way.

We walked up to the box office and purchased two tickets five rows directly behind home plate for $18 each. That seemed more than acceptable; we could have saved $3 by buying in advance, but didn’t want to take a chance about not going. About the only disappointment to our entrance was that the team had a “Christmas in July” promotion taking place, and handed out winter hats to the first 1,000 through the door. Sadly, we had arrived too late for them.  At least a game program and lineup were free.

I do own a long-sleeve t-shirt of the Rumble Ponies, which is a tribute to the merry-go-round history of the Binghamton area. But who wants to support the visiting team in such circumstances? I decided instead to wear a hat of the Portland Sea Dogs, which plays in the Eastern League and has an adorable logo. Someone asked me if I was wearing a Sea Dogs cap, and I said yes. His reply was an enthusiastic “Awesome!”

The ballpark makes an immediate impression, because it’s broken into different sections. Obviously, the architects had to be creative in figuring out how to fill the assigned space in 1995. Down the first baseline, the six rows of box seats are immediately backed up by an upper deck, which is practically sitting on top of the field. They were voted as some of the best seats in minor league baseball, and I believe it. Concessions are tucked under the overhang at ground level. Way down the line is a party deck, with good-sized tables that offer a good view of the field.

The third-base side is more traditional, with the upper seating simply a matter of climbing steps in a tradition manner. Suites are located at the top of the stairs. Down the left-field line are some more concession areas, as well as some children’s play spots. The souvenir store is located near the main gate, so you can pick up your SeaWolves/SnowWolves merchandise at any point.

And then there’s the wall. It’s in left field, just like the one in Fenway Park. This one is 36 feet high, one short of the one in Boston. A line was painted around the advertisements this spring, and a batted ball has to be above it to be called a home run. Apparently, the old border gave up dingers a little too easily. Above the line, there are windows from the Erie Insurance Arena; let’s hope they are unbreakable to guard against an unscheduled appearance by Aaron Judge.

The park has received some upgrades in the last two years, and it all seems to work pretty well. The field is in good shape, it’s a clean facility, and there’s a respectable video board.  An announced crowd of 3,798 turned out for the contest.

Santa Claus, who had been strolling the aisles before the game, threw out the first ball, and the game was underway. It didn’t take long to recognize a kindred spirit to a Bisons’ legend – the SnowWolves’ bat boy probably wore the same uniform size as Buffalo’s legendary Butcher. Too bad the days of catching balls that roll off the screen behind home plate are over.

After a quiet top of the first, the SnowWolves wasted little time to make an opening statement. They went walk, double, fly out, fielder’s choice, triple, single, stolen base, single, stole base and error. That was all for starter Jose Chacin; there’s nothing like five earned runs in two-thirds of an inning to balloon a season’s ERA to 7.60. Two more hits followed to make the score 6-0 before the inning mercifully ended.

The calm before the storm

The Rumble Ponies did little rumbling in the next few innings, and the SnowWolves added three more runs to make it a 9-0 game in the bottom of the fifth. Erie stranded a couple of runners in that inning, but no one thought it would make a difference.

A 9-0 baseball game tends to bring out everyone’s conversational abilities, in the broadcast booth or among the spectators. We started chatting about sports and the media with a young couple near us, as the man wanted to break into the business. They were full of questions, and it was fun talking to them. One of them had bought a “Mystery Ball” before the game and found that it was autographed by Riley Greene, a former SeaWolf who is considered to be one of the top prospects in minor league baseball. Maybe that ball will be worth a lot someday.

We also came across another man nearby who had a couple of direct connections to me. When he heard I worked for The Buffalo News, he asked if I knew Mike Beebe. “I replaced him as the running columnist at the newspaper,” I replied, and the gentleman apparently had run with him once upon a time. Then that same person put on a sweatshirt from Ripley High School, and I mentioned that a good friend of mine at Syracuse University, Pete Ridout, was from Ripley. Pete had died in 1987 out West after a long illness at the age of 32. My new friend said he was in the same class as Pete’s sister, and knew him a bit. It was nice to find a connection to Pete, all these years later. Still miss you, buddy.

While these conversations were going on, the game continued. The Ponies scratched out a run in the sixth. In the seventh, Brett Baty – the Mets’ No. 2 prospect – launched a ball over the 36-foot line for a three-run homer, and suddenly it was 9-4. Baty finished the day 2 for 2 with three walks, three runs, and three RBIs. Binghamton added another run in the eighth to cut things to 9-5. Still, there seemed little reason for worry.

But after a leadoff fly out, the Rumble Ponies scratched out a walk and two singles to plate a run. That made the score 9-6 with two on, so the tying run was at the plate – and everyone in the park took notice. Nick Meyer popped out to the pitcher, but Zach Ashford singled home another run. A home run would have given Binghamton the lead, but Yaya Chentouf struck out Cody Bohanek to send the crowd home happy. Wenceel Perez had three hits and three RBIs to lead the SnowWolves, while Bubba Derby (sounds like a horse race at Arkansas Downs) was the winning pitcher.

A bonus was that it all took less than three hours, thanks to the pitch clock. Therefore, we were in back in the Buffalo area at a reasonable hour. All in all, it was an enjoyable baseball road trip even trip … even without the winter hat. 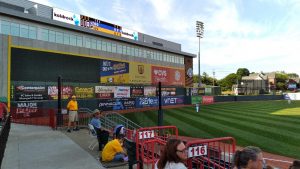 The left-field fence in Erie’s UPMC Park doubles as a wall for the city’s hockey arena.