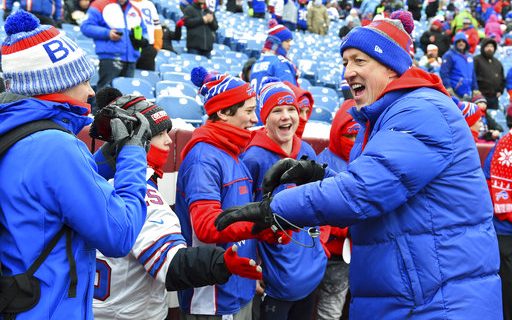 NFL Hall of Fame member and former Buffalo Bills quarterback Jim Kelly greets fans on the field prior to an NFL football game between the Buffalo Bills and the Miami Dolphins Sunday, December 17, 2017, in Orchard Park, N.Y. (AP Photo/Rich Barnes)

I’ve waited a week to write about the return of cancer for our QB. While others were quick to scribe columns on Jim Kelly’s toughness and offer words of hope, I needed more time. I know that sounds selfish, and it’s even more awkward to write. But when I first heard the news, it was a kick to the gut.

More Pain For The Kelly’s

The Kelly’s are as tough and strong of a family as you’ll find. The strength Jim and Jill displayed during son Hunter’s life, and the legacy they carry on in his memory is most admirable. They’re mission through Hunter’s Hope Foundation has saved numerous young lives through early diagnosis. They fought for testing, state by state, and still do.

I imagine the mission helps dull the pain of losing a child. They say there is no greater pain than that, and as a parent, I understand. Growing up, we had family friends that lost their son to cancer at the age of 10. His name was Bobby, and he passed before I was old enough to have known him. But I knew all about him, and the pain his mother and father lived with everyday. I could see it in their eyes when they spoke of him.

When I heard about Kelly’s cancer returning for a third time, I thought, how much pain is enough for him and his family? The physical pain is one thing, and we all flippantly believe that Jim can handle it. Easy to say, we don’t have to endure it. The emotional pain is a whole other animal. The fear has to be real, just as it was the first two times. Jill has to be worn out by now, and his girls crushed. They have witnessed the hard moments, the real ones. Anyone who’s been through a cancer fight or has been beside someone fighting knows those moments. Filled with fear, hope, and fear.

Facing It With Faith

The Kelly’s are a family of strong faith, and safe to say, so is this town. They will draw on that to fight this battle one more time. They will also draw on the support from the community, and our faith in Jim to beat cancer again.

I recall writing during his first bout of cancer, that we can’t lose Jim Kelly because the city needed him. He represented greatness and hope. He still does. He’s an inspiration to so many who are battling cancer, or have kids battling tough odds. Despite the losses in the big game, Kelly reminds us of what it is like to be a winner. We have faith in him, and that’s why we believe he will beat cancer again.

It won’t be easy. I’m not a doctor, but my guess is this will be even tougher than the previous bouts. Cancer knows who it’s fighting, which makes you wonder why it is even bothering again. But it is.

Jim will need our support, and that means all of us. Buffalo, Bills Mafia, members of his church, the NFL, passersby, you name it. Send his family a tweet of support, say an extra prayer, and when you see him, give him a hug. He’ll accept it all.

I’m sure there are those out there that think others fighting the fight need the support as much or more. They’re right. People battling cancer need the same amount of support, and this is where Kelly leads again. By beating cancer, Jim will inspire other patients to fight as hard as they can. It’s in his nature. I believe that’s why he shared his personal news once again. It’s not to be selfish, or for pity. He wants everyone to join the team, support him, and help him to victory so he can help others.

You can help them too. I hope that the thoughts and prayers we are all giving the Kelly family extends to others that are going through a tough time. Surely, we all know someone who is battling illness, loss, or hard times. Reach out and let them know you care. Do it often, and take nothing for granted. In fact, reach out at least once a month over the next year. That’s 12 months in honor of #12. Call it the Kelly plan.

There is no playbook for this, but you’ll know what to do. Be thankful for the opportunity. It’s your chance to lead, to inspire, to care. Those are the things that make Jim Kelly great, and make us lucky to have him.