The Buffalo Bills went into the 2021 NFL Draft with two goals – to upgrade the talent on their roster and to not be forced to draft for need. In a sense, they accomplished both goals.

Many of the players the Bills drafted were among the highest-rated at their positions and they also added to some positions that were seemingly overcrowded (defensive line in particular). But some were taken to fill holes anyways – like their first two draft choices, Gregory Rousseau and Carlos Basham. And many of the players were selected from colleges that the Bills rarely procure talent from.

Although none of us know how it will pan out until a few years down the road, it seems as if the Bills came away with one of the better draft classes in the National Football League. To paraphrase former ESPN broadcaster Chris Berman, allow us at Buffalo Sports Page to be the last to recap the events of this past offseason. Here’s a comprehensive roundup of Buffalo’s haul from the draft:

Knowing that the Bills’ pass rush had been lacking for several years and that current defensive ends Jerry Hughes and Mario Addison are on the wrong side of age 30, general manager Brandon Beane decided to get younger in the trenches by selecting defensive end Gregory Rousseau from the University of Miami.

Listed at 6’6”, weighing 266 pounds and boasting hands that measured 11 1/8”, arms that are 34.5 inches long and a wingspan of 83 inches, Rousseau is a big man. In his lone season as a starter for the Hurricanes in 2019, he used that size to his advantage by leading the ACC in sacks with 15.5 and racking up 54 tackles (19.5 for a loss) and seven quarterback hurries. That sack total was second in the nation to reigning NFL Defensive Rookie of the Year Chase Young of Washington, and his production earned him first-team All-ACC honors and second-team All-America honors.

Rousseau’s game is based off using his athletic gifts – size, speed, quickness and power – to his advantage and can beat blockers with pull and rip moves. He’s also excellent on stunts and twists where he can attack less athletic guard and centers, but sometimes he’ll lose leverage at the snap and attack blockers too high. Luckily, those technique issues can be corrected by good coaching at the NFL level.

Having taken Rousseau one round earlier, conventional wisdom would have seen the Bills address another position of need in the second round. Instead, Buffalo made defensive end Carlos “Boogie” Basham the first Bill drafted from the Wake Forest Demon Deacons since defensive back Eric King in 2005.

Beane wisely followed the draft board that the rest of his front office had spent the better part of a calendar year compiling and selected a player whom some had projected as a late first round pick. Basham’s value was too good to pass up, as the first team All-ACC selection from 2019 is seen by many as a defensive lineman who – like Rousseau – wins at the line of scrimmage with leverage, technique and effort, and can kick inside and be a three or five-technique defensive tackle in subpackages. Basham also possesses good hand usage in run defense and can develop into an excellent bull rusher with good coaching.

“I like his versatility and he’s definitely ready,” Beane said of Basham. “Really good player, good instincts. Sometimes when guys go from the edge to the inside, we call it sticking your face in the fan. There’s a lot of noise in there, a lot of banging around. It’s not for everybody. You have some pure edge rushers who just don’t like to get in there and mix it up. He is a dense guy. He can rock guys back. He can win with speed or power. Power is probably his number one tool.” 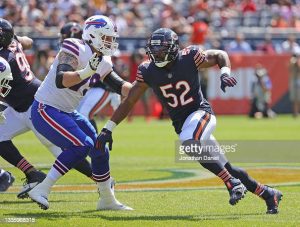 CHICAGO, ILLINOIS – AUGUST 21: Khalil Mack #52 of the Chicago Bears rushes against Spencer Brown #79 of the Buffalo Bills during a preseason game at Soldier Field on August 21, 2021 in Chicago, Illinois. The Bills defeated the Bears 41-15. (Photo by Jonathan Daniel/Getty Images)

Brown, who is the first athlete ever drafted by Buffalo from Northern Iowa, Spencer Brown appeared in 33 games with 32 starts for the Panthers in his career – mainly at right tackle. Brown earned preseason FCS All-American and second team Missouri Valley Conference honors in 2020 and 2019, respectively.

At 6’8” and 311 pounds, Brown has an edge to his game with athleticism and is very good on vertical pass sets – meaning setting up to pass block someone on a play that calls for a deep shot down the field. Which is perfect for a team like Buffalo which tries to take advantage of quarterback Josh Allen’s tremendous arm strength. He could become a future starter at right tackle.

Tommy Doyle, like Brown, was a starter for most of his time with the Miami (OH) Redhawks and has good size (he’s 6’8”and weighs 326 pounds) but didn’t start receiving accolades until his junior year of 2019. Only the second Bill ever drafted from Miami of Ohio (tight end Bob Jencks being the other in 1963), Doyle was named first team All-MAC in both 2019 and ’20, and was also an Academic All-Mac selection in 2019.

Having started 10 games at right tackle in 2018 and 16 games at left tackle in 2019 and ’20, Doyle offers positional versatility and toughness, and was also a part of a very accomplished Redhawks unit (the only area of his game that needs work are his athleticism and technique, but that can be coached up). Miami allowed an average of just two sacks per game in ’19 and gave up just 20 sacks in the entire ’18 season. Additionally, the Redhawks rushed for nearly 160 yards a game. 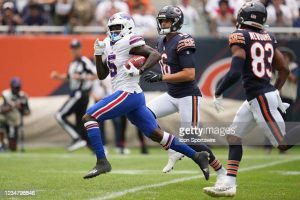 CHICAGO, IL – AUGUST 21: Buffalo Bills wide receiver Marquez Stevenson (5) runs the football back for a touchdown during a preseason game between the Chicago Bears and the Buffalo Bills on August 21, 2021 at Soldier Field in Chicago, IL. (Photo by Robin Alam/Icon Sportswire via Getty Images)

Knowing how deep Buffalo is at wide receiver with the likes of Stefon Diggs, Emmanuel Sanders, Cole Beasley and Gabriel Davis on their depth chart, it was a bit surprising to see general manager Brandon Beane take another wide receiver. Then again there’s value in Marquez Stevenson’s game that Beane just couldn’t pass up, especially in the return game – where he will be competing with Isaiah McKenzie for kickoff and punt duties.

A two-time American Athletic All-Conference first team selection, Stevenson was known in college for being somewhat small at just 5’10” and having some injury concerns (battling knee, collarbone and ankle ailments) but when healthy has shown off electric speed. That speed, plus his ability to track deep balls and his willingness to go over the middle, allows him to create yards after the catch and makes him a threat in the return game. Should he learn how to beat man-press coverage and become a more adept route runner, Stevenson could become even more dangerous. He reminds some of former Bill John Brown and could potentially be the heir apparent to current slot wideout Cole Beasley. 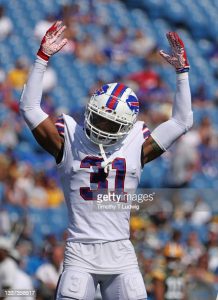 Hamlin, a safety, is a willing hitter – so much so that he accounted for 275 tackles in 46 career games with the Pitt Panthers (an average of nearly six tackles a game) and finishing either first or second on the team in takedowns in each of the last three years. He also cataloged six interceptions, a fumble recovery and 21 defended passes.

In defensive coordinator Leslie Frazier’s zone-heavy scheme, Buffalo asks their defensive backs to be physical not just in pass coverage, but against the run as well. Hamlin appears to be a perfect fit in that regard. Honors given to Hamlin included an All-ACC second team nomination in 2020 and an Honorable Mention All-ACC selection in 2018. 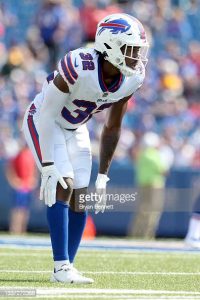 Given how often Wisconsin prospects are lauded as “pro ready” by some scouts, no Badger had been selected by Buffalo since former wide receiver Lee Evans in 2004. Until now. Wildgoose, a 5’10” cornerback, notched 57 tackles, 14 defended passes and three fumble recoveries in 24 games during his time in Madison.

Wildgoose may have recorded just one interception in his career – against Michigan State two years ago – but beyond recording turnovers, the Bills need their cornerbacks to be sound tacklers. Wildgoose was groomed well by Badgers coach (and former Bills safety) Jim Leonard to do just that, and he could also be valuable in kickoff and punt coverage. 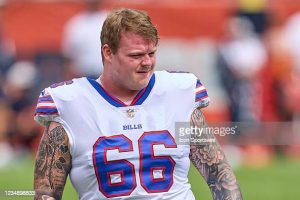 CHICAGO, IL – AUGUST 21: Buffalo Bills offensive guard Jack Anderson (66) looks on during a preseason game between the Chicago Bears and the Buffalo Bills on August 21, 2021 at Soldier Field in Chicago, IL. (Photo by Robin Alam/Icon Sportswire via Getty Images)

The first Bill to be taken from Texas Tech since Sammy Morris in 2000, Anderson was a consistent starter for much of his time with the Red Raiders – minus his junior season in 2019 which was mostly wiped out due to injury. A selection for this past January’s Senior Bowl, Anderson started every game at right guard in three of the past four years – including his freshman year in 2017 – and received a slew of honors along the way such as ESPN and USA Today Freshman All American in 2017, Associated Press second team All-Big 12 in 2018, first team Academic All-Big 12 in 2019 and first team All-Big 12 last year.

Anderson was seen by some talent evaluators as a fine pass blocker and possessing some power as a run blocker as well. What holds him back is his lack of mobility and some stiffness to his game – thus leading to some talk of him potentially moving to center somewhere down the line.