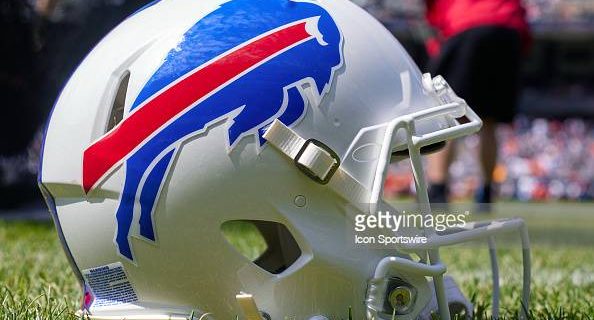 Since the earliest portion of the spring, the Buffalo Bills have acquired multiple players from other teams who they believe will upgrade their own talent level.

To paraphrase former ESPN broadcaster Chris Berman, allow us at Buffalo Sports Page to be the last to recap the events of this past offseason. Here’s a comprehensive roundup of Buffalo’s haul from the spring: 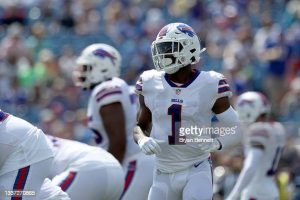 ORCHARD PARK, NEW YORK – AUGUST 28: Emmanuel Sanders #1 of the Buffalo Bills runs on the field during the first quarter against the Green Bay Packers at Highmark Stadium on August 28, 2021 in Orchard Park, New York. (Photo by Bryan Bennett/Getty Images)

With the release of vertical threat John Brown due to salary cap concerns, Buffalo found themselves needing a temporary replacement at wide receiver who could play with Stefon Diggs, Cole Beasley and Isaiah McKenzie while youngsters like Gabriel Davis, Marquez Stevenson and Isaiah Hodgins could develop at a slower pace. That arrived in the form of 12-year veteran Emmanuel Sanders.

The signing of Sanders – a two-time Pro Bowler who has played in three Super Bowls for three different teams (Pittsburgh, Denver and San Francisco) – to a one-year deal helps the Bills in numerous ways. He’s a nuanced route runner who – while not quite as fast as Brown was – excels on short, intermediate and long routes and is also more versatile than Brown. While Brown was strictly a wideout who could burn opponents deep outside the numbers, Sanders could also perform in the slot if need be. His savvy and experience in big games should be of use to a team like Buffalo that has Super Bowl aspirations.

Sanders had been on general manager Brandon Beane’s radar for a number of years before he finally signed him. In 2019, Beane targeted Sanders as a potential option to acquire from the Broncos at the trade deadline, but he was sent to the 49ers instead. Sanders was also Beane’s fallback option to sign in case the trade for Stefon Diggs fell through, but he ended up signing with the New Orleans Saints. 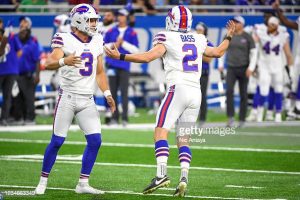 DETROIT, MICHIGAN – AUGUST 13: Matt Haack #3 of the Buffalo Bills and Tyler Bass #2 of the Buffalo Bills celebrate after a field goal against the Detroit Lions during the fourth quarter of a preseason game at Ford Field on August 13, 2021 in Detroit, Michigan. (Photo by Nic Antaya/Getty Images)

After deciding to walk away from former punter Corey Bojorquez the Bills decided to sign a replacement in former Miami Dolphin Matt Haack, signing him to a three-year deal that they hope can stabilize the kicking positions along with Tyler Bass for years to come.

Some may have looked at Bojorquez’s ability to pull off long kicks (he led the NFL in gross yards per-punt average with 50.8) and wondered why Buffalo would let him walk. With the Bills possessing an elite offense, they don’t need a punter who can flip the field – they just needed someone who was better at directional and placement punting, which Haack provides. 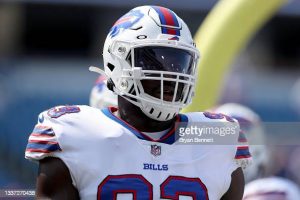 ORCHARD PARK, NEW YORK – AUGUST 28: Efe Obada #93 of the Buffalo Bills warms up prior to a game against the Green Bay Packers at Highmark Stadium on August 28, 2021 in Orchard Park, New York. (Photo by Bryan Bennett/Getty Images)

Hoping to boost the production and depth of their pass rush, the Bills inked ex-Carolina Panther Efe Obada to a one-year deal. Obada, who spent 2017-20 with Carolina as part of the International Player Pathway Program, also bounced around between the Dallas Cowboys, Kansas City Chiefs and Atlanta Falcons earlier in his career.

The 29-year-old native of Nigeria recorded 5.5 sacks last year (which would have paced Buffalo in that category) and at 6’6”, weighing 265 pounds and possessing an 83-inch wingspan boats good athleticism and length. He can line up as an edge rusher and kick inside as a three-technique defensive tackle in pass rush situations. 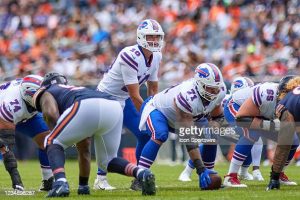 CHICAGO, IL – AUGUST 21: Buffalo Bills quarterback Mitchell Trubisky (10) gets ready to take the snap from offensive tackle Ryan Bates (71) during a preseason game between the Chicago Bears and the Buffalo Bills on August 21, 2021 at Soldier Field in Chicago, IL. (Photo by Robin Alam/Icon Sportswire via Getty Images)

Following the departure of former backup quarterback Matt Barkley, the Bills knew they were going to need a new – and more talented – insurance policy should anything happen to starter Josh Allen. Enter Mitchell Trubisky, the former second-overall selection in the 2017 NFL draft by the Chicago Bears.

Trubisky, who signed a one-year contract, will look to rehabilitate his game in Buffalo after expectations for his career in the Windy City largely went south. Despite a Pro Bowl selection in 2018 and helping lead the Bears to the playoffs twice in his four years in Chicago, his attributes – namely his athleticism and his better-than-average arm strength – couldn’t make up for his inconsistent accuracy and inability to make full-field reads.

However, Trubisky can perform decently well when placed in a system that asks him to make half-field reads and uses his legs to his advantage – such as one that utilizes play-action, bootlegs and rollouts often. 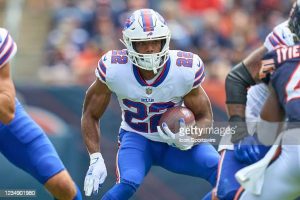 CHICAGO, IL – AUGUST 21: Buffalo Bills running back Matt Breida (22) runs with the football during a preseason game between the Chicago Bears and the Buffalo Bills on August 21, 2021 at Soldier Field in Chicago, IL. (Photo by Robin Alam/Icon Sportswire via Getty Images)

Breida, the former Dolphin and San Francisco 49er, signed a one-year deal with Buffalo to form a triple-headed monster in the Bills’ backfield.

In the last two years, offensive coordinator Brian Daboll was able to take advantage of Devin Singletary’s quickness and Zack Moss and Frank Gore’s power. The only element that was missing was speed – which Breida provides in spades. 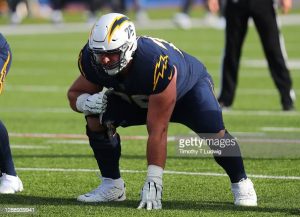 Lamp was brought in by Buffalo to provide some veteran depth along their interior line but was placed on injured reserve while training camp was going on. He previously spent the last four years with the L.A. Chargers after being selected in the second round of the 2017 NFL draft out of Western Kentucky.

While a Charger, Lamp started 18 out of 25 games – including all 16 last season. 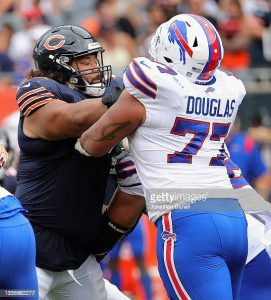 CHICAGO, ILLINOIS – AUGUST 21: LaCale London #63 of the Chicago Bears rushes against Jamil Douglas #77 of the Buffalo Bills during a preseason game at Soldier Field on August 21, 2021 in Chicago, Illinois. The Bills defeated the Bears 41-15. (Photo by Jonathan Daniel/Getty Images)

Like Lamp, Douglas landed with the Bills via free agency on a one-year contract to compete for a roster spot and to improve the quality of depth at guard. Having been drafted by the Dolphins in the fourth round in 2015, Douglas has also been on the rosters of the Falcons, New England Patriots and Indianapolis Colts during his seven-year career.

Douglas was re-signed to Buffalo’s practice squad after not making the team’s initial roster out of training camp. 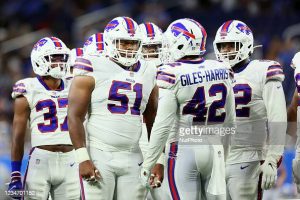 Buffalo Bills offensive lineman Tyler Gauthier (51) talks with linebacker Joe Giles-Harris (42) on the field after a play during the second half of an NFL preseason football game between the Detroit Lions and the Buffalo Bills in Detroit, Michigan USA, on Friday, August 13, 2021. (Photo by Amy Lemus/NurPhoto via Getty Images)

Initially entering the NFL as an undrafted free agent out of Duke in 2019, Giles-Harris was signed in May from the Jacksonville Jaguars to help on special teams and to be a capable replacement should any of the Bills’ linebackers suffered an injury.

Like Douglas, however, Giles-Harris didn’t survive the team’s cutdown to a 53-man roster. He was brought back as a member of Buffalo’s practice squad. 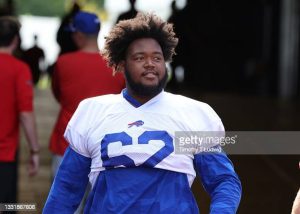 A former seventh-round pick by the Raiders in 2017 out of Toledo, Hester has bounced around a bit in his five-year career. The defensive tackle has also spent time with Washington and Philadelphia, totaling 36 tackles and two sacks.

Hester was placed on injured reserve during training camp.