Bailey: A Day and Night To Remember For USA Hockey 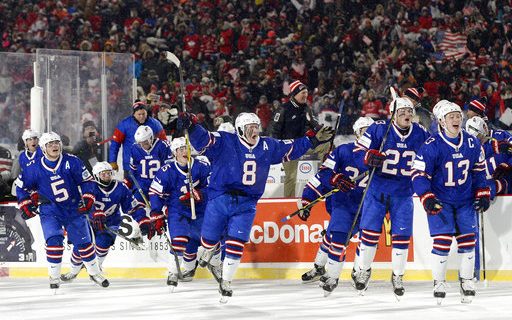 That essentially was the biggest question coming out of Friday’s outdoor hockey game in New Era Field – the first in the history of the World Junior Hockey Championships.

For the record, the United States beat Canada in a shootout, 4-3, in the preliminary round of the tournament. But the game was overshadowed by the Event, with a capital E. It swallowed up the players, coaches, and the 44,492 who were on the grounds of the stadium in Orchard Park.

“I’ll never forget this game for the rest of my life,” Kieffer Bellows of Team USA said.

“I’m so happy to be a part of it,” Maxime Comtois of Team Canada said. “We were excited to be playing in it.”

The Americans received a hint before they even arrived at the game that this was not going to be typical afternoon. Their bus got stuck in an icy rut, and needed a push.

“The fans ended up pushing us out,” Ryan Poehling said. “There must have been 10 or 15 helping out.”

The teams eventually arrived under sunny skies. But in Western New York in this particular December, nothing goes as planned or hoped. Remember the Bills-Colts game? In this case, the skies turned cloudy shortly before the game, and it looked as if one of our notorious lake-effect snow bands was going to have an impact on play.

Meanwhile, the fans slowly filed through security – emphasis on slowly. Social media was filled with reports of long, long lines to enter the stadium. It seemed as if fans were arriving in their seats throughout the first two periods. But they kept coming.

The snow arrived right around the start of the game, and slowly picked up in intensity. The world’s fastest team sport around was changed by the conditions into something much more deliberate.

“We had to simplify things,” Poehling said. “We had to get pucks deep. No one could ice the puck.”

Canada did a better job of adjusting early in the game. The Canadians grabbed a 2-0 lead in the first 16 minutes on goals by Cale Makar and Dillon Dube. Team USA got one back in the second period on a score by Bellows, but Boris Katchouk answered 34 seconds later to restore the two-goal lead.

Considering that skating on the snow was almost like walking underwater, a comeback seemed almost far-fetched.

“We were all telling each other to trust the game plan,” Brady Tkachuk of the USA said. “We stayed positive.”

In the third period, Casey Mittelstadt – a former first-round pick of the Sabres and one of the best prospects in hockey – went to work. He had glittering assists on a pair of goals to tie the game. Scott Perunovich and Tkachuk got the goals, but Mittelstadt deserved more than a share of the credit. And just think – the Sabres didn’t have to throw a season away to acquire his rights.

“He’s an awesome player,” Tkachuk said. “When you’re out there with him, you expect him to make plays.”

With the rate of snow dropping as the game went past the three-hour mark (plenty of shoveling breaks), the action picked up. Neither side could score through snow-vertime in spite of some good chances, leaving fans on both sides – yes, Canada was predictably well represented – almost breathless. A break to resurface the ice before the shootout seemed to only heighten the drama.

Bellows and Tkachuk scored early in the best-of-five shootout, and goalie Jake Oettinger was perfect in stopping four attempts by Canada.

What was it like? It was an instant classic moment in Buffalo’s sports history.

“It was my first time – the first time a bunch of us – played in an outdoor game,” Tkachuk said. “Both teams cherished the experience.”