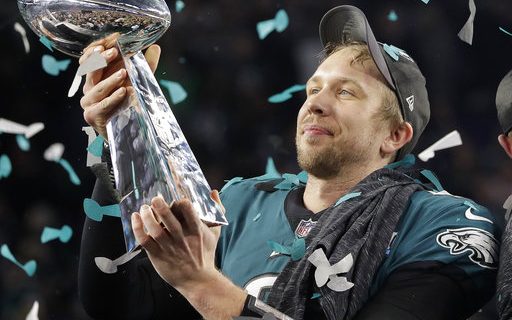 The Super Bowl lived up to its name on Sunday; it really was “super.” The Philadelphia Eagles win ranks as one of the most compelling games in National Football League history.

In fact, I could make a case that it was the most exciting NFL game ever. That’s because it checked every box for what goes into a great contest.

A great game has to mean something to both teams. That generally eliminates most non-playoff games. The added pressure of knowing that your season will end with a loss, or – better yet – that a championship will slip away with a defeat raises the stakes a few notches.

The Eagles and the Patriots did that, and then some. All right, their offenses did. Which brings us to …

Old-timers might remember the boxing match between Marvelous Marvin Hagler and Thomas Hearns more than 30 years ago, when the two men came out slugging from the opening bell. No one cared about blocking a punch; it was all about the knockout.

This was a rematch, football style, that lasted 15 rounds instead of three. Right from the beginning of the game, both offenses were in a great rhythm. You had the feeling that any play from scrimmage was capable of going for a long gain, or perhaps a touchdown. When does something like that ever happen in pro football? Never. The scores often were particularly acrobatic or athletic.

I never wanted to look away for a moment, because I was afraid of missing something.

I followed the conventional wisdom before the game, saying that it was tough to believe that Nick Foles could play well enough in a comparison with Tom Brady to get the Eagles over the finish line. That conventional wisdom was wrong, and so was I. Foles was magnificent throughout the game – better than he was against Minnesota, all things considered, and few thought he was capable of that.

He was so good that he gives the Eagles a fascinating dilemma going forward. How do you tell someone like Foles that he’s not good enough to start somewhere next season? Philadelphia has Carson Wentz, who was brilliant during the regular season, and is the Eagles quarterback of the future. He’s not going anywhere.

Can the Eagles afford to keep an asset like Foles on the bench, and does he want to be there? Part of the fun is that it’s always difficult to judge a backup quarterback. Is Foles another Steve Young, who was Joe Montana’s backup and made it to the Hall of Fame, or is he another Matt Cassel, who filled in for superbly for Brady for one season and then … oh, never mind.

That makes for a fascinating offseason for all concerned. But in the meantime, Foles won’t be allowed to buy an adult beverage within the city limits of Philadelphia for the rest of his life.

The Eagles had fourth-and-goal late in the second quarter, and were obviously thinking about going for it instead of kicking the easy field goal. And every Patriots-hater in Western New York could write the script from that point – New England stops them to change the momentum, gets the second-half kickoff, marches down the field for a score, and wins going away.

Except, the Eagles had other plans. They pulled out a play from deep, deep in the file. Backup tight end Trey Burton threw a touchdown pass to Foles.

Everyone instantly knew that it was a play that would be remembered forever. Foles became the first player in NFL history to throw and catch a touchdown pass in the same game.

The NFL has had trouble determining when a player catches a football this season. Sometimes a cloudy rule can come back to bite you at the worst possible time – see “no goal,” Sabres vs. Stars, 1999. But on two touchdown plays where there was a little uncertainty, the NFL got it right and called them catches.

Between that and the relatively lack of penalties, there were few “what ifs?” involving third parties. That’s always helpful.

Let’s shift analogies from boxing to college basketball. Every year at the NCAA tournament, there are a few games in which the ball is headed toward the basket at the buzzer. If it goes in, the team advances (or at least prolongs its situation). If it stays out, the team’s season is over.

This Super Bowl had that. The Patriots weren’t done until the “Hail Mary” pass bounced around above the end zone before falling to the turf. Yes, New England still would have needed to get a two-point conversion to get to overtime had it scored a touchdown there, but this was more than good enough in a dramatic sense.

THE END OF A DROUGHT

Let’s face it – neutral fans of the game (as opposed to those of a specific team only) enjoy it when a team finally gets to lift a championship trophy after a long wait. Ask people who watched the Cubs finally end their long drought.

The Eagles hadn’t won an NFL championship since 1960. That qualifies. Good for them, and their fans.

What more could a game provide? Nothing.