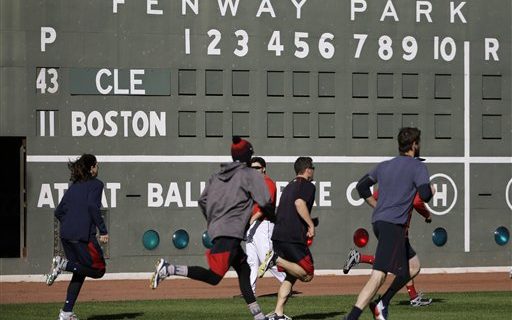 Baseball scoreboards like the one on the Green Monster at Fenway Park in Boston would have to change if a radical plan to reduce innings ever happened. (AP Photo/Elise Amendola)

It’s time to think out of the box for a bit, if you will pardon that well-worn phrase.

The current issue of “Mensa Bulletin” magazine has a cover story called “Radical Sports Rules Reform.” It’s written by Roger Knights (his pen name is Arc), and it offers some ideas for changing baseball, football and basketball.

They range from the interesting to the bizarre. Would you watch a basketball game with four baskets (two at each end) instead of two? It’s offered as a way to open up the game and reward athletic ability and quickness. I’m a little skeptical on that one. How about different colored penalty flags in football, so that fans know instantly what team will be potentially penalized when a play is over? That would remove about 10 seconds of uncertainty in some cases, although we usually can guess a call by the location of the flag.

In baseball, Arc suggests calling any batter out who takes steps toward a pitching with the idea of starting a confrontation and/or a possible fight. It’s supposed to reduce such incidents, although I would think batters would just wait until a play is over, and then charge the mound. Besides, there isn’t an epidemic of fighting in baseball.

The most interesting idea in the article, though, centers on the structure of the game itself. Instead of having nine innings with three outs per side, Arc advocates seven innings with four outs per side. That means each team would get 28 outs instead of the current 27 (not counting extra innings).

Plenty of suggestions have come up to improve the pace of baseball lately. I’ve never heard of this anywhere else. Let’s think about it.

You would have a few more breaks between half-innings under that plan. That would mean 10 minutes of dead time would be eliminated from the game. In compensation, the amount of actual playing time would be a little longer. Teams would get an extra out, which means batters would have an extra chance to extend innings. That should lead to more scoring, as offenses wouldn’t have to start from scratch so often.

It also, Arc argues, would extend the more interesting strategic moments of a game. Right now, the game changes with two outs. Sacrifice flies and bunts aren’t used in such situations. Defenses are aligned differently. With an extra out, for example, infields would have to be pulled in more often.

Pitching would have to be handled differently. Some relief pitchers are used for one inning right now. They might have to get used to throwing a few more pitches to get four outs instead of three, although that would seem to be an easy transition. If that’s the case, managers wouldn’t burn through the bullpens so quickly. Meanwhile, the standards for qualifying for wins probably would need to drop from five innings (15 outs) to four (16 outs).

What would a baseball game structured like this look like? A software program could be designed to recreate thousands of games to do a compare/contrast project, but that’s a lot of work. I’ll try something much less ambitious. I grabbed my baseball scorebook (keeping score at games has become a little nerdy, but I still like to do it), and looked at a couple of Bisons games. I went through the contests batter by batter, lining up the results in four-out innings instead of three.

On July 15, 2017, Scranton/Wilkes-Barre beat Buffalo, 2-1, in nine innings. In a seven-inning game, the Bisons earned an extra run and sent matters into extra innings with the score tied at 2-2. S/WB left two runners on base in either format, while the Bisons actually had one fewer runner on base. Naturally, I could only record 27 of the 28 outs needed when converting the results into the different scheme.

How about an extra inning game? Toledo came to town on May 17, 2015, and it took 12 innings to determine a winner. The Mud Hens scored three in the 12th to take the 5-2 win. In a four-out game, the Bisons won way back in the eighth inning. Ryan Schimpf hit a walk-off single with three outs to earn the 3-2 victory. In the real game, Toledo left 11 runners on base to Buffalo’s 9. In the fake game, the Mud Hens left 9 while the Bisons stranded 8.

In other words, they became slightly different games, but not radically different.

Practical considerations prevent the 4-by-7 approach from even being tried on the professional level. That’s 10 minutes or so of commercial time that would disappear from games, and the television outlets wouldn’t like that at all. Remember, baseball doesn’t have a halftime or intermission like its counterparts like football, basketball and hockey. The plan would make television rights less attractive to those networks and their advertisers, which would mean less money for the teams and the sport. That’s not going to fly.

There’s also something beautifully symmetrical about the current set-up. It’s three strikes and you’re out, three outs and your side is done, nine batters with at least three at-bats each. The romantic in me would hate to lose that.

If television wasn’t an issue, the 4-by-7 plan might make for a slightly more entertaining game. I could see it tried by leagues – perhaps independent pros or summer college leagues – to see how it might work. Games played by those under 18 years of age usually aren’t more than seven innings, and the length of games isn’t as much of a concern.

Personally in the area of speeding up games, I’m a little more concerned with batters stepping out of the box constantly, and extra-inning games that ruin pitching staffs for days once they get past 12 innings.  But I’m all for looking for ways to make our games better. Original ideas like Arc’s get the wheels in our heads turning, and that can only help.