Not many professional goalies have won a championship wearing “Buffalo” on a hockey sweater.

Nick Vitucci is one of them.

He was the netminder for the Buffalo Stampede when it captured the Roller Hockey International championship in 1994. Hockey has been a vehicle for Vitucci to see the country – mostly on long bus rides – and that summer in Buffalo always will be one of his best sports memories.

“It was awesome,” he said about the championship season.

Vitucci grew up in Welland, Ontario, where hockey in Buffalo was a big part of his life.

“I’ve still got my the ticket stub from when the Buffalo Sabres beat the Minnesota North Stars on March 12, 1977 – my first NHL game,” he said with perfect memory. “I spent a lot of time in Memorial Auditorium. I played summer hockey at Holiday Twin Rinks. The first hockey school I ever went to, just before I started playing goal, was the ‘Larry Mickey Hockey School.’ I followed Buffalo hockey as a kid, and I continue to follow it.’

OFF TO THE PROS

Vitucci played a couple of years as a junior in the Ontario Hockey League, and found work as a pro in the East Coast Hockey League in 1988 even though he wasn’t drafted. The goalie bounced from Winston-Salem to Greensboro to Hampton Roads in the ECHL (with American Hockey League stops in Maine and Hershey tucked in) before arriving in Toledo in 1993. Vitucci even earned an invitation to the Sabres’ training camp of 1991, where he found himself behind Daren Puppa, Clint Malarchuk, Steve Weeks, Tom Draper and David Littman. Not much room to advance there.

Vitucci joined a championship team in Toledo, which had won the crown under coach Chris McSorley – the brother of NHL player Marty – in the spring of 1993. The Toledo Storm won the title again in 1994, with Vitucci playing a key role. At that time, Roller Hockey International was expanding from 12 to 24 teams, as league president Dennis Murphy – who had helped bring us the American Basketball Association, the World Hockey Association, and World Team Tennis –hoped to capitalize on the inline skating boom. Buffalo was awarded a franchise. The league was something of a summer work program for ECHL players. 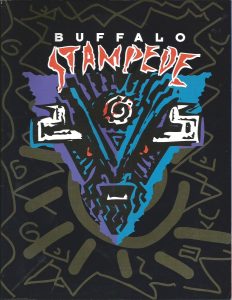 “We had John Hendry, Rick Corriveau, Jay Neal, Dave Lemay and myself from Welland. We all played in Toledo,” Vitucci said. “Chris McSorley kind of took us into roller hockey.”

McSorley doubled as the coach of the new Buffalo Stampede. Vitucci spent the summer in Welland and carpooled to games, which was ideal. Learning to play the sport while on wheels was less than ideal.

“I remember saying to Chris in the first day of practice, ‘There’s no way I can do this,’” Vitucci said. “I’d been on roller blades on the street but never in hockey equipment. I was trying to move from side to side, and that was impossible. He laughed at me, but he had no experience coaching roller hockey. He knew we’d figure it out.”

Vitucci did exactly that … eventually.

“At 5-8, I couldn’t challenge the angles because I didn’t cover a lot of the net,” he said. “On the ice, I relied on lateral movement. But in roller hockey, lateral movement was more or less gone. I was jumping and skipping across the crease.”

Then there was the matter of equipment. It was an entirely different situation than ice hockey.

“When I was in the Sabres’ training camp, the guy who repaired the goalies’ equipment was at the Cinderella Shoe Shop out of Niagara Falls, New York,” Vitucci remembered. “After two weeks, I found that shoe shop” which is still open on Hyde Park Blvd.

“I said, ‘You’ve got to help me make some goalie pads.’ They didn’t need to be as heavy as ice hockey pads, because there weren’t hard pucks coming at you. The leather would stick to the floor. When you were down, you’d get stuck on the floor. You couldn’t move.”

Vitucci ended up with some nylon pads, with plastic sewn on the inside and outside. That way, it had an ice-hockey feel.

“You had to experiment with the wheels, to find out what worked for you,” the netminder said. “The roller wheels were high for goalies. I ended up finding a pair of skateboarding wheels and putting those on. There was a lot of trial and error, but those were the skates and pads I used for the next few years.”

HELP FROM A STRANGE PLACE 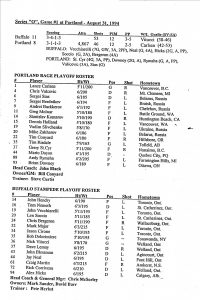 The Welland Boys were joined on the roster by a variety of other players. One in particular arrived in an unusual way.

“John Blessman and I played junior hockey together, and then played minor hockey together,” Vitucci said. “John was basically in a prison camp that summer. Chris McSorley said he was looking for a player with a specific style. I said, ‘How about Bless?’ He said, “He’d be perfect. Where is he?’ I said, ‘Well…,’ and told him the story.”

Vitucci soon was off on a recruiting trip.

“I actually went on a visiting day,” he said. “Bless was getting out after our season started. I told him the story and asked if he wanted to play. He said, ‘Absolutely.’ I had to bring him a pair of running shoes the next day, which wasn’t a visiting day. It was right out of ‘Cool Hand Luke’ – the security guard with the sunglasses and the rifle. He said, ‘Leave those behind that tree!’ I said, “OK, see ya.” John ended joining us and was a major part of that club. I stay in touch with John.”

The members of the Stampede figured out how to play roller hockey, which had a slightly altered set of rules. Each team had four skaters and a goalie during play. Power plays were 90 seconds, and the four periods lasted 12 minutes each. Buffalo had a good team that year, going 15-3-4. That was Vitucci’s record as well, as he played all but 16 of the team’s minutes in goal. John Vecchiarelli led the way with 32 goals and 33 assists in 65 games. Len Soccio had 20 goals, and Bergeron, Alex Hicks and Jason Cirone added 19 each. 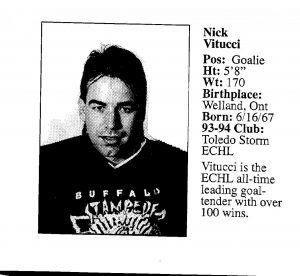 The Stampede knocked off the New Jersey Rockin Rollers, Montreal Roadrunners, and Minnesota Arctic Blast to reach the playoff finals against the Portland Rage. After a road win by Buffalo in the best-of-three series, the teams played in Memorial Auditorium in Game Two. People still remember the crowd of 14,175, although it’s uncertain how many people actually paid to get in and how many received free tickets. Either way, they saw a heck of a game. The Stampede trailed, 6-1, in the second quarter but rallied to win, 8-7. Hendry scored the winner with 1:27 left, and Vitucci picked up the win.

“That was a lot of fun,” said the then-Stampede goalie about the championship season. “It gave minor-league players a chance to be like major-league players. We flew to games. We played in a lot of NHL arenas. Some games were on ESPN. A gentleman gave me a DVD that he had of the game, so that brought back a lot of memories.”

McSorley moved on after that season, and the Stampede was unable to repeat in 1995. That edition of the team is best remembered for its coach – Rob Ray, who went behind the bench for home games. The franchise moved to the Albany area a year later. Roller hockey returned to Buffalo when the Wings were formed in 1997, and they hung around for a few years before the entire league collapsed for good around 2000.

THE ROAD GOES ON AND ON

As for Vitucci, he played in the ECHL for Toledo, Charlotte and Greenville – the latter was memorably nicknamed the Grrrowl – through 2001. The netminder still has a sliver of fame on ice, as he’s the only pro goalie ever to get credit for a goal when an opposing goalie was in the crease. In 1996, goalie Alain Morrisette grabbed a clearing pass from Vitucci, and accidentally swept the puck into his own net. Eventually Vitucci landed in coaching, working in Toledo in five different seasons. He was inducted into the first class of the ECHL’s Hall of Fame in 2008.

Now Vitucci is a scout for the New Jersey Devils. There are no more bus rides for this hockey lifer – only a drive from Welland. Vitucci is a frequent presence at Sabre games these days.

“I was always hoping to get into scouting,” he said. “It’s something I enjoy doing. I was fortunate that the Devils offered me a position last year. I absolutely love it.

“I look forward to games here. (Sabres general manager) Jason Botterill is going to turn things around with the Sabres. He’s a smart hockey man. Everyone has to be patient again, unfortunately. But he’s a good man:”

As for the Stampede, the alumni popped up in hockey conversations around Buffalo for a while. Vitucci kept up with some of his teammates over the years.

“Some guys went on to good careers,” he said. “Alex Hicks played in the National Hockey League. Craig Martin played in the NHL. Mark Major had a good minor pro career. Vecchiarelli had one as well. Chris Bergeron is the head coach at Bowling Green. All the time I spent in Toledo coaching, we would catch up with each other

“Next year is the 25th anniversary of that team. We’ll have to have a get-together, a reunion. That would be a lot of fun.”