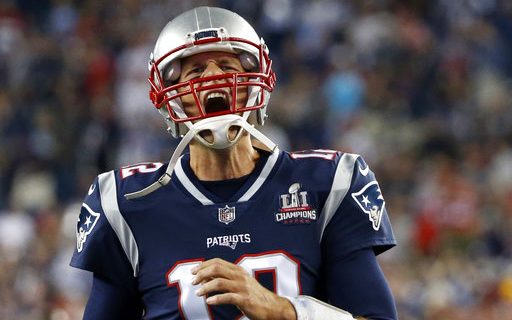 Tom Brady is the best QB the Bills will face in 2019. The rest of them, not nearly as good. (AP Photo)

When looking at the Bills schedule this year it occurs to me that it is much easier than last year’s schedule in two key areas. Those areas are the quarterbacks they face and the run defenses. This year maybe a much better year for the Bills on the field, because the schedule makers have shined a positive eye on them.

Looking at the Bills schedule from 2018 it is amazing that the team won six games. The first nine games were against six playoff teams and two teams (Tennessee and Minnesota) that were eliminated on the last day of the season.

The easy game in the first nine was in Green Bay against Aaron Rodgers. This was the game that ironically started the feud in the media between Mike McCarthy and Rodgers. Since it was early the Packers weren’t the disaster they would prove to be later in the season. The Bills faced Phillip Rivers, Andrew Luck and Deshaun Watson as well in those first nine games.
Taking a look at this years schedule the task isn’t nearly as daunting. Look at their first six games. The quarterbacks are Sam Darnold, Eli Manning, Andy Dalton, Tom Brady, Marcus Mariota and Josh Rosen. Brady of course is Brady and the New England games will always be two losses on the schedule, but look at everyone else.

In terms of QBR rating from last year Darnold was 28th, Manning 25th, Dalton 15th, Mariota 19th and Rosen 33rd. The Bills are expected to again have a very good defense and other than Brady none of those QB’s scare me that much.

The next stretch is pretty good as well. From Weeks 8-14 the Bills face Carson Wentz 12th, Case Keenum 29th, Baker Mayfield 23rd, Rosen, Joe Flacco 18th, Dak Prescott 17th and Lamar Jackson 31st. In this stretch the two QB’s that scare me are Wentz and Mayfield with his new weapons. Still for the first 13 games of the season to only have three QB’s that are very good is not a bad schedule in terms of the quarterbacks you face.

The Bills finish up with Ben Roethlisberger, Brady and Darnold. The Steelers could be this year’s version of the Packers. I could see getting them later in the season is much better than facing them early.

Still the average QBR for the season based on last year’s numbers is 20 this year. That’s much better than last year.

I do admit that some QB’s may get better. The Bills hope that Josh Allen gets better than his average QBR of 24 last year. Still basing the schedule on the quarterbacks you face is favorable.

Again looking at this year’s schedule it’s not as daunting. Not only should the Bills running game be better because of a new offensive line and a better overall group of running backs but the schedule is easier as well. The start of the schedule is the easiest. The Jets 26th, Giants, 20th, Bengals 29th, New England 11th, Titans 18th and Dolphins 31st. That’s only one team in the top half of the league. The average run defense the Bills will face this year is 21st.
The toughest stretch will be later in the season when the Bills face Dallas 5th, Baltimore 4th, Steelers 6th and New England 11th.

The Bills need to start off hot running the ball because in the first 11 games they only face two teams that were in the top half of the league in run defense.

I do realize that just like with quarterbacks teams can change over the course of a year and last year’s numbers could change this year.

Fans always seem to complain about the schedule. The Bills got snubbed because they didn’t have any prime time games. That maybe so but I prefer to look at the schedule in a different way. Based on the combination of quarterbacks they face and run defenses this year there is no excuse for the Bills this year. Facing QB’s with an average QBR of 20 and run defenses with an average of 21! This is as good of a schedule as any Bills fan could hope for. There is no reason why the Bills shouldn’t be in the hunt for a playoff spot the year based on what I believe is a very favorable schedule.