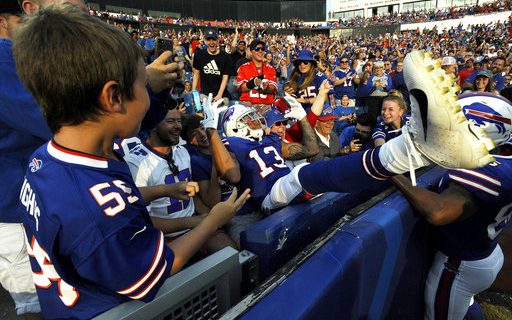 Buffalo Bills wide receiver Kelvin Benjamin, center, dives into the first row of the stands after catching a touchdown pass from quarterback Nathan Peterman during the first half of an NFL football game against the Carolina Panthers, Thursday, Aug. 9, 2018, in Orchard Park, N.Y. (AP Photo/Adrian Kraus)

It was a fun and watchable first preseason game for the Bills, as they lost to the Carolina Panthers 28-23.  The game was well-played, competitive and started to provide some answers to the team’s biggest questions.

All three quarterbacks played well.  The offense gave us a glimpse of how it’s going to be QB-friendly.  Kelvin Benjamin, finally healthy, looks like a true #1 receiver.

*Nathan Peterman getting the start probably has more to do with him being the only QB who’s returning from last year.  I wouldn’t read too much into that.

*I would read into the fact that Peterman looked calm, cool and under control.  He threw the ball well, and threw the ball to the right people.  The toss to Benjamin while rolling out, hitting Kelvin who was diving, was a great decision and execution.

*The TD toss to Benjamin was a perfectly thrown ball.  That was part of Peterman’s nearly perfect night, going 9/10 for 119 yards and a TD.

*Peterman threw one interception, but I will not blame him for it.  It was thrown to Chris Ivory’s back shoulder, a tough catch but one that the veteran should have made.

*I didn’t really notice Tremaine Edmunds, which is too bad because I really wanted to see how he looked.  He was credited with only 1 tackle, and I don’t even remember that.

*Jerry Hughes had a few nice pass rushes.  Shaq Lawson did too, along with a deflected pass.  Good signs for a Bills defense that needs both of them off the edge.

*A.J. McCarron played the second quarter, and also looked good.  He displayed some veteran poise in the pocket, and showed off a better arm than I expected.  He stepped up in the pocket well.  His rollout throw to Reilly was the nicest throw of any QB in the game.

*For Peterman and McCarron to combine for 16/20 for 235 yards is a good Rount 1 of the QB competition.  I was worried that neither guy took control in training camp.  Maybe both are just gamers.  The competition got a lot more interesting because both played well.  I’m not sure I expected that.

*The Brian Daboll offense is very QB friendly.  Lots of easy throws like screens.  That’s the way offenses are played now, especially in college but even more now in the NFL.  With a mostly untested QB room, I love that Daboll is going to make it as easy as possible for his guys to gain confidence and move the team.

*Marcus Murphy looked quick.  I think he keeps himself in the battle for the #3 RB.

*Alright, let’s get to Allen.  I loved that Daboll let him air it out on the first play.  I understand that the place went nuts.  Maybe the most-cheered incomplete pass in Buffalo history. But I refuse to get excited about it.  We all know Allen’s got an arm.  But it was not well thrown.  It was thrown out of bounds.  Just because he can throw it 60 yards doesn’t have any indication that he’s a good QB.  The fact that he threw it out of bounds is a red flag for me.  Let’s not get too worked up over deep throws.  Tyrod Taylor did that well too.

*Overall, I thought Allen handled himself well in his debut.  He made a few nice, strong throws.  He was poised in the pocket, not nervous.  He made good reads.  The arm strength, on the shorter throws, jumped out at you.

*The Kelvin Benjamin/Cam Newton pregame dust-up was awesome.  Clearly Cam was angry about what Benjamin said about him this week.  The body language between the two was so clear.  That is not a friendship that will be continuing.