Bills Play The Worst Teams In The NFL 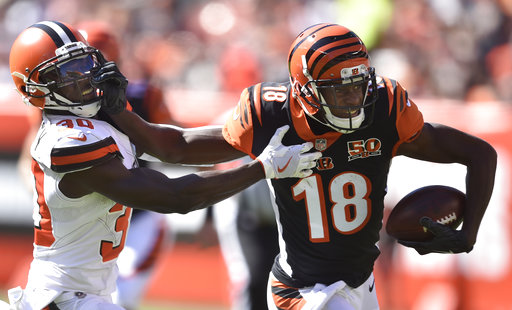 Despite a top flight receiver like A.J. Green (18), the Cincinnati Bengals may be one of the NFL's worst teams. They are on the Bills schedule. (AP Photo/David Richard)

After I did this it came to me that the Buffalo Bills play all of these teams this year. Here are who I think are the fours worst teams in football.

This one is easy. It has appeared that they are trying to tank this year. Seems like it’s been “Tank for Tua” since the season has started. You know it’s bad when you have Ryan Fitzpatrick and Josh Rosen as your quarterbacks. They lost their best receiver, best offensive lineman and two best pass rushers in the off-season. They honestly have the worst pass rush in football coming into this year. You have a new coaching staff coming in. when you look at every power ranking for the Dolphins are ranked 32. I’m not saying this is a bad move in the long term. The Dolphins have stocked up for the 2020 draft. But this year is going to be extremely difficult for the fish.

Ask any Giants fan what they think of Dave Gettleman. He might be the most hated man in New York. And that’s saying something with James Dolan is in your town. That will happen when the fan base believes that you gave away Odell Beckham Jr for little or nothing. Gettleman also traded Olivier Vernon, his best pass rusher, to the Browns. People are saying if the Browns are good, Gettleman should be their employee of the year.

The quarterback position is a mess. Eli Manning has been done for a couple of years now. Manning is 8-23 as a starter since 2017. Controversy was made in the draft when the Giants drafted Daniel Jones with their first pick. I don’t think Jones has an NFL arm. I do believe he will start the majority of games for the G-men this year and it will be ugly on the job training.

Marvin Lewis is finally out in Cincinnati. I think this year will be a down year for the Bengals. The Bengals tabbed Zac Taylor as their new coach. Taylor is the youngest coach in the NFL coming from the Sean McVay tree. I believe Taylor is coming into a rough spot. The offensive line for the Bengals is bad. How bad is it? The Bengals are counting on Cordy Glenn and John Miller to help out. Along with a bad offensive line the Bengals real problem is on defense. The Bengals had the worst defense in football last year. They ranked 32 out of 32. Their pass defense was really bad. Their first two picks were offensive players in the draft.

I can’t see this team winning many games with what I believe again will be the horrible defense. The Bengals are in a tough division. I can see them going 0-6 in the division against the Steelers, Browns and Ravens.

From top to bottom I believe this might be the worst roster in football. Again like all of the teams on this list quarterback is a question. The Redskins might go with Dwayne Haskins as quarterback. That might be a good move for the future but I think they will struggle this year. One problem Haskins will have is I believe he has the worst receivers in football to throw to. The Redskins spent foolish money in free agency as Dan Snyder usually does. He way over-paid for Landon Collins to come over from the Giants. This year things get bad enough so Jay Gruden gets fired.

Many people have the Cardinals and Raiders as being the worst teams. I believe both of those teams although bad have improved their rosters. The Bills play the above four teams five times this year. The Bengals and Giants are two of the Bills first three opponents. Could be a quick start for the Bills this year.