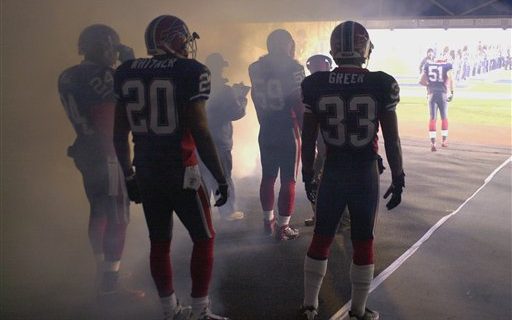 The Buffalo Bills will play a Monday night home game this season for the first time since hosting Cleveland in 2008. AP Photo/Don Heupel)

-Opening in Baltimore same as two years ago when they only had 160 yards of offense in a 13-7 loss.

-First home Sunday/Monday game in almost a decade. The Bills last hosted a Monday night game was 2008 when they lost 29-27 to Cleveland.

-The Bills are on the road for five of the first seven games of the season. That’s a tough first half of the season. The Bills might want to start AJ McCarron in this stretch before turning things over to a rookie.

-The end of the season is where all the division games land. Five of the last six games on the schedule are division opponents.

-Three games in December are always tough on ticket sales. The Bills host the Jets, Lions and Dolphins all in December.

-A late bye week for the Bills coming in week 11. The Bills will try to get revenge off of the bye by hosting Jacksonville the team that knocked them out of the playoffs.

-The toughest stretch of the schedule comes early from Week 3 to Week 8. Four of six on the road and the two at home are aginst playoff teams from last year.
-@ Minnesota- best defense in football allowing only 15 points and 275 yards last year.
-@Green Bay vs Aaron Rodgers in Lambeau is never fun.
-Host Tennessee, a playoff team with new DC Dean Pees formerly of the Ravens,
-@ Houston with Desaun Watson, JJ Watt, Jadeveon Clowney all healthy.
-@ Indianapolis as Frank Reich takes over a team hoping for a healthy Andrew Luck
-Hosting New England on Monday night.

-15 of the starts are at 1pm on Sunday. The only non one pm start is the Monday night game vs the Patriots.

-No Thursday night game is a bonus.