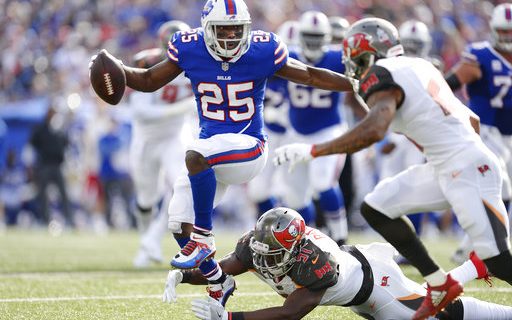 Now that the draft has passed the Buffalo Bills roster is starting to become clearer. The Bills have already filled in with 18 free agent signings and the Draft has added eight drafted players to the roster. This means 26 players have been added to the roster from last year. This doesn’t include undrafted free agents like Tyree Jackson and David Sills. The point is that most of these players will make the roster. This means the Bills are going to have a huge turnover in their roster from last year to this year. Somewhere in the neighborhood of 40-50% of their roster will be new players. That’s a very high percentage for an NFL team. This team should have more depth than last year’s team. Here’s a look at what I consider their strongest and weakest positions.

Running Back
Many including myself were a little surprised with the addition of Devin Singletary in the third round of the draft. The Bills now have four solid running backs in LeSean McCoy, Frank Gore, TJ Yeldon and Singletary. I don’t see McCoy being moved. He’s in the final year of his contract and there is little to gain by releasing him. No team will give you anything in a trade for him either. So I see the Bills going with all four backs this year. McCoy and Gore leave after this year and Yeldon and Singletary are your backs for next year. It’s a crowded backfield this year but if the Bills experience any injuries in this area they have a solid person to step up.

Defensive Tackle
The loss of Kyle Williams hurts this group but the addition of Ed Oliver makes up for the loss. Oliver fell into the Bills hands on draft day and by all accounts it was a steal. Oliver should fit perfectly into what the Bills want to do. His strength of penetrating through the line is exactly what they will ask him to do. Oliver’s ability to bring a much needed pass rush up the middle of the defensive line will help the Bills pass rush. Star Lotulelei eats up double teams and lets others run free. Star will never have huge numbers but his impact on the defense is seen by how well the defense plays when he is in the game. Harrison Phillips and Jordan Phillips played very well last year. The Bills rotate their defensive line so all four men will see a ton of playing time. Being strong up the middle on defense is important and I see this as one of the true strengths of what is expected to be a very good Bills defense.

Strength by Numbers
Brandon Beane has been honest in saying that the Bills wanted to fix the offensive line ‘come hell or high water.’ With free agency and the draft the Bills have added: Cody Ford, Ty Nsekhe, LaAdrain Waddle, Mitch Morse, Jon Feliciano, Spencer Long and Quinton Spain. That’s seven new faces that are expected to make the roster. The good news is that this means that we will never see Vlad Ducasse or Russell Bodine make the team this year. Will the offensive line be better? It can’t be worse. Just by pure numbers the Bills are hoping that they can find five guys that can come together. Big question of the off-season will be Dion Dawkins? Does he hang onto his left tackle spot? Do the Bills move him inside if he losses his job to Ty Nsekhe? This is one of the most interesting things that will come from the off-season.

Linebacker
When I say that linebacker is a weakness I’m looking at their depth. I like Tremaine Edmunds, Matt Milano and Lorenzo Alexander as the starters. These three were fine last year and should be better this year. Edmunds and Milano should improve with another year of experience. This is Alexander’s last year but he played well in his role last year. The problem is who is backing them up. One of the Bills draft picks that may get more playing time than people expect is Vosean Joseph. Joseph was a missile last year for Florida. He had 93 tackles and four sacks. The question for me is it seemed he free-lanced many times in their defense. Will he be a little more under control and stick with his assignments in the Bills system? Maurice Alexander and Julian Sanford back up at linebacker as well. All three back-ups seem to be guys the Bills will count on special teams. I don’t believe the Bills hope for these three guys to take any playing time away from the starters. The one place the Bills can’t afford an injury this year is linebacker.

Wide Receiver
The shock of the draft for most Bills fans was that they didn’t draft a wide receiver. The additions of John Brown and Cole Beasley in free agency will help. Robert Foster and Zay Jones now become your third and fourth best receivers on the team. The team still lacks a pure number one guy. Andre Roberts will make the roster as the key return man. The Bills may keep one more receiver from the likes of: Duke Williams, Isaiah McKenzie, Ray-Ray McCloud and David Sills. This receiving core would be fine if the Bills had one big boy to throw to. Without the true number one we will see how good these guys turn out to be. This is another area where the Bills can’t afford an injury. This area is average at best to begin with and an injury could really hurt Josh Allen’s development. My prediction is this is the area the Bills fans will want to improve most next season.