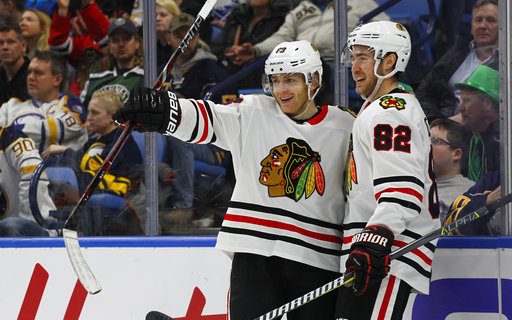 Patrick Kane (88) and Jordan Oesterle (82) celebrate a goal during the second period of Saturday's game with the Sabres. Their efforts fell short in a Buffalo win. (AP Photo/Jeffrey T. Barnes)

Almost nothing lasts forever in the world of sports. Yes, the Patriots keep winning divisions, Kansas keeps winning conference basketball titles, and Roger Federer continues to win tennis tournaments. But for the most part, continued excellence is an unreachable star.

Ask the Chicago Blackhawks, who came to town on Saturday to play the Buffalo Sabres.

The Blackhawks have had a nice run over the past nine years. They’ve made the playoffs in all nine years, and won three Stanley Cups during that time. For a franchise that hadn’t won a Cup since 1961, it’s the best era in team history.

But the playoff run is about to end. The Blackhawks have been looking up at the Central Division for most of the season. They’ll be going home in early April for a change. The biggest problem is that starting goaltender Corey Crawford is hurt. He has a 16-9-2 record and a 2.27 goals-against average, but only has played in 28 games. The other three goalies used by Chicago this season all have a GAA above 3.00, so that hasn’t helped.

The Blackhawks’ core players are still mighty good, even if they are on the far side of 29. Patrick Kane, Jonathan Toews and Duncan Keith represent a strong nucleus for the next few years going forward, even if they have some other gaps to fill. They are far from dead, but it’s a different time. It figured to be interesting to see how they might play on Saturday in a game that had no playoff implications.

It turned out that the Blackhawks played an entertaining game with the Sabres, but couldn’t hold a lead in the third period. That might not have happened a few years ago. The eventual 5-3 Buffalo win delighted everyone in the sold-out building but Kane’s friends and family from South Buffalo.

“I loved the outcome,” said Jack Eichel, who returned after missing about a month with an ankle injury. “This is the first I’ve beaten the Blackhawks. It’s nice to come back in the third period. … We found a way to win.”

Eichel is pretty good at history. The Sabres hadn’t beaten Chicago at home since Dec. 11, 2009. The Blackhawks went on to win the first Cup in their run the following spring.

This game was quite even for 40 minutes. There were a couple of memorable plays for very different reasons on the first two Chicago goals. Kane made a world-class pass to a streaking Jordan Oesterle for a tap-in goal. Later, Chad Johnson’s save bounced off Rasmus Ristolainen’s foot and rolled into the net. Not much the defenseman could do there, although he probably felt like digging a deep hole in the ice at the time.

Then came the third period, which started in earnest when Toews took advantage of a slight bobble of a rebound by Johnson to put Chicago ahead. It hasn’t been easy for the Sabres to come back in the final 20 minutes, but they handled adversity well.

“That’s due to our leadership group,” Nicholas Baptiste said. “They said there was plenty of time and that we were all right. “

Baptiste must have listened carefully. He tied the game with 17:43 left, and then won it on a similar deflection with a mere 1:56 to go. It was the first two-goal game of his NHL career, and his first game-winning goal. No, he didn’t save the puck.

“We wanted to get shots to the net, bodies to the net, and get the ugly goals,” he said. “That’s the way to win in this league. I was fortunate to get there and make some plays.”

Baptiste often teamed up with Justin Bailey and Evan Rodrigues – the Rochester Connection, for the moment – to provide some speed and energy for a team that’s been looking for that from the young players. And the return of the team’s leading scorer in Eichel was more good news in a rare afternoon win.

“It was so nice to have him back,” said Ryan O’Reilly, who had a goal. “When he gets the puck, the whole building wonders what he’s going to do with it. He makes us more dangerous.”

The Sabres ended a brief two-game losing streak and are 5-3-1 in their last nine. They jumped out of last place in the overall NHL standings, passing Arizona by a point for the time being. Buffalo hosts Nashville on Monday.

Meanwhile, the Blackhawks headed home after two losses in two games on a road trip. They’ll try again there to salvage something out of the remainder of a season that hasn’t gone the way they planned.