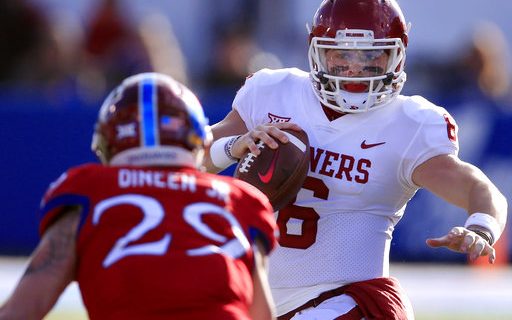 Darnold Vs Rosen
Sam Darnold might have won the game, but Josh Rosen looked like the better pro prospect in front of over 20 scouts. USC defeated UCLA 28-23 but that wasn’t the story. Sam Darnold has all year long been considered the top pro QB among most fans and scouts. When you saw the two players on the field side by side and compared them as NFL ready it was clear to the human eye that Rosen is currently far ahead of Darnold as an NFL ready QB. Rosen showed everything you want to see, he was accurate with the deep ball, great velocity and toughness in the pocket. He really put on a clinic as the ideal pocket passer. Rosen was 32 of 52 for 421 yards and 3 TD’s. Darnold on the other hand looked to leave the pocket too much. He needs to work on his progression of reads. Darnold leads the FBS with 19 turnovers and had another one in the game. His lack of awareness hurt USC before the half. He finished the game 17 of 28 for 264 with a rushing TD. This wasn’t a bad game by any means but he just didn’t look as ready for the NFL as Rosen. Rumor is Darnold may stay in school one more year. On Saturday night you can see that may be a wise decision.

Wisconsin gets their most impressive win
The Badgers strength of schedule has been a problem all year for anyone trying to figure out how good this Badgers undefeated team really is. Wisconsin defeated Michigan 24-10 in a hard fought victory to improve to 11-0. Michigan’s chance of winning ended when they lost QB Brandon Peters in the third quarter. Wisky was stopping the run all day and the Wolverines only chance to win was through the air. Wisconsin’s defensive coordinator is former Bills safety Jim Leonhard. Wisconsin plays Minnesota next week for the Paul Bunyan axe then their stiffest test will be Ohio State in the Big 10 title game.

Rumors are Lamar Jackson Might Be a WR, But…..
Lamar Jackson continues to impress with his athletic ability as a QB. Jackson again rushed for over 100 yards and threw for 270 in Louisville’s destruction of Syracuse 56-10. He accounted for 381 yards and four touchdowns in a game played in the driving rain. Rumors are out that Jackson might try to enter the NFL as a receiver if teams don’t see him as a legit QB. It will be interesting to see if a team will give him a shot as a QB.

Miami comes back against Virginia
The Hurricanes looked like they were in for a letdown after their big win over Notre Dame. Twice Miami fell behind Virginia by 14 points. Jaquan Johnson had an interception return for a touchdown, which was a key to a 30-0 run that Miami went on to remain undefeated. The Hurricanes won the game 44-28 but trailed 28-14 in the third quarter. The other story in the game was Virginia QB Kurt Benkert. He looked really good going 28 of 37 for 384 yards and four touchdowns.

Baker Mayfield either love him or hate him
It all started at the coin toss. Baker Mayfield went to shake hands with two kids and the Kansas captains. The Kansas side just stood back and wouldn’t shake his hand. Oklahoma as expected went on to romp KU 41-3. Baker Mayfield, a very emotional player that some love and some hate, made the news by grabbing his crotch and cursing at the Kansas fans across the field. He could also be heard telling the KU fans that they should “go cheer for basketball.” Some on social media can’t get enough of him and can’t wait for him to be their next QB. Others are afraid of having him be the face of the franchise. His character will be a fun topic debated by talk show hosts throughout the draft process. I have to admit, I like the guy, but can see how others might be afraid.

Other QB’s
Will Grier of West Virginia had the nastiest looking finger in the Mountaineers 28-14 loss to Texas. Grier’s finger pointed sideways as he walked off the field. It was disturbing if you saw it. Grier never returned and that ended WVU’s chances of winning the game.

Mason Rudolph nearly erased a 29-point deficit but Oklahoma State fell to Kansas State 45-40. Rudolph passed for 425 yards and three touchdowns. Rudolph didn’t have a great game. He was off the mark early and had 2 interceptions before the big comeback. Rudolph has been pegged as a QB the Bills could be interested in taking late in the first round of next year’s draft.

UB Could be Bowl Eligible with a Win Friday
UB defeated Ball State 40-24 on Thursday night. This sets up a game Friday at 1pm against Ohio at UB stadium that will determine if the Bulls can become bowl eligible. UB stands at 5-6 on the season and needs the win against the 8-3 Bobcats. Tyree Jackson became the first UB QB to throw for over 300 yards in three consecutive games. Jackson finished with 350 yards and four touchdowns. All four touchdowns went to stud receiver Anthony Johnson. Johnson had 153 yards and seven catches on the day. Some UB fans are worried that Johnson might forgo his senior season for the NFL draft. Johnson has been that good this year.