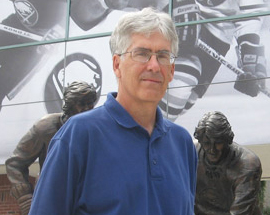 Budd Bailey has been involved in almost every aspect of the local sports scene for the last 45 years. He worked for WEBR Radio, the Buffalo Sabres’ public relations department and The Buffalo News during that time. In that span he covered virtually every aspect of the area’s sports world, from high schools to the Bills and Sabres. Along the way, Budd served as a play-by-play announcer for the Bisons, an analyst for the Stallions’ radio broadcasts, and a talk-show host. He won the National Lacrosse League’s Tom Borrelli Award as the media personality of the year in 2011, and was a finalist for that same award in 2017. Budd has published 12 books. Oh, he also named the Sabres’ mascot, “Sabretooth,” which he says will appear in the first sentence of his obituary. Follow him on Twitter @WDX2BB.