Budd Bailey: Where Did The Fighting Go? 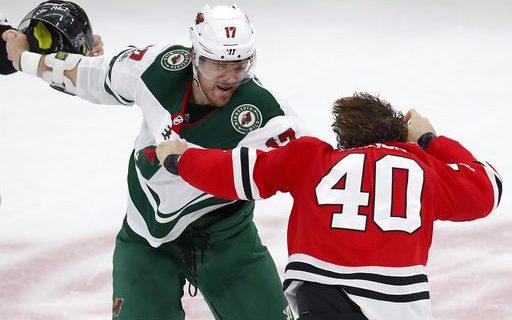 Where Did The Fighting Go?

Sometimes in the past month I’ve felt like I had been thrown in some cold water, as I attempted to relearn how to cover hockey games.

I hadn’t been at a Sabres game as a reporter since 2001 when I came back in early October. I haven’t watched many games on television since then either, so I am coming in with fresh eyes after 16 years. That’s quite a gap, and there have been new wrinkles added.

As you could imagine, security is tighter around the building. In the postgame media scrums, everyone more or less interviews the same person at the same time, since the players don’t hang out by their lockers. It’s tough to get a fresh interesting quote that way. Heck, they are even charging for pregame meals for the media now. (Don’t tell anyone, but they should have been doing it long ago.)

But the biggest point struck me about midway through my third game on the job. I had seen some pushing and shoving, but less than what popped up in the old days. And nothing beyond that.

During a break in the game, I leaned over to the veteran hockey reporter next to me and asked, “Does anyone fight in this sport anymore?”

He chuckled and said, “No. And not only don’t they fight, but they don’t hit much either. When they do, sometimes the other guy gets angry about it and starts something.”

When I talked to a season-ticket holder the other day about that conversation, he replied, “Yup, it’s tabletop hockey now.” I’ve looked over a few articles online, and fighting majors and suspensions have been at low levels for the past few years. That would seem to spoil the argument that fighting served as a safety value to prevent worse violations from happening.

I wondered back in the day when we’d get to this point. Fighting majors exploded after the 1967 expansion, as a way for bad teams to level the playing field against the established teams by slowing the game down and intimidating opponents. But that changed eventually. By the 1990s the sport had a handful of big guys who handled most of the punching – sometimes sent out to protect the stars, sometimes sent out to start a fight in an odd attempt to change momentum, and sometimes glued to the bench after the first period.

I guessed in that era that fighting would eventually decrease. The thought was that as the stakes went up, teams would need all the skill they could get to actually play the game. Enforcers sometimes didn’t even get into playoff games, especially after the first game or two, and were never seen in international play. Throw in some later worries about concussions for the combatants, and you can understand the numbers lately.

In addition, Ken Dryden makes an interesting point in his new book, “Game Change.” He writes that when the overtime rules were changed to allow for three-on-three play and for shootouts, it added emphasis on skating and scoring. Clearly, that wasn’t going to help the fighters get a spot in the lineup. And if a couple of shootout wins can put a team in the playoffs, a coach will do whatever he can to get them. His job might depend on it.

The quality of play has jumped several notches in the last quarter-century, and that’s good. Skill sells, and hockey is more popular in most regions of the United States than it ever has been before.

Still, a little of the emotion has come out of the game this way. Clean, physical play has declined, and the buzz in the building that came with that style has decreased too. It feels from the stands that there’s less emotion expressed outwardly now. It’s not fair to say that the players don’t care as much as they used to care, because that’s not the least bit true. The games are also a bit quieter at times. Maybe the game is attracting a slightly different type of fan now, as the ones who liked the more frequent scrum move on to another pastime.

This is the game we have today. It’s not necessarily bad or good when compared to the past; it’s just different. And it’s here for the foreseeable future. I’ll have to get used to it.

Budd Bailey has been covering Buffalo sports for over 40 years.  Read his observations here.