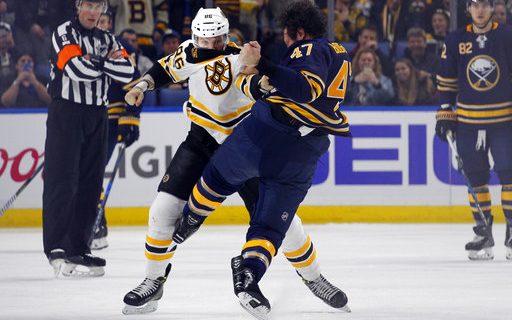 In the final two minutes of Tuesday’s game at the KeyBank Center, Tim Schaller of the Bruins had just bounced a puck from his own end past Rasmus Ristolainen of the Sabres at the right point. Like a long bank shot in billiards, the puck sped down the ice toward its chosen destination – an empty Buffalo net. When the puck went in, wrapping up a Boston win, Evander Kane of the Sabres slammed his stick into the boards.

It was, simply, another one of those nights for the Sabres.

Buffalo could argue that it deserved a better fate than a 3-0 loss to the Bruins before 17,811. However, we’ve seen this enough this season to realize that defeats in such games can’t always be attributed to bad bounces and misfortune.

“When you don’t score, you’re not going to win a lot of hockey games obviously,” Sabres coach Phil Housley said.

The first-year coach was right about that, since there are few 1-0 games decided in a shootout. Come to think of it, even Housley couldn’t have seen many games in which empty-net goals outnumbered scores with both goalies on the ice. Yet that rarity was what happened on Tuesday.

“It was a tough loss,” goalie Robin Lehner of the Sabres said. “We’ve got to get a goal to win it. It’s unfortunate.”

As low-scoring games go , this one had some entertainment value. The Sabres played a good first period, piling up 17 shots to Boston’s 10. But perhaps because there was no reward for that performance, the team took a step backwards in the second period.

“The disappointing thing for me is that when we trend in a good direction, we get away from what we do well,” Housley said. “We’ve got to stick with the gameplan. You’ll get a good bounce if you do. But we tend to do that.

“Look at Boston. They stayed true to their structure. They were not doing anything fancy.”

The Bruins beat Lehner with 10:14 gone in the second period. Jake DeBrusk put a shot perfectly into the top near corner for a 1-0 Boston lead. Sometimes that happens. And sometimes the Sabres can’t respond to it. Benoit Pouliot couldn’t complete a two-on-one break or find an open net, chances that had him staring at the ceiling later in his evening.

“When you get a shot at an open net with three guys sliding at you, you want to put it in,” he said. “I had chances tonight personally. I could have turned the game around. We’ll just have to come to practice and go back to work.”

The Bruins finished off what might be called a good road game by playing with discipline in the third period. The Sabres weren’t completely bottled up, but Boston seemed to clean things up in its own end without too much difficulty. David Backus added a second empty-netter in the final minute to finish the scoring.

“Boston is a good team, but it was not a 60-minute game for us,” Pouliot said.

The Sabres could have used a win in this situation. They are coming up on a stretch of seven straight games away from the KeyBank Center, including a “home game” in New York City on Jan. 1. Buffalo has one win in its last six games, and sunk to 4-10-2 at home for the season. It will have one more chance this week to earn a victory at home on Friday against Philadelphia.

In the meantime, the Sabres will try not to dwell on what has happened so far this season.

“It’s obviously frustrating to go through something like that,” defenseman Zach Bogosian said. “I don’t think there’s any room for frustration. There are a lot of games. You can be mad, but being frustrated isn’t going to help anyone. We have to keep pushing forward.”