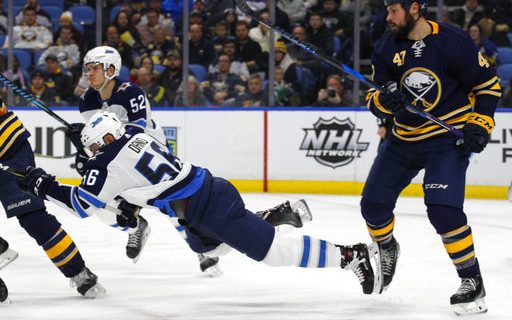 The Buffalo Sabres hadn’t played a home game since December 22 when they played the Winnipeg Jets on Tuesday night. It took until about, oh, the second period to learn what we needed to know about what the state of the team was after the long break.

Simply, little has changed since the World Junior Championships came and went, and since the Bills entered and exited the playoffs. The Sabres still have to be at their best to have even a chance to compete with the best that the National Hockey League has to offer. They were not close to that on Tuesday.

Buffalo dropped a 7-4 decision to the Jets before 17,398 in the KeyBank Center. It was the most goals that the Sabres had allowed this season.

And while we’re on the subject of season records, coach Phil Housley’s comments were as stinging and frank as they’ve been all season. The remarks started when he commented on the Jets scoring three straight goals in the second period to take control of the game.

“In the second we got caught on some long shifts, and they finally wore us down,” Housley said. “They have a deadly power play. We weren’t smart in that area. There was a lack of respect and urgency playing defense. That’s not only in the defensive zone. That starts in the offensive zone. … We sit and wait at times, and we’re hoping that somebody makes a play and don’t get back.”

But Housley wasn’t finished at that point, taking it a step further.

“There is a lot of cheat in our game,” he said. “They think points (as in scoring) are more important than playing solid defense, and you can see the results that are coming. The one thing that really irritates me is that we’ve got really good fans coming to the game. There’s something for our guys to play for. Let’s play for them. They are coming here and spending their hard-earned money. We have to be better at home.”

This was not a night to be selfish or to give less than a maximum effort. The Jets may be the most anonymous good team in professional sports right now, but they can play. Winnipeg has a ton of speed and plenty of skill, so Buffalo had to be ready from the outset. But a penalty led to an opening power-play goal by Patrik Laine. Then, after Buffalo tied the score, goalie Robin Lehner allowed two goals on shots that should have been stopped.

“First of all, we need saves early in the game,” Housley said. “We get the tying goal in the first and we need saves.”

Lehner exited in favor of Chad Johnson, who couldn’t hold off the Jets either, even if he made them work harder for their goals. The Sabres did some scoring once they fell behind by a 5-1 count. Ryan O’Reilly, Jason Pominville and Jack Eichel (the second of two goals) at least made the final score a little more respectable, but that wasn’t fooling many people.

That included a fan base that had many, many people leave after the second period – even though the high price of tickets should provide a little incentive to stick around to watch the final third of the game. That tells you what you need to know about what sort of contest it was.

“The execution is not there,” Lehner said. “I’m surprised and disappointed. It’s frustrating for us, and it’s very frustrating for our fans in Buffalo. All we can do it get back to work and try to get better.”

NOT A PRETTY PICTURE

Just to recap, the Sabres have now lost five in a row – earning a single point for the overtime loss in the Winter Classic and dropping every game since then in regulation time. They have given up almost five goals per game in that span.

“We had a tough road trip – 0-3 with zero points,” Eichel said. “We were playing good hockey before that. I don’t want to blame the Winter Classic for that. It was a great experience.

“It’s definitely tough. We lost a few on the road, and then when you come back those games are never easy. We need to work on playing in all three zones.”

The Sabres are back home on Thursday to host Columbus. Then they go seven days between games – the NHL’s bye week – before playing in New York against the Rangers on Jan. 18.