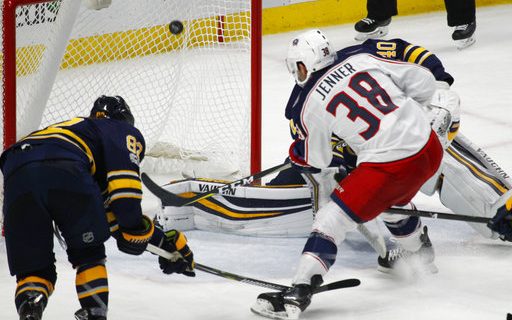 We’ve reached the first-quarter mark of the first period of the current NHL season, and it’s fair to say that the Buffalo Sabres keep finding new ways to lose.

You’d think they would have run out of ideas by now.

Yes, the games have had a certain similarity at times. The Sabres are good enough to hang around with most opponents. But they haven’t been quite good enough to score a key goal at the key time. That’s why they are 30th out of 31 teams.

The latest example of that came on Monday night before an announced crowd of 16,551 – several of whom must have been home preparing the turkey for Thanksgiving dinner – as the Sabres lost to the Columbus Blue Jackets, 3-2. That’s six games without a win (0-4-2).

The bigger picture is that Buffalo fell to 5-12-4 on the season, for 14 points in 21 games. That’s not the sort of pace that will make games in March and April relevant.

“We expect more out of us,” Sabre forward Sam Reinhart said. “We do it in spurts, but you’re never going to be good that way.”

This one fell into a relatively familiar pattern of little action for long stretches. It took 24 minutes for someone to score, and it was Pierre-Luc Dubois doing the honors for the Blue Jackets. Then it was back to dull hockey for another stretch of time that lasted into the third period.

You could almost tell that the Sabres would let out a gasp if they ever jumped out to a 2-0 lead after 10 minutes of a home game.

“It is difficult,” Jason Pominville said about the team scoring slump. “It is a long season for everyone and you’ll have stretches like this. But what the reason for it is, I don’t know. It does happen to everyone sometimes. We just have to dig deep and simplify things.”

Columbus made it 3-0 before the halfway point of the third period on goals by Artemi Panarin, a whistler into the top corner, and by Boone Jenner. The odds for a comeback seemed long at that point, since it was starting to look as if Buffalo wouldn’t score three goals during the homestand.

But 13 seconds after the Jenner goal, Sam Reinhart deflected a puck into the net on a shot by Victor Antipin to get the Sabres on the scoreboard.

“I thought it was in,” he said about the play, which needed a review before it counted. “It was off my stick between my hands.”

Then with less than four minutes to go, Evander Kane got his 12th, a snap shot from the left side. No other Sabre has more than seven this season. Buffalo coach Phil Housley thinks there’s a simple reason for that.

“He shoots the puck,” he said. “He has the most shots on the team.”

It could have counted …

The excitement built when Seth Jones of Columbus earned a penalty with 1:55 left. Buffalo got the puck bouncing around the goal a few seconds later, but the referee’s whistle sounded before the puck did/did not cross the goal line, depending on which coach was doing the talking after the game. But the man in the striped shirt had the last word on the play, which could not be officially reviewed under the rules.

“I couldn’t really see it,” Reinhart said about the play. “The Jumbotron had as good a look as any,” but even that wasn’t conclusive.

A good Blue Jackets team hung on after that, perhaps a little lucky to escape with a win after Buffalo’s frantic finish.

Thus ends an extremely difficult long weekend for Buffalo’s two most popular sports teams. The Sabres lost all three games over the course of four days. On their off-day, the Bills went to Los Angeles to play the Chargers, and … you probably know there was no happy ending or even a stirring comeback in sight there.

“I feel it’s a very rough time here – not only for the fans, but for the guys in the locker room,” Housley said. “The coaches didn’t envision this for us. This is testing us. We’ve got to push forward.”

The homestand continues on Wednesday night against the Minnesota Wild.