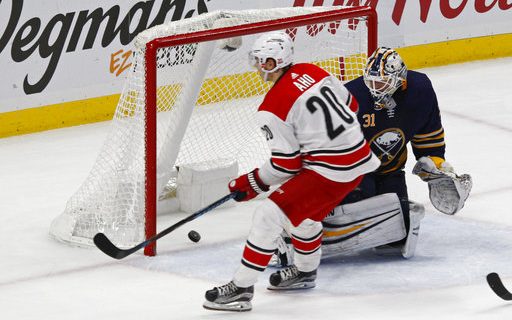 Just when it looked as if the Buffalo Sabres were poised to end their current losing streak on Saturday, the Hockey Gods laughed.

Really, after the way this season has gone, did you expect anything else?

The Sabres were tied with the Carolina Hurricanes, 1-1, late in the third period, and appeared to score the go-ahead goal. A big win – which after going 0-2-2 in the previous five games is defined as any win – seemed imminent.

“That’s what happens,” said defenseman Justin Falk, who gets credit for facing the media after losing the puck on the game-winner by Sebastian Aho. ”Maybe we’re not working hard enough to get the bounces.”

It was a strange night of hockey in which the Sabres almost made 10 minutes of good play stand up for a win. As for the first 50 minutes, well, let’s say the customers didn’t get much value for their entertainment dollar. Buffalo didn’t even have a shot on goal for the first 17 minutes of the game.

Maybe that’s not surprising for a team that has scored exactly one goal in five of its last seven contests, but that’s doesn’t make it any easier to swallow.

“We’ve had some chances, but we need to generate more offense as a team,” Evander Kane said. “It’s not only a matter of execution, but it’s a matter of taking the puck to the net instead of playing on the perimeter way too much.”

For a while it looked as if a Justin Williams goal – as he popped out of the penalty box and made a nifty move on a two-on-one break – might hold up. But in the third period, something lit a fire under the Sabres’ top line. Jack Eichel was skating around most of the Hurricanes, a dynamic force on the ice. Kane finally got the Sabres on the scoreboard with 7:33 left, and when a rebound of a Sam Reinhart shot bounced off Kane and into the net, the fans could let out an honest-to-goodness roar.

But those same fans sighed when it was ruled Kane more or less kicked the puck into the net. No goal.

“I didn’t agree with the call,” he said. “I was going hard to the net, and I was self-conscious of not kicking it.”

THAT’S HOW THE PUCK BOUNCES

Less than three minutes later, Falk couldn’t keep a bouncing puck from going behind him. Before anyone could blink, Aho was off to beat Chad Johnson for the winner.

“I went to pick it up after it landed,” he said. “I thought it had settled down enough.”

Coach Phil Housley added, “It’s a 1-1 game late in the third period, we’re battling them, we make a mistake and it ends up in our net.”

The Sabres find themselves at 5-11-4 after extending the winless streak to five games. They are still looking up at everyone in the NHL in points except Arizona, and the Coyotes even gained ground on Buffalo with a win Saturday.

It was not the start to a big four-game homestand – which in theory represents a chance to turn the ship around a bit – the Sabres wanted, particularly on offense. Buffalo will get another chance to do that on Monday night when it hosts Columbus.

As Housley understated when asked about his feelings after the game, “It is testing my patience.”