It was a rather typical Sunday until 12:35 p.m. I had run “The Freezer 5K,” a 5-kilometer race at 11 a.m. in downtown Buffalo, raced home for a shower and a change of clothes, and headed to the Bills’ game in Orchard Park. After all, who wants to pass up a free ticket to a game with some pals from high school? I heard stories of some snow at New Era Field on the radio, but figured it was just a passing burst.

Then when I crossed over the Buffalo line on Route 5 in Lackawanna, it started to snow. In hindsight, I guess there should have been a flashing sign on the side of the road that read, “Abandon all hope, ye who enter here.” By the time I reached the Ford Plant, it was snowing quite hard. 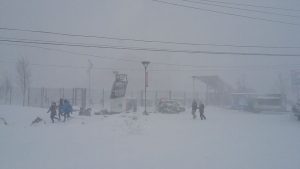 Three things happened in the next half-hour that caught my interest:

• I usually drive down Bayview Road as a shortcut to Big Tree Road on the way to the stadium. I didn’t this time, because I never saw Bayview Drive. It was missing in the snow. I proceeded down to Big Tree, which I did spot.
• After parking at the Erie CC lot, I walked through a few inches of snow toward the stadium. There is a paved road of sorts connecting the parking lots for the college and the stadium. About halfway there a few people were walking the other way. “Where do you think you’re going?” one of them asked. “Toward the sound of the microphone,” I answered, because you could not see the stadium from there. In fact, you could not see the stadium from Abbott Road. Ridiculous.
• When I reached the entrance gate search, some people were asking how they could leave the stadium. That’s right – it was 1:02 p.m. at a game with a 1 o’clock kickoff, and some people already had enough.

It took me a while to get to my seat, fairly low in the 300 level on the south side of the stadium. On the way, I heard some colorful variations of “I can’t believe I’m here” from several people. Upon greeting my friends, I brightly asked, “What did I miss?” They told me that the score was 0-0, the field disappeared every so often, and about three passes had been thrown. One said it sort of resembled the Army-Navy game the day before, with snow added.

I didn’t wear my entire wardrobe for the game, only a long-sleeve t-shirt, hooded sweatshirt, thick sweater, parka, cold-weather running tights, lined sweatpants, wool socks, boots, gloves, and a hat. Since it was 29 degrees, I was actually warm enough. The biggest problem was that the snow kept landing on my clothes, and then some of it melted – particularly when I ducked into a covered area, like the concourse or a bathroom. So everything was rather soaked, and it wasn’t going to be dry until I got home.

It was a bit of a festive atmosphere in the stadium. Everyone seemed to have the attitude of “we’re here, so let’s have fun.” We marveled when anyone ran well enough to get a first down, and enjoyed the punts that plugged into the snow like a nicely struck 6-iron on the green.

I did say to my friend John, “Don’t go mentioning the O-word today – overtime.” Naturally, that was what we got, after one of the great extra points in football history to tie the game. At least the fans went home happy with the victory. The drive back had some slips but conditions turned much better when we entered Buffalo.

This was that rare sporting event where the experience of the fans might have been more interesting than the game itself. Would I do it again? Probably not. But I’m definitely saving my ticket.