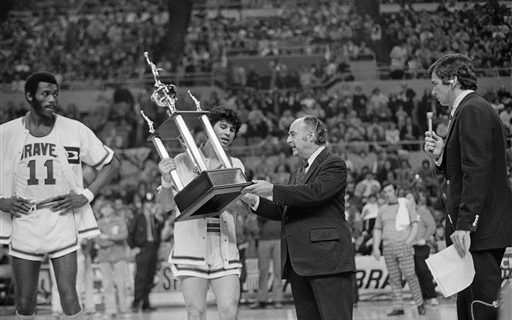 When Budd Bailey moved to Buffalo in the 1970's, Ernie DiGregorio, Bob McAdoo and the Braves made it feel like the Disneyland of sports. (AP Photo/CZA)

When I moved to Buffalo, I thought I was coming to Disneyland.

It was 1970, and I had spent the previous five years as a sports-loving youngster in Elmira. That was a nice little town that even had a Double-A baseball team at the time. I made plenty of friends there, and still keep in touch with some of them. But the sports scene was a little weak, at least as compared to our previous home in Northern New Jersey. I think the biggest sports event of the year in Elmira was the rivalry high school football game between Elmira Free Academy and Southside. (Footnote: Those two schools merged their teams a few years ago, which must have made the sports calendar there even more uncrowded.)

My father worked at a fire extinguisher plant in Elmira, which announced in late 1968 or to that it would close in the near future. At first we thought we’d be moving to Ranson, West Virginia, located in the eastern panhandle of the state. We went on a scouting mission there one time, and I saw outhouses behind some homes. Then Dad later came home with the news that we wouldn’t be headed to West Virginia. He’d be working in suburban Buffalo.

Shuffling Off to Buffalo

I believe my reaction was along the lines of – if I have to move somewhere as a 14-year-old, Buffalo was a great choice.

Channel 4 was always on our cable television system in Elmira, so I had been watching Van Miller present the sports news on WBEN-TV for five years. Therefore, I was familiar with what was happening in the sports world there, which was a lot.

For starters, Buffalo had hit the jackpot in terms of expansion teams that year. The Buffalo Braves and Buffalo Sabres would begin play that fall. I had been an NBA fan all my life, and had picked up an appreciation for hockey in the late Sixties thanks to Bobby Orr and Phil Esposito with the Bruins. Then there were the Bills, which were about to become a full partner in the NFL as the merger with the AFL was about to be completed. The Bills had a famous running back by the name of O.J. Simpson who merely needed a better team around him to become great.

And while Buffalo wasn’t picked for a baseball expansion team in 1968, there was still talk of building a domed stadium somewhere in the area for the Bills. That type of facility might be an attractive spot for an existing MLB team, the logic went. I was too young to understand all the legal angles and irregularities of that stadium plan, which ended in an avalanche of lawsuits. Come to think of it, I still am.

Those teams in my first years in Buffalo were never champions, but they were usually entertaining. Players like Simpson, Bob McAdoo and Gil Perreault were always worth the price of admission. No wonder I was the one who stayed in town, when the rest of the family eventually left, and I ended up in the sports media.

That excitement surrounding Buffalo as a metropolitan area didn’t last forever. They didn’t call it the Rust Belt for nothing. The economic problems cost Western New York the Braves, and probably was a factor of the region missing out when the Big East Conference changed college sports in the Northeast forever in 1979. But finally, there’s a sense that Buffalo is bouncing back. We finally remembered as a community that we have a waterfront, and construction cranes are again sighted here on a regular basis.

Here I am, 47 years after moving here and still around. About half of that time was spent at The Buffalo News, working in the sports department. I had just given notice from that job in order to retire when Paul Peck and Kevin Sylvester called and asked if I’d be interested in working at Buffalo Sports Page. After spending about a week in order to work on some final stories at The News and cleaning out some files, we had the easiest negotiation in history. I was told, “Write whatever you want,” the sweetest words in the English language for a writer.

What I hope to do for Buffalo Sports Page is to turn Buffalo back into Disneyland, and invite you along as we go exploring. I want to write essays that no one else would do – come up with interesting approaches on the news of the day, and write about subjects that might be otherwise ignored.

It doesn’t take long to make up a wish list. I’ve never been to a night’s racing at Lancaster Speedway. Never seen FC Buffalo or the Buffalo Beauts. Somehow I’ve only been to one sporting event that matches Canisius and St. Joe’s in anything, in spite of the fact that those two high school rivals play each other in something every day from September to May. I haven’t been to St. Bonaventure for a basketball game in years. If I go to a sporting event while out of town, I’ll tell you what struck me about it. I’ve got a ton of knowledge and a bookshelf full of reference material about the Bandits after covering them for nine years, and I don’t want to let it all go to waste. Maybe something will happen in a game, and it will remind me of something from the past.

I also want to continue a dialogue with fans, which started when I was a talk-show host on WEBR in 1978. And my Twitter account (@WDX2BB) is always open for business. The rules haven’t changed in 40 years – if someone is nice enough to contact me for information and conversation, I’ll be polite and respectful in return.

I can’t wait to see what will happen next. I hope you’ll come along for the ride.