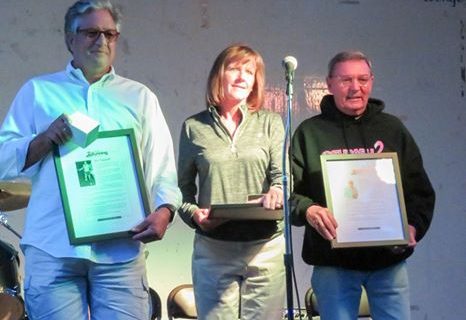 This the latest class of inductees in the WNY Running Hall of Fame (Photo: Mike Beato)

Three people were inducted into the Western New York Running Hall of Fame on Friday, Sept. 1. That brings the total to 32 in the past seven years. I was lucky enough to write and give the induction speeches for this year’s class, and they really deserve a little notice beyond the crowd that gathers at the Hall of Fame race in Buffalo each year. So here’s a shortened version of the speeches:

Sue knew she liked athletics as a younger, but it took her a while to find her sport. She went through the usual options for girls in the 1970s, and found that her skills weren’t a good match for them. Then she tried running, particularly at long distances. Not only did she like that, but Sue was good at it – not that she had much competition. In high school, girls weren’t even allowed to run more than 400 yards in track, and there was no cross-country team for them.

So what did Sue do? She ran with the boys. It probably wasn’t the coolest thing for a high school girl at Clarence Central High School to do, although I’m sure that others noticed that she was often surrounded by athletic guys in those ridiculously short shorts that were worn at the time. From there, Sue went on to set a national high school record in the two miles, and became a two-time state champion as distance events were opened up to girls. That led to a selection as an All-American. From there, it was on to a full scholarship at Eastern Kentucky University. There Sue was a four-time All-American in track and cross country, and won six titles in the Ohio Valley Conference. Her performance in the 5,000 meters set a record that lasted 36 years.

Once Sue was done with college, she decided she’d had enough of competition and retired. She got married and raised four daughters who went on to collegiate running careers. That got the second generation of female runners off to the proverbial flying start. She lives in Barnesville, Ohio, where she still does some coaching of tomorrow’s standouts. If you’re a woman who has run in races at any time, remember that Sue was one of those who paved the way for you.

When Jim was told he was going into the Hall of Fame, he might have thought that it was a local basketball Hall of Fame that was calling him. After all, he’s been a top official for years and years. But oddly, it was basketball that led him to this point.

Jim was running laps at Buffalo State one day to train for basketball season when a woman there asked if he’d be interested in taking part in some races. He was, and did so. He even ran the New York City. From there it was a short jump to organizing races. He had some experience putting together softball tournaments, so he knew how to organize people and match them to tasks. That’s how the Casey’s Nickelodeon race began in 1981. The event turned into the Black Tower race when it picked up a title sponsor and later became the Subaru 4-Mile Chase.

Along the way, Jim noticed that none of the area’s best runners were running in his race. It turned out they were going out of town on summer weekends to take part in events that offered prize money. Jim found a way to offer prize money as well. Not only did top local runners stay home, but other great runners came in from out of town. Therefore, the Chase became a way for local runners to compete against some world-class athletes. What other sport offers that opportunity to do that?

In addition, Jim has offered support and guidance to everyone and anyone who has asked. He has helped a number of races survive and thrive over the years with his good advice.

Alex didn’t go to high school; he went to a runners’ factory. After all, St. Joe’s has cranked out great runners and teams year after year for decades, and a few of their coaches have been honored here. He is one of the best of that group.

Alex was part of a legendary Marauders’ team in 1971, one that was ranked third in the country. He ran around Delaware Lake in that season – a 2.5-mile course – in 12 minutes flat. That supposedly is a record that still stands – 46 years later. Alex was part of a Marauders team that set a record in the distance medley at the 1972 Penn Relays. By the way, that mark still stands as well. He still holds several school records, and has been honored by that school’s Hall of Fame several times.

Alex went to Fordham in New York City. He became a two-time Division I All-American for the Rams. Alex was a member of the two-mile relay team that won the IC4A Indoor Championship in 1975 at Princeton.

Along the way, Alex gave something back to Western New York running. He founded the Greater Buffalo Track Club, was one of the original members of the Checkers Athletic Club, and was the first race director of the Corporate Challenge.