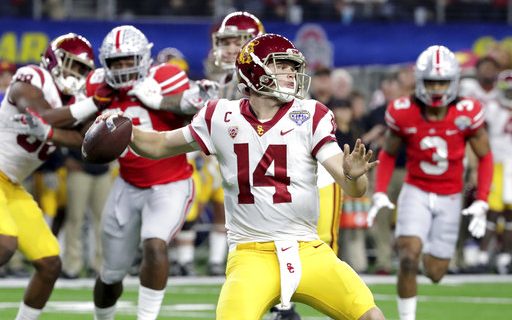 Buffalo Sports Page’s Bob Gaughan looks back at a busy bowl week in college football, with a focus on the top quarterbacks in the sport.

Ohio State defeated USC 24-7 in the Cotton Bowl. The Buckeyes feel they were snubbed by not being in the playoff. The Buckeyes defense caused four turnovers that led to 21 points. The story of the game from a draft perspective was the struggles of Sam Darnold. Darnold threw for 356 yards but his turnovers were costly. He threw a pick six early in the second quarter that put the Buckeyes up 17-0. Along with the interception Darnold all so fumbled twice which hurt the Trojans chances for a comeback. Darnold has until January 15th to decide whether to enter the NFL draft. JT Barrett ran for two scores to lead the OSU offense.

In his farewell performance it was a game that Lamar Jackson would like to forget. The Louisville QB threw four interceptions that helped propel Mississippi State to a 31-27 win in the Taxslayer Bowl. Jackson was outplayed by freshman QB Keytaon Thompson of the Bulldogs. Thompson playing because Nick Fitzgerald was injured, ran for 147 yards and three touchdowns. The Bulldogs were playing without head coach Dan Mullen (who went to Florida) and both of their coordinators. Safety Mark McLaurin intercepted Jackson three times in the game. Jackson inaccuracy will be something that will be talked about and will hurt his draft stock.

Penn State improved to 11-2 on the season as they jumped out to a big lead and held on to beat Washington 35-28 in the Fiesta Bowl. Trace McSorely threw for 342 yards and two touchdowns. The Ninety Lions offense gained a season high 545 yards on the Huskies defense. Saquon Barkley didn’t sit out the game like many draft prospects would have. Barkley ran for 137 yards in his final game including a dynamic 92-yard run in the 2nd quarter that gave PSU a 28-7 lead. The loss gave the Pac-12 a 1-8 record in bowl games this year. The worst ever record for a power 5 conference.

I think the best-coached team in college football is Wisconsin. Paul Chryst gets the most out of his talent. The Badgers went down to Miami and defeated the Hurricanes in the Orange Bowl 34-24. The victory improved the Big 10’s record in bowl games this year to 7-0. The Hurricanes jumped out to a 14-3 lead after the first quarter. Badgers QB Alex Horibrook then threw four TD passes and was near perfect on the night. Jonathan Taylor added 130 yards on the ground. The turnover chain that Miami made famous this year should have been on the Badgers side of the field. Wisconsin intercepted Hurricanes QB Malik Rosier three times.

NFL pro prospect wide receiver Alan Lazard looked like a men amongst boys as he caught 10 passes for 142 yards and a touchdown leading Iowa State to a 21-20 win over Memphis in the Liberty Bowl. Lazard is a big bodied receiver that NFL teams will covet in the draft. He was named the MVP of the game. Riley Ferguson struggled to move the Memphis offense against a stout Cyclones defense. The colder weather seemed to affect Ferguson who wore gloves for the first time all year on his throwing hand. Memphis was averaging 47 points a game coming into their first ever Liberty Bowl in their hometown. The Tigers missed star RB Darrell Henderson who sat out with a hamstring injury.

NC State sent Todd Graham home after a 52-21 blowout loss in the Sun Bowl. Graham was fired as the ASU coach and Herm Edwards will take over the Sun Devil program. Edwards will need to button up a defense that gave up six rushing touchdowns on the day. Nyheim Hines scored three of those six TD’s for the Wolfpack. NC State played without star DE Bradley Chubb who sat out knowing he was entering the NFL draft. The Wolfpack defense didn’t need Chubb as they held ASU to 10 points through three quarters.

Youngstown NY native Dave Clawson led his Wake Forest Demon Deacons to a entertaining 55-52 win over Texas A&M in the Belk Bowl. John Wolford threw for 400 yards and four touchdowns for Wake. Clawson has turned the program around winning two bowl games in a row. This year Wake won eight games their most wins since 2008. The teams combined for 107 points and 1260 yards. This was the fourth highest scoring game in college football history. Future NFL player WR Christian Kirk led A&M. Kirk caught 13 passes for 189 yards and three touchdowns. Kirk is expected to go in the first round of next year’s draft. A&M will have a new coach next year in Jimbo Fisher.