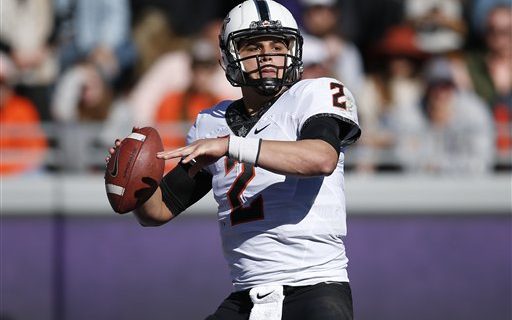 Top Five Offensive Players Per Position Heading in to the 2017 season.

Here are the top five players per position on the offensive side of the ball. I realize this is way too early for the NFL draft, but many people like to follow the college season. This list is at least a start to the draft process.

1-Sam Darnold, USC- The closest to a sure thing to come out since Andrew Luck.
2-Josh Allen, Wyoming- High upside. Could be the next Derek Carr.

2-Derius Guice, LSU -At this point Barkley and he have separated themselves from the rest of     the class.
3-Royce Freeman, Oregon -Big back with big play ability.
4-Ronald Jones, USC -Extremely fast. Not an every down back, only 195 lbs.
5-Sony Michel, Georgia- Better prospect than teammate Nick Chubb in my eyes.

1-Quenton Nelson, Notre Dame- May be best lineman in the draft.
2-Billy Price, Ohio State -Can play guard or Center.
3-Mason Cole, Michigan- QB of the Wolverines line.
4-Tyrone Crowder, Clemson- Looks like Gabe Jackson of the Raiders.
5-Larry Allen Jr, Harvard- If he’s half as good as his father……..