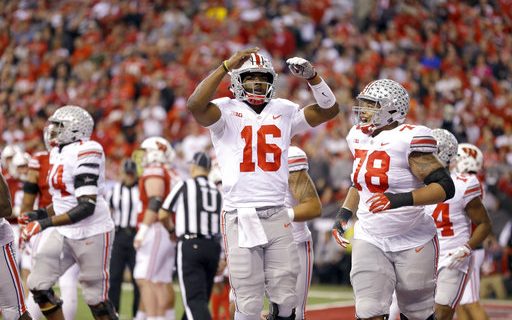 Ohio State Edges Wisconsin; Debate Between them and Alabama
JT Barrett had knee surgery six days before the Big 10 title game. He started and threw two touchdown passes and ran for another as the Buckeyes handed Wisconsin their first loss of the season 27-21. The other star for OSU was RB JK Dobbins who ran for 174 yards on over 10 yards per carry. The speed for Ohio State was evident as they had the much better athletes. Wisconsin is better coached and hung around with a stout defense. The Badgers had the ball and a chance to win in the end, but were picked off on a 4th and 20 with a minute to go to seal the victory.

Now the debate rages on between who will get the fourth spot in the title picture. Ohio State the Big 10 champs still have that horrible lost to Iowa on their resume. Alabama has only one lost but they didn’t make the SEC title game. I feel the committee will go with Alabama.

Clemson Blows Out Miami
Clemson left no doubt that they are the kings of the ACC. Miami had no chance against the Tigers defense and gave little fight in a 38-3 drubbing. Kelly Bryant was marvelous going 23 of 29 for 252 yards and one TD passing and another on the ground. The Clemson defense almost shutout the Hurricanes and held them to only 214 yards of offense. Clemson should be the number one seed in the playoff.

Georgia Gets Revenge on Auburn
Auburn had whipped Georgia earlier in the season on the Plains. The Bulldogs defense gave up 488 yards to Auburn in their November 11th contest. In the SEC title game the Tigers could only muster 259 yards. Jake Fromm was an efficient going 16 of 22 for 183 yards and two touchdowns. Auburn was burned by their own mistakes. They had a field goal blocked that would have tied the game at 10 and 2 fumbles killed their chances of a comeback. The Bulldogs will try for their first national title since Herschel Walker’s team back in 1980.

Baker Mayfield Leads Oklahoma
Baker Mayfield left no doubt that he will win the Hesiman Trophy next week. He threw four touchdown passes in a 41-17 romp over TCU. Mayfield was named MVP of the Big 12 Championship game after going 15 of 23 for 243 yards and the 4 scores. The 41 points was the most allowed by TCU this season. Lincoln Riley in his first year at the helm of the Sooners will lead them into the playoff. Riley is only 34 years old and the youngest coach in the FBS.

UCF Wins the Title and Loses their Coach
Central Florida won another shootout in consecutive weeks to stay unbeaten. Last week they edged South Florida and this week they needed double overtime to put away Memphis 62-55 in the AAC title game. Less than 2 hours after their victory Scott Frost was named the new coach of his alma mater Nebraska. It was a bittersweet moment for UCF that was winless just two years ago and now are sitting at 12-0. Frost and UCF leave on good terms in fact AD Danny White said there’s a chance Frost will coach them in their bowl game. In the game, QB’s Riley Ferguson on Memphis and McKenzie Milton of UCF put on a show. Milton threw for 494 yards and Ferguson threw for 471.

USC Tops Stanford for the Pac 12 Title
USC topped Stanford 31-28 Friday night to win their first Pac 12 title in nine years. The key sequence occurred with USC up 24-21. Stanford drove to the USC 2 and had third and goal. Stanford tried twice to run for a touchdown and was stuffed both times. USC then went on a 99 yards drive to put them up 31-21 and effectively seal the game. Sam Darnold was 17 of 24 for 325 yards and two touchdowns. Just like in their first contest USC dominated the yardage battle 501-343. Bryce Love ran for 125 yards for the Cardinal but a gimpy ankle left him on the sideline for the key sequence of the Trojans goal-line stand.

Toledo Rolls to MAC title
Toledo ran out to a 38-0 lead and cruised to a 45-28 win over Akron in the MAC title game. Logan Woodside threw for 307 yards and Terry Swanson ran for 180 to lead the Rockets. Toledo finishes the season at 11-2.

UB Awaits their Bowl Bid
81 teams finished this year with at least 6 wins. With 78 bowl bids out there, three teams will not go bowling in spite of being bowl eligible. The Bulls finished the season on a three game winning streak. Whether they make a bowl or not, nothing will change that this was a very successful season for a team that Vegas picked to win 3 or 4 games. The key components to this team will all be back next year. Tyree Jackson threw for over 2000 yards in only 8 games. Pro prospect WR Anthony Johnson was electric all season. Johnson had over 1300 receiving yards and a school record 14 receiving touchdowns. Khalil Hodge led the defense with 154 tackles, which was second most in school history. Next year the Bulls should be the favorite to win the MAC east and he expectation level will be higher than it has ever been for the football team.