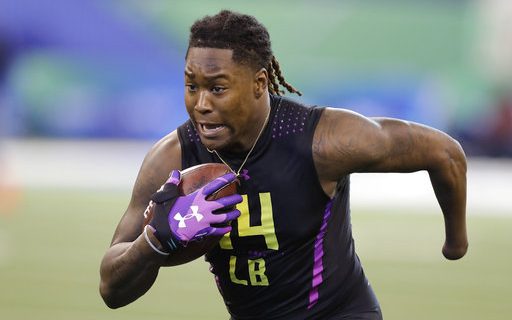 What players on defense impressed the scouts at the Scouting Combine?  What players hurt their draft stock?  Bob Gaughan has the winners and losers from the defensive side of the ball.

DE-Bradley Chubb- NC State- Maybe put himself in the number one pick overall with his performance. A 4.65 in the 40 to go along with his fluidness in the drills. He checked all the boxes of an elite pass rusher. The best pass rusher in the draft usually goes in Top five if not number one.

LB-Shaquem Griffin- UCF- the feel good story just got better. First he bench presses 20 times with essentially one hand and then he runs a 4.38 for a LB. It will be so interesting where he is drafted.

S-Justin Reid Stanford- the most well spoken player at the combine. Broke down coverage’s for the media. You can see how he would not only impress on the field but in interviews as well.

LB Kyle Vander Esch-Boise State- some compared him to Zach Cunningham last year. Good for Kyle he his bigger, faster and stronger. Tested better across the board.

Edge Harold Landry- Boston College- one of my favorites for the Bills tested out great. A season plagued by injuries meant his junior season was much better than this year. Across the board he tested well. Hope he now makes it to 21.

LB-Fred Warner-BYU-He had a good Senior Bowl week and kept the momentum going here. He didn’t look lost in space like many others. He was used in a variety of roles at BYU and can see NFL teams that fall in love with his flexibility.

DT-Taven Bryan- Florida- he posted up numbers that an elite DT would put up at the combine. 4.98 40 for a man 291 lbs is so impressive. Let the Aaron Donald comparisons start.

DT-Da’Ron Payne- Alabama-we knew he was a great run stuffer, but he showed some athleticism at the combine that showed he might be able to rush the passer more than the Tide asked him to do.

S-Derwin James-Florida State-James had a disappointing year this past year. The combine showed why he is a freak. Hybrid safety or big corner, he has elite skills.

CB- Jaire Alexander-Louisville-one of the best corners in the draft already impressed me the most. In one word he looked so smooth. The way he backed pedaled and then drove on the ball as better than anyone I thought.

DT Maurice Hurst-Michigan- sent home with a heart condition. Supposed to be a first rounder now has serious health concerns.

LB-Josey Jewell-Iowa- we knew that this day could be hard for him. A great football player but how athletic is he. His 40 time of 4.82 was disappointing. Most teams want their LB’s to run at least in the 4.7 range.

DT-Tim Settle- Virginia Tech- a big bodied guy that needs to be quick at least in a phone booth. I knew his 40 time was going to be bad but his change of direction drill skills and quick burst didn’t seem to be there at all.

DT Andrew Brown Virginia-one of my guys that I was so impressed with at the Senior Bowl didn’t show up at Indy. The explosiveness at the Senior Bowl wasn’t there. The 3 cone drill so important for a defensive lineman was not good for Brown.

Edge-Hercules Mata’afa Washington State-he played DT for the Cougars but at only 254 he can’t play that in the NFL. The problem is his numbers show he ‘s not fast enough to play outside. He’s a true tweener that I question what position is he best suited for in the NFL.

CB-Josh Jackson-Iowa-coming in could have been the number one corner taken. He left and I don’t feel that way anymore. 4.56 for wasn’t great and didn’t look comfortable or nearly as smooth in his turns as a guy like Alexander.