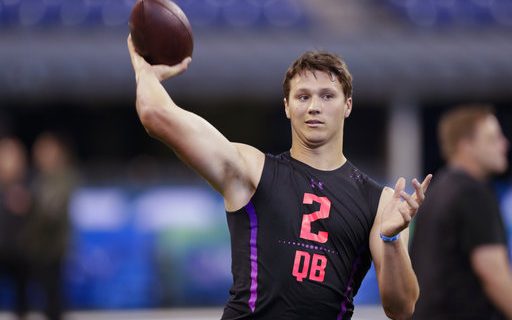 The offensive players wrapped up their Scouting Combine appearance on Saturday.  Now, Bob Gaughan determines who helped themselves and hurt themselves on the field in Indianapolis.

QB-Josh Allen- Wyoming-we knew he had a cannon for an arm and he showed it off in full display. At one point he threw a pass from his 10-yard line to the opposite 24. 66 yards no problem. He ran well 4.75. His accuracy was better in this setting. He was in with the group in terms of accuracy, which is a huge improvement for him.

QB-Baker Mayfield-Oklahoma- scouts polled said that Allen and Mayfield were the most impressive.  I agree as Mayfield showed off his accuracy as the best in the field.

QB-Lamar Jackson- Louisville- He didn’t run and just showed off his arm.  He showed touch and accuracy he needed to show. Talk was his base needs to be improved for accuracy.  This is a good sign for him because some think it’s easier to fix.

QB Kyle Lauletta-Richmond- word is he crushed the interviews with the teams. His on the field work was sharp as well.  Between this and the Senior Bowl he in my mind is clearly a round 2 guy that might not get past New England in round 1.

TE- Mike Gesicki- Penn St- he tested as well if not better than any TE might have ever tested. He was a freak at the combine. Slight problem he didn’t look as freakish on tape.

WR- DJ Chark- LSU– continues his impressive off-season. He started with the fasted 40 time for WR’s in 4.34. He then had the best vertical leap from receivers. Had natural soft hands in drills.

WR-DJ Moore- Maryland– his first victory was when he weighed in at 6 foot 210. That’s a littler better size and frame than expected.  Everyone likes the thicker receiver with speed and power.

WR-Courtland Sutton SMU– was afraid he wouldn’t put up the numbers he did. Had more speed and vertical ability than I thought.  He’s a better athlete than expected and solidified himself as a first rounder.

TE- Ian Thomas- Indiana– how this guy has risen. From on no one radar at the start of the season to another impressive performance at combine. Overshadowed by Gesicki out of the world performance he still helped himself.

G-Austoin Corbet- Nevada– guy has been a fast riser since the Senior Bowl.  He’s moving so fast that Mike Mayock stated he might be close to getting into the first round.

G-Will Hernandez- UTEP– type of mean streak that teams love.  The guards have shown up in this draft. His combine results have continued the great off-season he already was having.

G-Kolton Miller-UCLA– the top tackles took a tumble and the beneficiary of this was Miller. He could be the best of a weak class.

G-Quinton Nelson- Notre Dame– he seems to have been given the designation as best player in the draft regardless of importance of position.

RB-Saquon Barkley- Penn State– he was supposed to have a great combine and he didn’t disappoint. He ran a 4.4 in the 40.  Bills fans hope the talk of the Giants taking him at number 2 is legit.

RB-Nick Chubb- Georgia– he answered the questions about his speed. He tested better than expected.  A tough North-South runner with more speed than originally thought.

QB-Josh Rosen- UCLA- didn’t think he was horrible but he did miss all three out throws. He’s on this list because I expected him to look the best and clearly he was over-shadowed in my eyes by Mayfield and Allen.

QB Luke Falk Washington State– not for nothing but I didn’t see any zip on his passes at all. He was known for his accuracy and then missed everything at Indianapolis.

WR Calvin Ridley- Alabama – a poor vertical jump and broad jump are concerning for a guy that is supposed to win with athleticism.

WR- Auden Tate- Florida State- his 40 time was very concerning 4.69. He has the radius to make great catches but throw him in the Laquan Treadwell comparison as a guy that has the ability to make the tough catch but not the ability to separate with speed.

OT Connor Williams-Texas – coming into the combine there were questions about his ability to play tackle.  His short arm length seems to have sealed the deal.  He’s a guard.

C Billy Price- Ohio State- going back for a second opinion on his pec muscle he injured in the bench press.  If he may not need surgery but depending on how this goes he could slide from the end of the first round to the second round.

OT Orlando Brown- Oklahoma- a disaster.  Only 14 reps in the bench press is embarrassing considering 180lb receivers were doing more.  His 40 time was one of the worst of all-time 5.85.

RB Mark Walton-Miami- for an elusive scat back you expected to see more athleticism.  Disappointing numbers for a guy that I liked a lot.